Operation crack down on Migrants begins across Europe 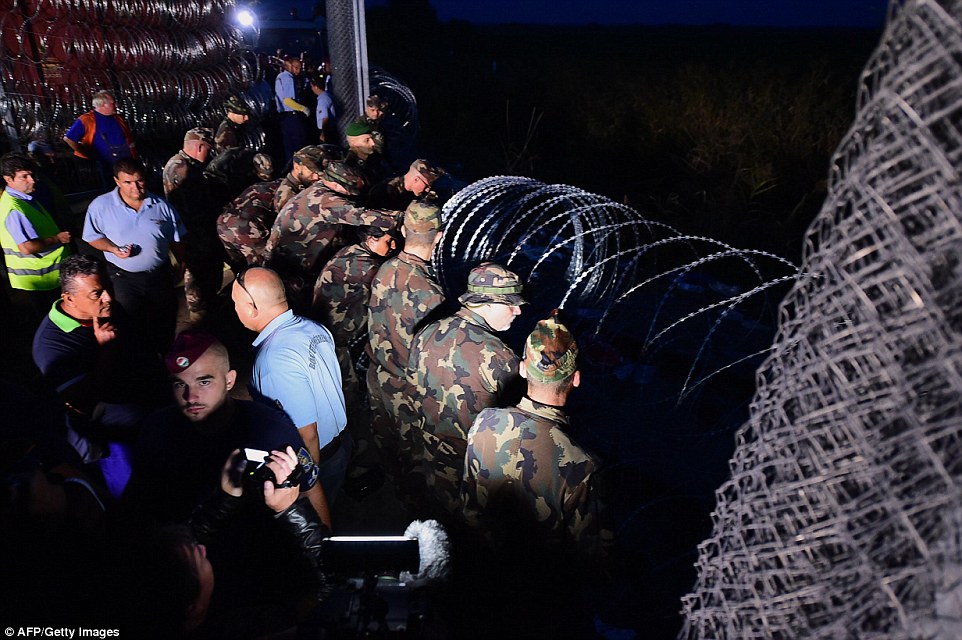 EU governments are today expected to back radical new plans for the detention of “irregular migrants”, the creation of large new refugee camps in Italy and Greece and longer-term aims for the funding and building of refugee camps outside the EU to try to stop people coming to Europe. A crunch meeting of EU interior ministers in Brusselswas also expected to water down demands for obligatory sharing of refugees across at least 22 countries.

ABOVE: The last part of the iron fence is finished by a technical unit of the Hungarian Army at the Hungarian-Serbian border near Roszke tonight 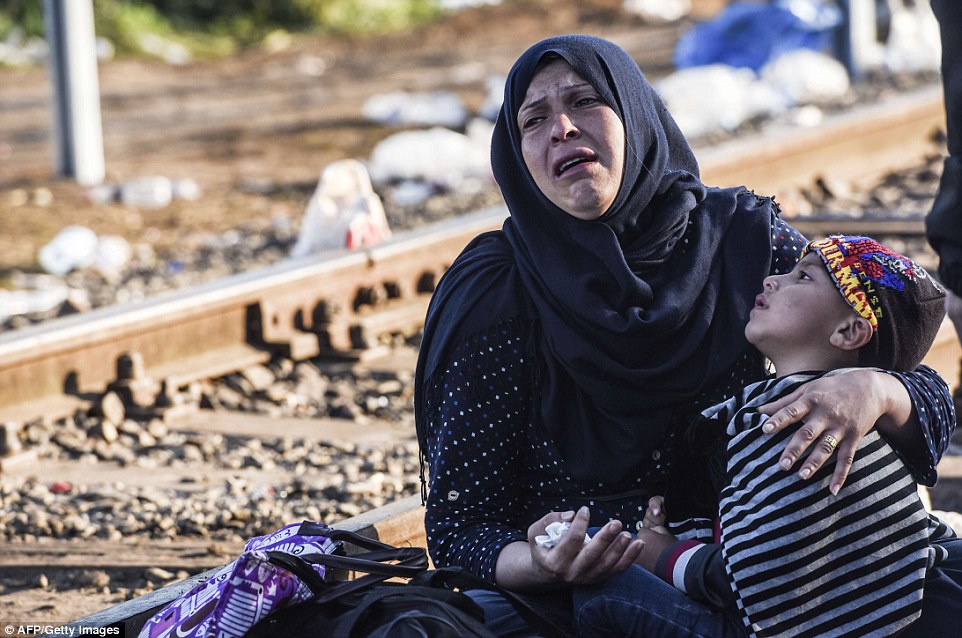 A refugee breaks down in tears as she cradles a child be the side of railway tracks at the Hungary-Serbia border near the town of Horgos. Thousands are expected to cross the border today

Germany on Sunday dramatically halted all train traffic with Austria, after the country’s regions said they could no longer cope with the overwhelming number of refugees entering the country.

Interior minister, Thomas de Maizière, announced the measures after German officials said record numbers of refugees, most of them from Syria, had stretched the system to breaking point. “This step has become necessary,” he told a press conference in Berlin, adding it would cause disruption.

Asylum seekers must understand “they cannot choose the states where they are seeking protection,” he told reporters. 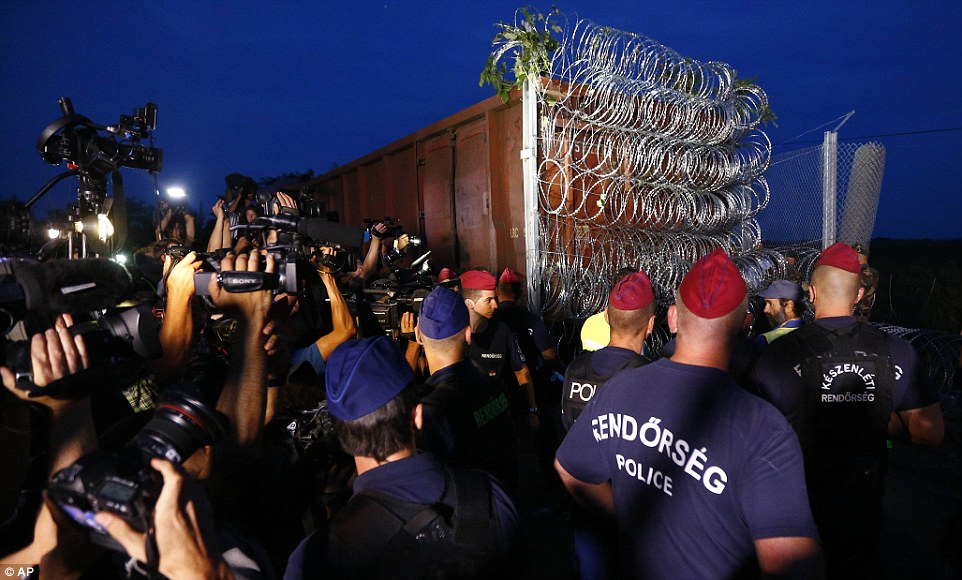 All trains between Austria and Bavaria, the principal conduit through which 450,000 refugees have arrived in Germany this year, ceased at 5pm Berlin time. Only EU citizens and others with valid documents would be allowed to pass through Germany’s borders, de Maizière said.

The decision means that Germany has effectively exited temporarily from the Schengen system. It is likely to lead to chaotic scenes on the Austrian-German border, as tens of thousands of refugees try to enter Germany by any means possible and set up camp next to it. 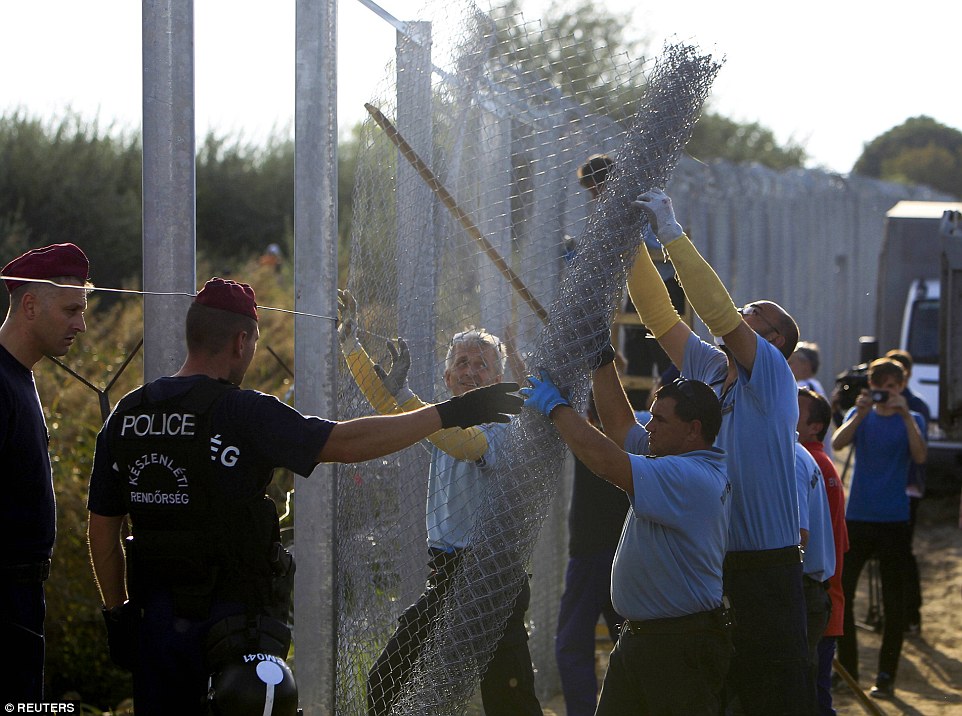 Putting it up: Workers build a fence today along the border with Serbia near the migrant collection point in Roszke, Hungary

Hungary has blocked the main crossing point from Serbia used by migrants as Austria, Slovakia and the Netherlands imposed border controls today. Police closed a gap in the razor-wire barrier along the Hungary-Serbia border as other officers formed a human shield to block off railway tracks.

Meanwhile Hungary’s transport authority said it has closed the country’s airspace in a 12-mile area along the Serbian border up to a height of 4,500ft.

The moves come after it emerged that Hungary was bracing itself for a massive surge of up to 30,000 migrants in just one day. It comes as Serbia attempts a huge ‘push through’ before its neighbour introduces tough new border rules.

A record 5,809 migrants entered Hungary in a new surge on Sunday, smashing the previous day’s record of 4,330, Hungarian police have revealed. The sharp increase came ahead of laws coming into force tomorrow under which people entering the EU country illegally can be jailed. 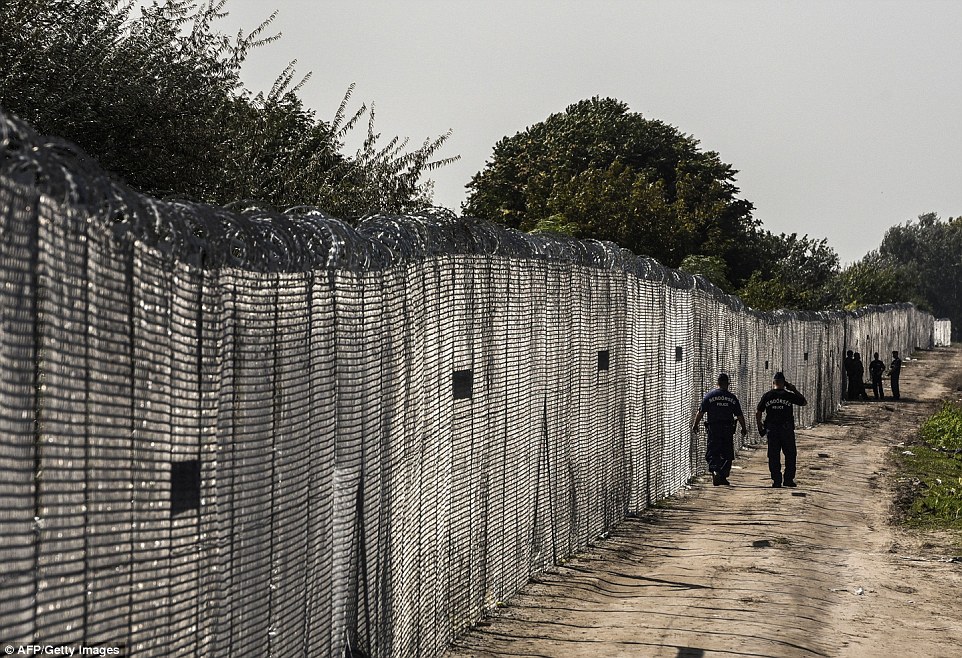 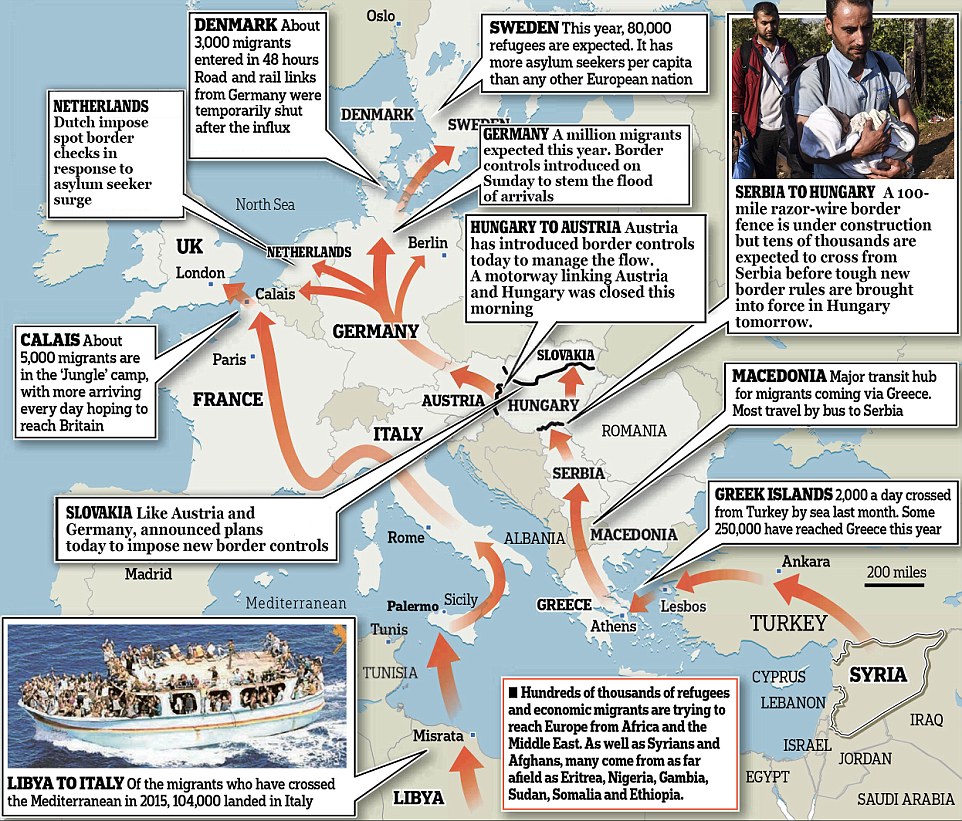 Germany, Slovakia and Austria have started to impose border controls in a bid to control the flow of migrants through Europe

Index.hu reported that Hungary’s neighbour Serbia would try to ‘push through’ as many as 30,000 migrants on Monday before the new Hungarian laws come in to force. Hungarian official sources are quoted as saying Serbia would speed up the provision of buses for the migrants, who enter Serbia from Macedonia after leaving Greece.

Meanwhile, European Union members are on collision course today over proposals to distribute asylum-seekers across the continent – a plan backed by safe-haven Germany but resisted by several states in the east. 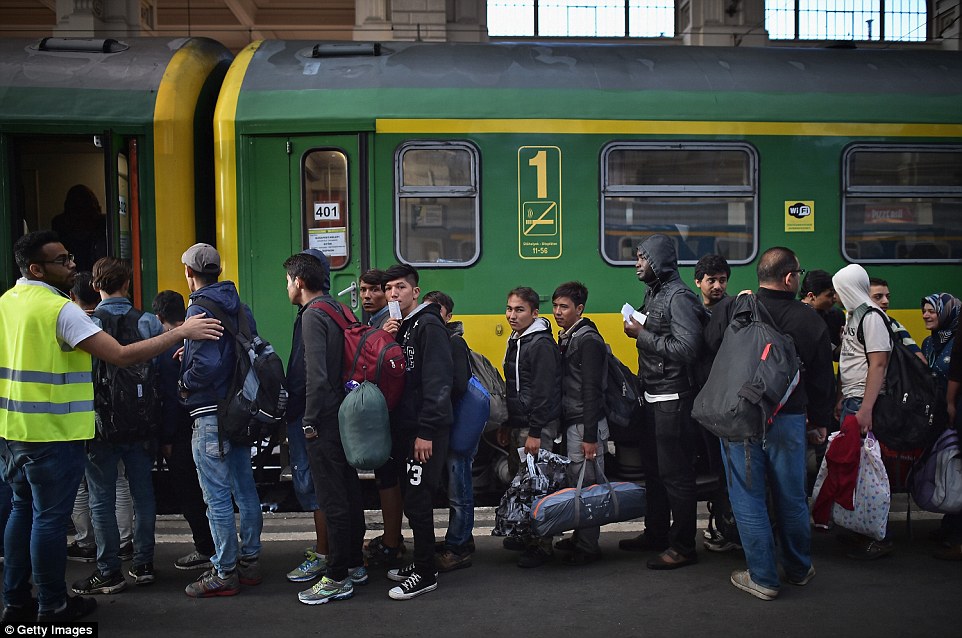 Migrants wait to board a train at the Keleti railway station in Budapest, Hungary ahead of their journey to the Austrian border this morning

Once in Hungary, most migrants seek to travel onto western Europe, particularly to Germany and Sweden, via Austria.

But with tens of thousands crossing its frontiers, German authorities on Sunday decided to reinstate border controls, and all trains between Austria and Germany were temporarily suspended, leaving thousands effectively stranded in Austria.

Hungary’s anti-immigraton prime minister, Viktor Orban, has vowed to push ahead with a controversial border crackdown due to come into force at midnight. The UN claims that his government is transporting migrants from the Serbian border to the Austrian frontier ahead of the change. 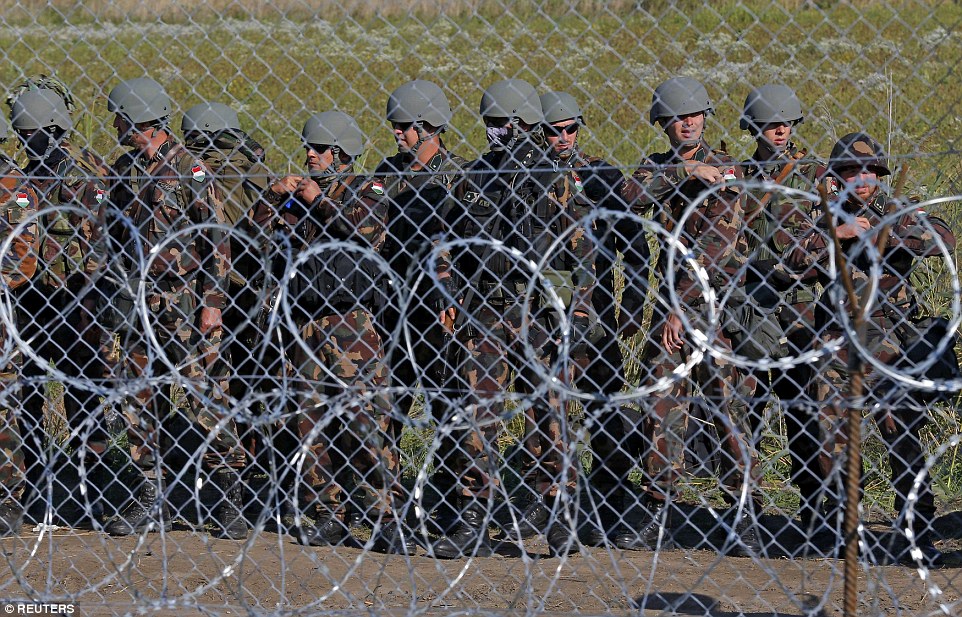 In addition to the new laws, Hungary is also building a controversial 13ft fence all along its 110-mile border with Serbia. Hungary is set to introduce tough new border rules under which people entering the EU country illegally can be jailed. Hungarian soldiers are pictured near the border fence 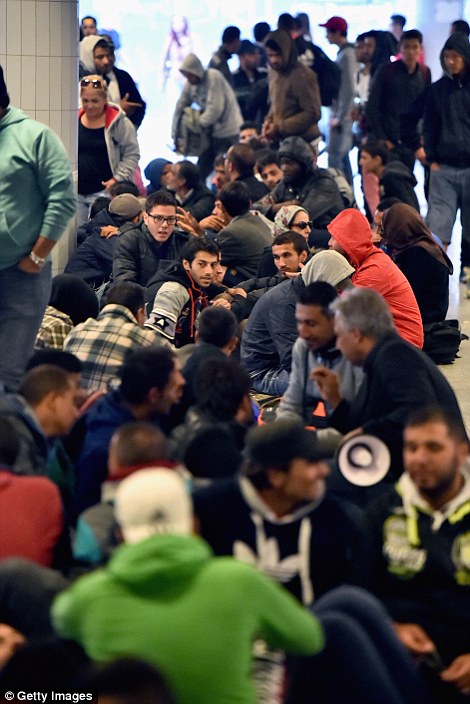 David Cameron has traveled to Lebanon to defend Britain’s much-criticised response to the crisis. He insisted that hundreds of thousands of refugees from the Syrian civil war have been discouraged from “risking their lives” to travel to Europe by British aid totalling £1bn.

The UN’s refugee agency has warned that tens of thousands of refugees face roaming Europe in “legal limbo” after the reintroduction of border controls. It said: “UNHCR is concerned that the combination of different, individual measures might create a situation where large numbers of refugees seeking in Europe the protection they are entitled to receive in line with international law, will find themselves moving around in legal limbo.”

Germany’s vice chancellor Sigmar Gabriel has predicted that the number of refugees his country will accept this year will rise to one million. He also said he hoped that new border controls would only be temporary.

The UN’s human rights chief has praised the British public response to the refugee crisis in the face of “long-standing xenophobia” from the press and some politicians. Zeid Raad al-Hussein also called for “expanded channels of regular migration and resettlement” in Europe.

The UK home secretary, Theresa May, is leading Britain’s resistance to EU-wide refugee quota at an emergency meeting of interior ministers in Brussels. Arriving at today she said: “What we need to do urgently is set up registration centres so that people are properly fingerprinted and registered when they arrive in Europe.”