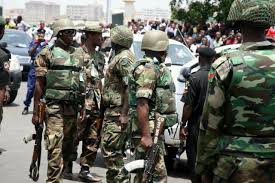 The spokesman of the taskforce, Lt.-Cdr. Thomas Otuji, in a statement on Friday in Yenagoa, said troops raided five shrines at Debe and Ikot Ofing in Akpabuyo Local Government Area of Cross River on Thursday.

He said that troops on covert operation in Esighi waterside of Cross River apprehended a suspected militants’ leader found with charms, while another suspected leader was picked up at a hideout in Ikpa Road, Uyo.

Otuji also said that the air component of the Operation Delta SAFE during a reconnaissance patrol at Onne in Rivers, sighted barges of 15,000 litres of petrol concealed with green grass.

He said that the oil thieves had connected a hose linking the site to a wellhead from where crude was siphoned.

He said that a kidnap victim, Mrs. Roseline Duku who was abducted by gunmen at Afiesere junction in Ugheli North Local Government Area was rescued by troops in response to a distress call.

Otuji said the victim’s RAV4 car with registration number FST 927 was, however, abandoned by her abductors along Ejode Road in Ughelli while being pursued by troops.

He said, “Troops in conjunction with the police and local vigilance group rescued the victim at Ekapkamre, Ugheli North LGA, Delta.

“Furthermore, troops deployed at Koluama in Bayelsa trailed and arrested a notorious pirate known as Labiesta, who attacked innocent citizens at Ogubene creeks.”

Otuji said that the militant had been on the wanted list of security agencies.

He said that the successes recorded by the troops in the ongoing operation were traceable to the timely information provided by members of the public and resilience of the troops.

He restated the commitment of the troops to degrade the capacity of criminals in the Niger Delta region and pledged to provide a safe environment for legitimate business to thrive in the region.