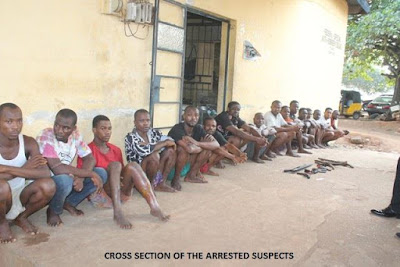 The Imo State police command has announced the arrest of over 25 criminals terrorising the state following the ctivities of “Operation Nkpochapu Phase two”.

News of their arrest was made known to newsmen in a press statement issued by the state Commissioner for Police [CP], Mr. Taiwo Lakanu and obtained by Elombah.com.

The statement was read by the command Public Relations Officer, Mr. Andrew Anwerem on Tuesday in Owerri.

Mr. Lakanu said that some of the suspects had been charged to court, while others were still undergoing investigation.

Lakanu said that the Nkpochapu declaration would guarantee maximum security in Imo especially this festive period.

He said that a criminal, Obinna Onuoha, who was declared wanted by the police, was arrested by the command on Dec. 4.

He added that the suspect had confessed to have murdered four persons at various occasions in recent time.

He said that Thankgod Igwe, the leader of a five-man gang, who led his group to terrorise five different families Umuagwa Obazu and shot one person on his right hand, had also arrested.

Lakanu said that officers of the command raided a motherless/destitute home Ragina Ceali in Aboh/Mbaise, owned by Mrs Patricia Nwachukwu and arrested numerous pregnant women suspected to be child traffickers.

Mr. Lakanu stressed that the police would make the state inconducive for criminals.

He, therefore, said that those of them who wished to repent still have opportunity to do so.

Gone Too Soon: A tribute to The oracle, Wole Sodipe