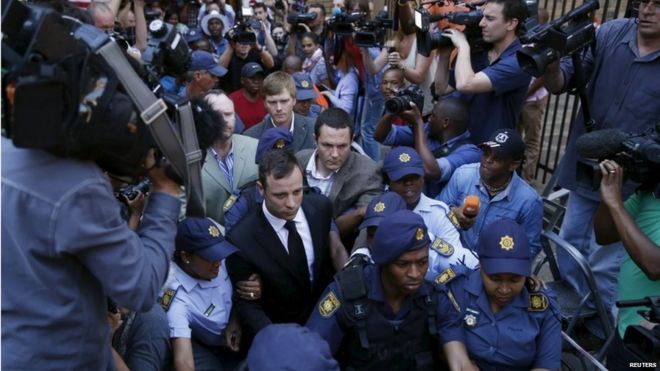 Olympic and Paralympic athlete Oscar Pistorius, jailed for killing his girlfriend, is to be freed from prison to house arrest next Tuesday, a South African parole board says.

He was sentenced to five years in prison in 2014 after being found guilty of culpable homicide, or manslaughter.

He shot Reeva Steenkamp through a locked bathroom door but said he thought she was an intruder.

The prosecution has appealed, saying he should instead be convicted of murder.

That case is expected to be heard on 3 November.

Pistorius has spent 12 months in jail and will now spend the rest of his sentence under what is termed in South Africa “correctional supervision”, the parole board said.

An earlier decision to release him in August was blocked by South Africa’s Justice Minister Michael Masutha, who said it had been made “prematurely”.

At the time, Ms Steenkamp’s family had said that 10 months behind bars was “not enough”.

Responding to Thursday’s decision, a lawyer speaking for the Steenkamp family said her parents had expected the early release even though they opposed it, adding that nothing could bring back their daughter.

The Pistorius family has said they have received the news of his planned release, but are not making any further comment.

During his house arrest, Pistorius is likely to face restrictions in terms of gun ownership and may have to continue getting psychotherapy, reports the BBC’s Nomsa Maseko from Johannesburg.

The making and unmaking of Oscar Pistorius

The double-amputee shot to global fame after competing for South Africa at both the Olympics and Paralympics in London in 2012.

Subsequently, the killing of his girlfriend, who worked as a model, in February 2013 attracted worldwide attention.

His trial was broadcast live both domestically and around the world

Beyond Buhari’s cabinet lies a silver lining for the Igbos