Osinbajo Aghast At The State Of Murtala Muhammed Airport 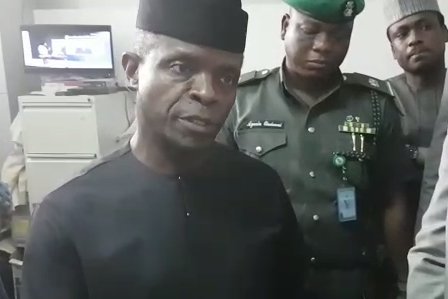 During the visit, Osinbajo declared an urgent task to correct many of the problems already identified by the Council.

Speaking briefly with the press after inspecting several parts at the airport for over an hour, Prof. Osinbajo said the visit was in line with the work of PEBEC.

According to him, “as part of our work on the Ease of Doing Business, on making the environment friendly, not just for local businesses but also for those who want to come and do business in Nigeria, the airport obviously is one of the major places where we need to ensure that facilities are working and that things are being run properly.”

Continuing he said, “so we have looked around, we’ve seen some of the equipments.

During the unscheduled visit, the Acting President checked out the toilets, noticed some of the non-functioning carousels in the arrival hall.

He went to Immigration officials to check the progress of plans to grant visa on arrivals to foreign investors.

He also observed the non-functioning air-conditioners and chillers in the Departure and Arrival halls, the escalators and elevators that are in a state of disrepair among several others.

He was accompanied on the trip by the Aviation Minister of State Hadi Sirika.

At Tuesday’s meeting of PEBEC, Prof. Osinbajo had said “we are trying to improve the business environment in three broad respects;

1. the entry and exit of goods,

2. the entry and exit of persons into Nigeria, and then,