Over 2,000 APC Members In Benue State Defect To PDP 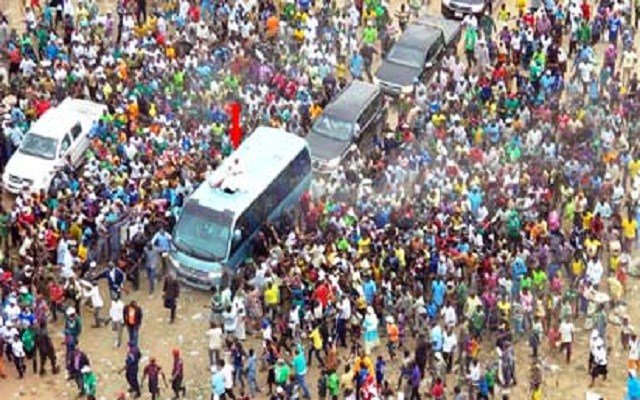 Over two thousand members of the ruling All Progressives Congress [APC] in Benue State have, over the weekend,  abandoned the party and switched allegiance to the opposition Peoples Democratic Party [PDP], Elombah.com has learnt.

Amongst the throng were two former aides to Benue State Governor, Samuel Ortom, and one-time governorship aspirant under APC.

The said Ortom’s former aides, as gathered by Elombah.com are:

Meanwhile, the gubernatorial aspirant in the 2015 elections is Mrs. Hellen Ode.

The ceremony was held at Okpoga, headquarters of Okpokwu Local Government with the state chairman of PDP, Mr John Ngbede, as well as the former Minister of Interior, Mr Abba Moro, on hand to welcome them.

According to our correspondent, some of the decampees numbering hundreds of members had earlier decamped to the APC from PDP at the inception of the current administration.

Speaking at the event, state chairman Ngbede described them as prodigal sons and said that It is good they realised their mistakes and retraced their steps back to PDP.

He noted that the returnees had become members of PDP family again and promised that the party would not discriminate against them.

Speaking, Abba Moro said the returnees have been convinced that they were hoodwinked into joining APC while presenting them to the party.

Moro said: “I said it during the re-run election in this senatorial district when many people I always refer to as ‘Food is ready politician’ left the PDP to join the ruling party.

“But today, they have discovered that the party in power is deceitful.

“All eyes have seen it with the manner the people of the state have been impoverished.

“They have decided to leave the comfort zone to come back to suffering zone so that tomorrow will be better”.