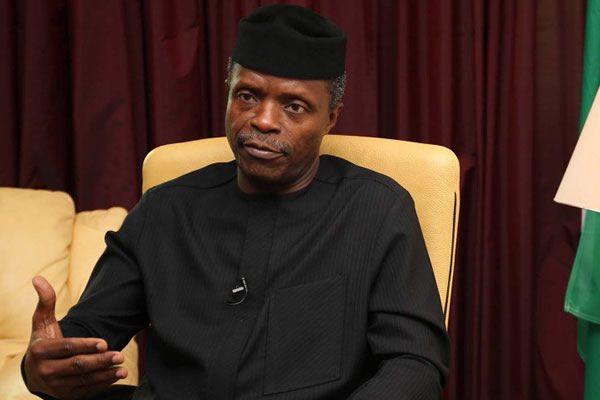 Acting President Yemi Osinbajo, SAN, is sending a five-man Federal Government delegation to Anambra State today to visit and condole with the government and people of the state over last Sunday’s attack on worshippers at the St. Philips Catholic Church in Ofufe-Amakwa, Ozubulu, Ekwusigo Local Government Area of the State.

That despicable attack resulted in the loss of a number of lives and injury to several others.

During the visit, the delegation will present a condolence letter from the Acting President Osinbajo on behalf of the government and people of Nigeria to Governor Willie Obiano.

The delegation will also visit Bishop Hilary Okeke of the Roman Catholic Diocese of Nnewi, and the Nnamdi Azikiwe University Teaching Hospital also in Nnewi to meet with some of the victims of the attack still in the hospital.

In the letter, Professor Osinbajo extends deep commiserations to the families, friends of the victims, and the Ozubulu community on the death of their sons and daughters, praying for the speedy recovery of the injured still in the hospital.

The Acting President condemned in very strong terms the atrocious and dastardly act which has brought sorrow to many innocent families and, has rightly provoked widespread condemnation.

He said “such barbaric act constitutes an affront to our common humanity, and it challenges, but will not overwhelm our collective resolve to rid our communities of all forms of violent crimes and criminality.”

Professor Osinbajo said the Federal Government under President Muhammadu Buhari remains undeterred and will continually commit to deploying all available resources towards ensuring adequate security of lives and property in Anambra State and across the entire country.

The Acting President noted that he has instructed law enforcement agencies to bring perpetrators of the heinous crime to justice without any delay.

He said he would remain engaged with Governor Obiano, the Police authorities and other security agencies to ensure that the lives and property of citizens of Anambra State and indeed all Nigerians are well protected anywhere they may live.

Senior Special Assistant on Media & Publicity to the President

Office of the Acting President