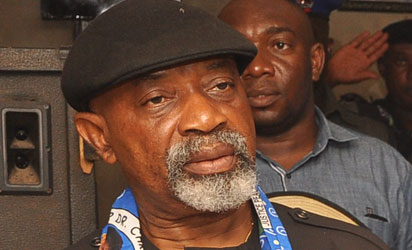 Truly, against all things, it is possible to provide security. But against death, all men, mortals alike, dwell in an unfortified city. Death is indeed a necessary end,

which must come when it will and yet such an unwelcome guest everywhere, every time. Our fear of it makes us play safe, block out emotions and pretend it exists only in the esoteric world, which, in itself, is a losing game.

Yet, if there is one death to celebrate, it is this one. The passage of a sage, Ozo Akunnia Pius Okonkwo Ngige, the patriarch of Umu Ngige Clan in Alor, Idemili South Local Government Area of Anambra State, on September 4, 2015, at a near Guinness Record age of 105 years. And in a country where life expectancy is well below 60 years, this age could well pass for a national record.

The life and times of the late Ozo Akunnia Pius Ngige, the father of Senator Dr.  Chris Nwabueze Ngige, OON [pictured above], a Medical Doctor turned Politician and Chief Emeka Ngige, SAN, two nationally acclaimed of his seven children, were characterized by many legacies. He certainly made his life, while it lasted, so sublime and upon departing, left very bold footprints on the sands of time, especially in his love and belief in education.

His legacies span both public and private sectors where he made such solid marks and provided succor, happiness and livelihood to countless dependents and strangers alike who grew under his huge wings. To his children, particularly, he went out of his way to provide the best of education. This made it possible for all the seven of them to emerge as graduates and top flight professionals in the 70’s and early 80’s. This, in itself, was yet another record at that time.

Pa Pius Ngige attained Standard Four, the highest level of education obtainable in the Idemili part of the Eastern Nigeria, having passed out from Central school Nnobi. The closest schools that offered Standards 5 and 6 levels were at that time located at Amawbia and Ajali, and others farther away. Despite his zeal to continue, the distance and other logistical problems made it impossible for him to do so as trekking to school was the only means of getting to the nearest school. Amawbia was then 25km and Ajali 30km respectively from his home town Alor.

In the intervening year, coupled with the transfer of his headmaster, he eventually opted to learn the trade of buying and selling at Onitsha, trade being the other popular alternative. This movement was in 1933 having stayed at home for one solid year tending to his fathers sheeps, goats and cattles. At Onitsha he changed his mind and decided to learn an artisan trade – carpentry –  instead of the buying and selling and became an apprentice carpenter for 2 (two) years.

Pa Ozo Ngige learned carpentry at Onitsha under late Mr. Zephaniah Emefo and went and obtained tradesman test certificate at Enugu and thereafter, joined the Public Works Department (PWD) of the Eastern Nigeria Colonial Government, where he built a reputation for himself in the area of house (building) roofing and ceiling. He joined service as Assistant Foreman Building (Carpentry) and rose to the position of Supervisor Building (Carpentry). He was in the team that worked with the colonial masters to build many health centers under the One Health Center Per Village Scheme, especially in the Old Onitsha Province of the Eastern Region. These Health Centers stand today as rock of Gibraltar in Ojoto, Alor, Oba etc with their roofs and ceiling standing till date.

Unlike most Igbo men then, who would easily send their wards to buying and selling he was ready to give up anything to see his children educated and become better than him, Pa Ozo Pius Ngige was trying to fulfill in his children and his relatives the level of education that opportunities could not avail him and so insisted that all his children must be educated. For this reason too, he had to push his younger brother Chief Alphonsus Ngige through Primary School and then College of Immaculate Conception (CIC) Enugu and offered all his relatives who wanted to go to school scholarships. Those he couldn’t do alone he got other cousins to join in the bigger family contributory scholarships emphasizing that an educated person has been equipped against poverty and diseases.

Though a strict disciplinarian who would “spare no rod and spoil the child”, he did not want to appear to be conscripting them but he made it clear that even those who wanted joining any form of trade should do so only after receiving a minimum of secondary education in flying colours. His calculation was that if only they could study to pass excellently, pursuing higher education would then become more attractive to them than going into trading. It turned out that way, as his children became very distinguished, starting with the first daughter/child, the late Mrs. Azuka Onwuka a professional teacher of French language and mother of Dr. Chike Onwuka, a renowned Consultant Cardiologist based in the USA.

Other children are Ugodinobi Edwin Ngige, a United States (USA) trained Accountant, Barrister (Mrs.) Bene Nwachukwu – a high flight nursing matron, who veered to read law up to bagging LL.M in University of London, and who also trained her children in same vein and today has 2 USA based Medical Consultants in Gastroenterology and Traumatology, Dr. Ikenna Nwachukwu and Dr. Ben Uche Nwachukwu respectively.  Mrs. Maryrose Nwadike who also read Law (LL.B) at the University of Ife (now Obafemi Awolowo University – OAU) and LL.M in University of Lagos (UNILAG) and now a reputable Immigration Attorney based in the United States.

The other legacy was his penchant to fight for the downtrodden, an activist spirit he passed to most of his children. As a Supervisor, it was his duty to raise memos for the regularization of casual workers (“daily paid” as they were called then) when they had served 1-2 years. This was often refused by the white superiors, as keeping the casual workers as daily paid was cheaper and gave such workers no rights to agitate for better welfare.

When one Mr. Ashfield, the Technical Officer who supervised his Building Department and the overall supervising, Engineer Smith chauvinistically refused yet another memo, Pa Ozo Pius Ngige encouraged the workers to press for their rights, and for three days, the casual workers due for conversion refused to show up for their usual daily pay and passed the message that they would show up only when it had been announced that they had been gainfully employed as regular or permanent staff.

When investigations revealed Pa Pius Ngige to be the main support base of the casual workers’ strike, the authorities placed him on 3 months retirement notice. But rather than accept the 3 months or plead for leniency, the no nonsense Pa Pius Ngige instead, placed the PWD office on one week retirement notice and left it thereafter, not minding that he had made no plans for retirement and was wandering into an uncertain future.

As a stoic, for Pa Ozo Ngige conversely, the impending suffering for himself and his young family was a preferred option than staying under servitude in his own country in the hands of the colonial whites. And the wind of Independence was already blowing strongly in Nigeria then!!

His pillar of support and dear wife, the late Mrs. Priscilla Ngige, welcomed the sad development with equanimity, and having started her petty trading in coal from the Coal Corporation and other buying and selling items sustained the family for months until Pa Ozo Ngige set up his private building firm, P. O. Ngige and Sons Enterprises in 1959, and established himself as a subcontractor to the many big contractors like Michellettin, Costain WA and Eastern General Contractor (EGC) then major contractors of the University of Nigeria, Nsukka and other Government Building Construction Projects of the Regional Government, in the days when Dr. Nnamdi Azikiwe was Premier of the Eastern Region.

He left an enviable legacy in the area of community service as well and as a man of unimpeachable character, all the organizations he co-founded or joined trusted him with the office of the Treasurer, as they were certain that their coffers was safe with him. Such organizations as Indigenous Federated Association of Nigerian Contractors, East Central State, which he co-founded in 1971. As an acclaimed Community Leader, he championed community development in Alor his home town, under the aegis of the then Alor Progressive Union (APU), where he served its Enugu branch again as Treasurer for several years as well as in the church as a devout catholic.

When you lose someone, the world still turns, the stars still shine and the wheels of time move inexorably on but somewhere deep within your soul, a small part of you dies. But when the legacies of the departed are so many and so rich, and when such legacies are branches of the same old tree, there is enough solace that such legacies live on and shall endure into time.

For instance, Senator (Dr.) Chris Ngige is one of the many chips of that old block, with so much of the old man’s judicious instincts. He came out of the Secondary School with Div I Distinction and read Medicine and passed out of the University of Nigeria Medical School, Enugu in flying colours in 1979. Like the late sage stood for justice, progress and development, especially for the down trodden and less privileged so does Senator Ngige.

As Governor of Anambra State he refused to join the elite group who brought him to power to plunder the State, which earned him the inimitable status as the only abducted sitting Governor thus far in Nigeria. He laid solid foundation, which his two successors Peter Obi and Willie Obiano have built upon. That Anambra State has numerous if not the best road network amongst the states in Nigeria and has a buoyant economy – the Government that can boast of paying salaries and pensions were all due to Ngige’s footstep and financial wizardry opening up many new revenue windows and placing salaries and pensions on 1st line charge.

So, “Death be not proud, though some have called thee

Mighty and dreadful, for, thou art not so…

One short sleep past, we wake eternally,

And death shall be no more; Death, thou shalt die (too then)”. (Parenthesis mine: Apologies John Donne). Pius Ngige has defeated Death after cheating death by living upto 105 years!!

Rest, great one; your numerous legacies shall endure as your large footprints run so deep and indelible and will shape time to come. You live on, for you came and saw and conquered. Adieu Okwodike, Adieu Igwodo, Adieu Ozo Akunnia!!