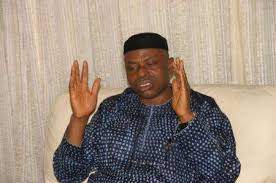 The incumbent governor of Ondo state, Gov. Olusegun Mimiko’s eight-year tenure will end on Feb. 23, while Mr Rotimi Akeredolu (SAN), the Governor-elect will be sworn-in on Feb. 24.

The All Progressives Congress (APC) in Ondo State has alleged that the outgoing Gov. Olusegun Mimiko had approved N500 million as “parting gifts“ to political office holders.

The APC, in a statement by its Publicity Secretary, Abayomi Adesanya, on Saturday alleged that the money was from the state Local Governments Joint Account.

“We have authoritatively gathered that Gov. Olusegun Mimiko, whose tenure expires in 12 days’ time has approved a take-home package of N500 million (taxpayers’ money) as valedictory packages for the 18 council chairmen. “Other beneficiaries of the parting gifts are officials of the Ministry of Mineral Resources, who oversee the Ministry of Local Government and Chieftaincy Affairs, and Mr Governor himself.

“Each of the council chairmen and senior civil servants (names withheld), who are involved in facilitating the documentation and perfection of the loot, are to part with N20 million, while Mr Governor goes with a lion share of N300 million. “We want to warn the Accountant General of the state and permanent secretaries not to succumb to pressure by Mimiko and his cronies to milk our state dry before the expiration of their tenure. “There shall be commensurate negative consequences for every wrong actions or inaction. “The action is a daylight robbery of the commonwealth of the good people of Ondo State, ’’ the statement read. Adesanya warned banks and other financial institutions in the state not to get involved in any “shady deal’’ with this outgoing government. Efforts to get reaction of the Chief Press Secretary to the Governor, Mr Eni Akinsola, were unsuccessful as calls to his cell phone were not picked.

Lagos Marathon ,One of top ten in the World – Ambode