Pastor Biodun Fatoyinbo Replies Busola: I’ve Never Raped Before, Not Even As An Unbeliever

The embattled founder of Commonwealth of Zion Assembly (COZA) Abuja, Pastor Biodun Fatoyinbo, has threatened to sue celebrity photographer, Busola Dakolo, for alleging he raped her when she was 16-years.

Busola, wife of popular singer, Timi Dakolo, had accused Pastor Biodun of raping her as a minor in a video making rounds on the internet.

In the YouTube video interview he granted Chude Jideonwo, Dakolo claimed the incidents left her shattered and traumatised.

The viral video attracted wide criticisms and outrage on social media from a wide spectrum of readers calling him names.

Reacting, the embattled pastor, through the official Instagram page of the church said that he has never raped anybody not even as an unbeliever.

Fatoyinbo stated this via a public statement debunking the allegation wherein he stated that even as an unbeliever, he never raped a woman.

Fatoyinbo finally broke his silence on Friday evening, denying he did rape Busola or anyone for that matter.

In a statement, the embattled Pastor said: “I have never in my life raped anybody, even as an unbeliever and I am absolutely innocent of this.

“Busola Dakolo, who has made this false allegation and her family attended the church during the early start of the church in Ilorin in 1999.

“I never had any private interactions with her beyond my pastoral duties. Looking at her status and that of her husband, I am dumbfounded why she would say such a thing.”

The pastor further threatened to sue Busola Dakola for spreading damaging falsehood against him and the church.

According to him: “The leadership of the church and I have briefed our lawyers to commence criminal and civil actions against all individual making such false allegations whether directly or by proxies.

“We will as a church pursue every measure within the ambits of the law to bring the culprits to justice.” 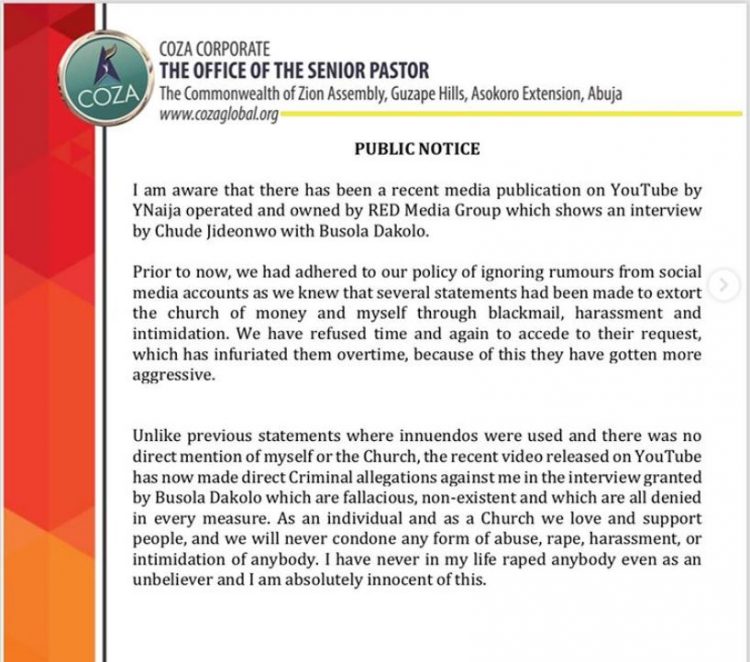 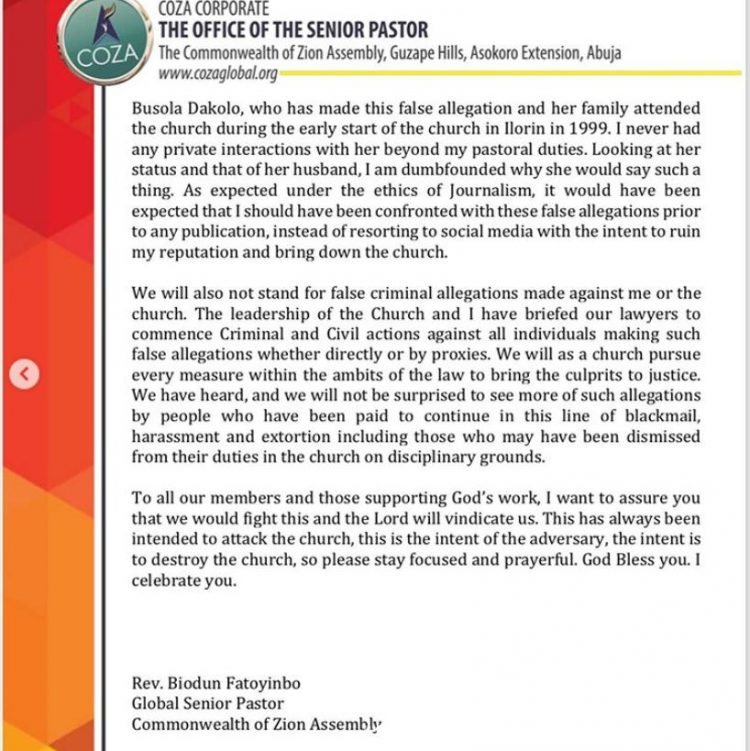