Pastor transfixed while trying to destroy a shrine in Ogun State 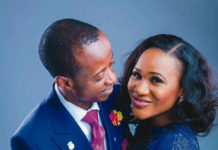 A pastor, identified as Wale Fagbere, became paralysed while trying to destroy a shrine in Ketu, a community in Ayetoro, Yewa North Local Government Area of Ogun State.

Our correspondent gathered that the pastor whose church could not be ascertained as of the time of filing this report reportedly became motionless and speechless after he had allegedly destroyed some shrines in the town.

It was gathered that the cleric was reported to have told his congregation that he had a revelation to destroy all the shrines in Ketu community.

After being found transfixed in the shrine, residents of the area raised the alarm, following which custodians of the shrines came to the place.

The priests insisted that they had to perform some rites before the cleric could regain his sense.

The rites were performed following the intervention of Alaye of Ayetoro, Oba Abdulaziz Adelakun, who appealed to the priests to ‘release’ him.

The state acting Police Public Relations Officer, Abimbola Oyeyemi, confirmed the incident, adding that the cleric might be charged for “sacrilege and malicious damage.”

He said, “The command got the report at its division in Ayetoro that one Evangelist Wale Fagbere went to Ketu to destroy traditional worshippers’ shrines. After the destruction, the man became motionless and could not talk.

“When the policemen visited the place, the traditionalists said the subject could not be taken away until some rites were performed. The victim was revived and handed over to his family for more spiritual cleansing.”