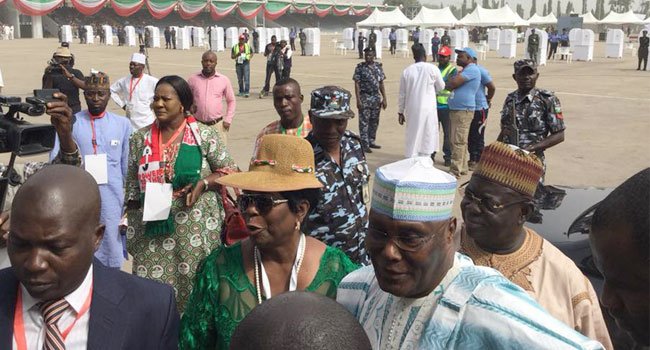 It is no longer news that the change mantra is a fraudulent transaction gone sour. Everywhere in Nigeria, people are yearning  for a new direction. An immediate  change to the evil change that has destroyed the foundation of the country.

There is no single geo-political zone that is enjoying the dividends of good governance. Not even the President’s zone.

Sadly, the APC Federal Government is doing nothing to address the situation.  Instead, the President points to a hired crowd as his only consolation that he may survive  the political tsunami that will sweep away  his non-performing administration and the  APC.

It is on the premise of the woeful performance of the APC Federal Government that the December 9 and 10 PDP National Convention in Abuja  became crucial to the revival  of the country.  All well-meaning people, irrespective  of political affiliation prayed for its success. Those without political  inclinations  also prayed hard for its positive outcome.

The APC Federal Government was scared. Therefore, they  hired moles in the PDP and the media to disparage and run up to the  PDP National Convention.

EFFORTS TO DERAIL THE PROCESS

Realising the importance of the convention to the 2019 General Election and the revival of the nation’s  future, leaders of the APC  and their planted allies within the PDP fought it.

The desperation  was such that APC media outlets published at frightening intervals concocted  reports that misled PDP members.  They bandied series of allegations  against principal PDP leaders  to generate mistrust and political tension.

Indicted drug baron, Buruji Kashamu was  instructed by the APC Leadership to sign endless advertorials questioning the hosting of the National Convention. He threatened fire and brimstone, if he was not allowed  to have his way.

Sheriff’s yeoman, Deji Adeyanju, though a member of the APC, led other paid online agents to cast  aspersions  on PDP leaders working for the success of the convention.

Several APC columnists joined  in the media warfare against the hosting of the convention.

These vicious attacks did not influence the resolve of PDP leaders and members.  They were determined to set in motion  the process for the recovery of Nigeria, from a clueless and non-performing administration.

The failure of falsehood and propaganda meant that the PDP National Convention in Abuja must take place. The last 48 hours were used for last minute consultations, endorsements  and alignments.

Rivers State Governor, Nyesom Ezenwo Wike and other leaders of the zone moved over to Abuja to consult with PDP  leaders from the other five geo-political zones.

The last minute consultations were premised on earlier reach-out by the governor to all the states and leaders.  The outcome was  encouraging.

By Thursday evening, endorsements had come from all the geo-political zones. Of course, a few dissenting voices cried out in the media. But they were in the minority.

THE SENTIMENT OF MICRO-ZONING

Faced with the reality of the preference of PDP  members from across Nigeria, those under the tutelage of the APC resorted to singing  the false micro-zoning song.

This micro-zoning  song was deployed as a blackmail tool to derail  the rebuilding process which was meant to throw up the best candidate with the required track record of party management to re-position the PDP.

Out of the two zones, the South-South has a comparative advantage because the party has the structural foundation to set up the revival machinery for the party. This position was appreciated  by many in the South-West as the voting pattern has shown.

Several speeches were delivered at the PDP National Convention in Abuja. All of these speeches had a thematic focus. This is the time to rescue Nigeria from a failed administration.

Speaker after speaker agreed that the successful conduct of the National Convention would be key towards reclaiming  the country for the good of the long suffering people.

However, Former President Goodluck Jonathan and Former Vice President Atiku Abubakar aggregated  the feeling of Nigerians  towards  the failed administration.

Atiku said: “We must unite as a party to secure the trust of the Nigerian people again because under the APC, Nigeria is not working and our people are not working.

“The APC promised a war on corruption but all they have delivered is war on the opposition, with handouts for their cronies and handcuffs for their opponents”.

Former President Goodluck Jonathan said “We plead with those who will win the elections today to carry everybody along. I charge all those that are contesting one position or the other to imbibe the PDP spirit.

“Politics is grassroots business. Party leaders must go to the grassroots to tell the people that the PDP will reclaim lost grounds; Let me tell all those being persecuted today to know that the persecution will expire one day”.

This is the unique selling point of the 2017 PDP National Convention in Abuja. It was transparent and credible.  Every single process was televised, while INEC was on ground to monitor. It was broadcast on all social media platforms.  Nothing was hidden.

There was no parallel convention  anywhere in the country because all interest groups had confidence in the process.

The approved  delegates list was availed  all contestants a day to the election.  No candidate  raised any objections.

Even on the day of the convention, leaders of the South-West met and compelled candidates  from the area to withdraw from the National Chairmanship election.

Adeniran, Uche Secondus and High Chief Raymond Dokpesi slugged it out. The three of them voted alongside  their supporters.

After submitting  themselves  to a transparent voting process, Professor Tunde Adeniran and High Chief Raymond Dokpesi decided to stage  an exit drama. They blamed their defeat on the unity list drawn up for convenience. They kept quiet on the Revised Unity List.

However, High Chief Raymond Dokpesi staged a return to admit that the delegates have spoken.

Addressing journalists after casting his vote for different candidates at the National Convention at the Eagle Square in Abuja on Saturday, Governor Wike said  with the successful convention PDP has been repositioned to serve as a credible  opposition  against  the ruling All Progressives Congress (APC).

He said: ” This election has been quite credible.  It has been  very transparent.  Done in the full glare of the world.

“We are prepared  to be an opposition as expected  to the ruling party come 2019”.

Commenting on those who are still criticising the process, Governor Wike expressed  surprise  that anyone would fault the process that created room for the exhibition of true democracy.

“If you  have not done your homework well, you come forward to cry foul. Even an election  as organised as this, somebody  will still cry.

“You have an exam and you don’t prepare, but you expect to win. “, Governor Wike said.

DESIRED LEADERSHIP TO CHANGE THE CHANGE

Prince Uche Secondus, elected by over 80percent of the delegates to be PDP National Convention brings to the table high level  of experience in electoral victories, party management and membership mobilisation.

The party administrator popularly called “Total Chairman “, also brings  to the table, integrity, courage and loyalty  to the PDP. The two other defeated candidates, Professor Tunde Adeniran and High Chief Raymond Dokpesi are silent officials 1 of the ADPD, an alternative platform they created.

Prince Uche Secondus understands the mandate given to him by the members of the PDP.

Here him after his election: “By my understanding, the mandate you have given us today is clear and unambiguous. It is to return our party to power come 2019. As Herculean as this mandate seems, I know it’s achievable. My campaign pillars for this election are ‘To Rebuild, Reposition and Regain’.

“Let me assure you great members and leaders of our party, that by the grace of God and with all hands on deck, the brief tenancy of the All Progressives Congress (APC) in Aso Rock Villa expires on May 28, 2019. By this, we serve them a quit notice.

“This has to be immediate, in order to save our beloved country from disintegration. We are all witnesses to how the unity of this country has been shaken to its very foundation under the watch of the rudderless and clueless APC”.

After the PDP National Convention , the APC  hired propaganda merchants in the traditional and social media began the Plan B to de-market the new leadership and the party. Majority of the major newspapers and electronic media on Sunday and Monday threw up narratives  that suggested that the National Convention was compromised.

Only a few published in detail facts about the convention. They promoted information on the Unity List which had Prince Uche Secondus, but played the Ostrich on the Revised Unity List which contained Professor Tunde Adeniran.

The worst was the unprofessional and unethical question that Channels Television Maope Ogun lifted from the social media. She asked the immediate past Chairman of the PDP National Caretaker Committee, Senator Ahmed Makarfi why $20,000 was shared to sway voters. This was weird, ridiculous and sad. It was a mischievous attempt to give life to the rumour circulated by the APC United kingdom on her Twitter and Facebook platforms.

A NEW DIRECTION FOR PDP

The success of the National Convention has proved beyond reasonable doubt that party leaders and members are determined  to chart a new direction  to redeem the country.

The country’s present predicament is a fallout of the success of the 2015 evil communication that was unleashed by the APC and her media allies.

This new direction for Nigeria should begin  from Rivers State where the people through the guidance of Governor Nyesom Ezenwo Wike understood that the APC and her media surrogates were liars from the pit of underdevelopment .

That the APC has nothing to offer is clear to all. That Nigeria needs a new direction is a point of agreement  to all. The PDP has commenced the process towards reclaiming the country by electing a powerful National Working committee, despite  the attempts to distract the party from achieving the National Interest of changing the evil change.