PDP: The Challenge Ahead ~ By Jideofor Adibe

Former Senate President, Senator David Mark, has become the latest entrant to the ever-growing crowd of candidates vying to become the PDP’s presidential flag bearer. Senator Mark, a former Brigadier-General who was president of the Senate from 2007 to 2015, promised to restructure the country if elected President.

According to him, restructuring the country is “an idea whose time has come.” He contended that a restructured Nigeria would help to strengthen our bond of brotherhood and unity as it would help to give everyone a sense of belonging.

He promised to live with the outcome of the primaries to select the party’s flag bearer, arguing that he would never defect if he lost:

“I will stay in the PDP to contribute my quota to the rebuilding and restructuring of the party. This is democracy; winners emerge and losers go back to the drawing board to rejuvenate”, he was quoted as saying.

An interesting question is why the PDP is attracting such a long list of aspirants. 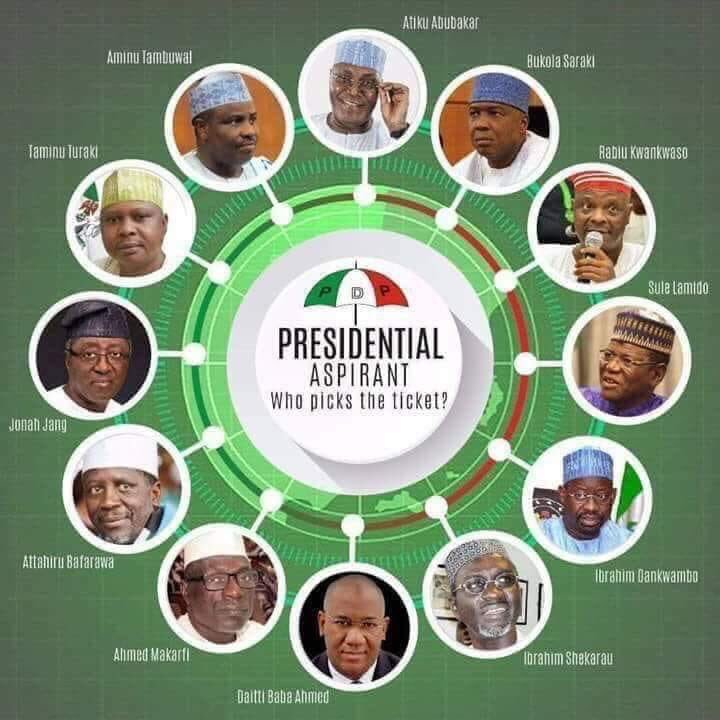 Though the PDP prefers to explain this with the spin that the party has an abundance of presidential materials that are especially attracted to the level playing field that it offers, there is certainly more to it than the formal spin.

I feel that while many of the candidates feel convinced they can make a difference and are genuinely in the race to win, it can also be surmised that some are in it for other reasons – to become critical stakeholders in the party or extract concessions from the party when it begins the inevitable horse-trading to whittle down the list of contestants before the primaries or sets up a committee to engage the losers after the primaries.

It is also possible that some are in the race to force certain issues on the national agenda  (such as ‘restructuring’) or  to make a statement (such as testing their ‘Northerness’) while yet others may be in the race out of   ‘me-tooism’ – a copy-cat ideology that says that  if A can be a presidential contender, so can I.

I believe that the long list of presidential aspirants presents opportunities and challenges for the PDP. Among the opportunities it presents are improved income flow from the sale of expression of interest and nomination forms (expression of interest form for the presidency costs N2m while nomination forms cost N12m) and the constant marketing of the PDP and de-marketing of the ruling APC as the candidates criss-cross the country looking for support to realize their political ambitions.

Given that most of the presidential aspirants are newsworthy individuals on their own, their activities and politicking ensure that the party is constantly in the news as a viable alternative to the ruling APC.

The sheer number of aspirants also embodies a coded message that there may be something about the PDP that is a pull factor to the candidates.

Apart from the fact that the APC ticket has virtually been ceded to Buhari (an exorbitant expression of interest and nomination forms pegged at N45m could be a deliberate strategy to dissuade all-comers from entering into the fray), the relative cheapness of the PDP’s expression of interest and nomination forms offers candidates of various intentions a national platform to test the waters.

Some of the inevitable challenges from having such a long list of presidential contenders   will be how to handle candidates who lose and refuse to be pacified or accept a deal – especially if the number of such ‘refuseniks’ are so large as to raise questions about whether the party has truly learnt from its past mistakes of arrogance and imposition of candidates – as it often claims.

Though it is unlikely that many who decamped from the APC will so quickly return to their vomit, it is possible that some of the losers  may remain in the party only to work against the eventually winner. Politicians being who they are, it may not be ruled out that a few can find reasons why their ‘people’ or ‘supporters’ prevailed on them to return to the APC.

Boko Haram, the danger of kidnapping students & the fate of…

The hypocrisy of a nation: Between ambition and…

Can losers in the PDP’s primaries defect to a third party to achieve their ambition? This will depend on what actuated the candidate’s interest in joining the race in the first instance. But realistically speaking, a third party is unlikely to make much impact in the 2019 elections. There is simply not enough time for such a party to establish effective structures across the length and breadth of the country.

What is the impact of the gale of defections from the APC to the PDP on the latter’s perception by Nigerians?

While such defections are essentially geared at creating a moving train narrative to entice others into jumping into the bandwagon, the APC appears to have smartly blunted whatever political capital the PDP hopes to reap from that by engineering its own high profile counter defections from the PDP to its fold, starting from the defections of Senator Akpabio to those of former Governors Emmanuel Uduaghan of Delta State and Ibrahim Shekarau of Kano State.

News of political defections, no matter how profile that person may be, has gradually lost its political capital and allure.

Who should the PDP choose as its flag bearer? That will be the billion Naira question. Just as none of us comes perfect, the candidates have their own strengths and structural issues that count against them.

For instance while Atiku is probably the most prepared for the office and also probably has the best name recognition, he has Obasanjo as an albatross – in addition to whether the political kingmakers will feel comfortable supporting him, given his wealth and independence.

Senate President Saraki has proved a dogged political fighter. However while he is geographically from the North (Kwara State), he is linguistically a Yoruba. How will he for instance choose his running mate? And will the crucial North-east and North-west accept his ‘northerness’?

David Mark faces a similar challenge.  Dr Datti Baba Ahmed comes with youth and zeal but probably without the name recognition of the likes of Atiku, Tambuwal and Saraki. Essentially it is not going to be an easy choice.

If the elections were held today, which party will win?  The political coast will remain foggy until the PDP selects its candidate and the real campaign begins.  What is clear is that the election will not be won or lost on Buhari’s performance or lack of it because performance is relative.

What is certain to play a crucial role in the elections is the fear factor. The PDP is already playing the game by lapping onto the apparent misuse of state agencies (such as the siege laid at the National Assembly complex by the DSS and the recent raid on the home of elder statesman, 91-year old Edwin Clark by the police who claim they were searching for arms) to warn people that a second term for Buhari would mean a return to his autocratic past.

Buhari ran a very brutal military dictatorship in the country – second only to Abacha’s.

The PDP also cajoles Buhari’s key handlers by reminding them that “he who rides on the back of a tiger will inevitably end in the tiger’s stomach”, implying that what they will get if Buhari wins a second term will be worse than the marginalization that many of them complained about after they helped him win in 2015.  Whether such would dampen their enthusiasm for Buhari’s re-election or make them ‘double agents’, remains to be seen.

The APC plays its own fear factor – by harping that a vote for PDP would mean a return to what it often called “16 years of PDP misrule”, which it liked to claim was characterized by  ‘treasury-looting’ and ‘cluelessness’ .

Boko Haram, the danger of kidnapping students & the fate of education in…

The hypocrisy of a nation: Between ambition and ‘our-ambition’, Yahaya…