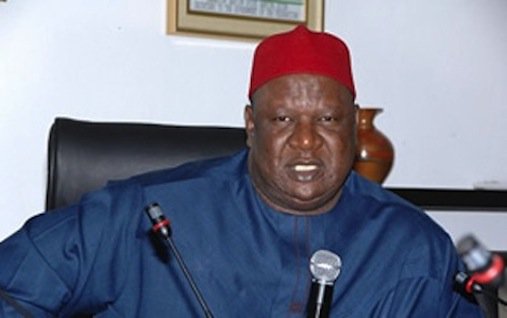 Pius Anyim had been under investigation for allegedly collecting N520m from a former National Security Adviser, Col. Sambo Dasuki (retd.), on the eve of the 2015 presidential election.

The Economic and Financial Crimes Commission has secured a remand warrant to further detain Anyim Pius, who was arrested by the EFCC last Thursday.

Pius Anyim, a former Secretary to the Government of the Federation,  allegedly awarded contracts worth N13bn to companies he had interests in, according to EFCC.

The remand warrant, it was learnt, would enable the anti-graft agency to keep Anyim in custody beyond the stipulated time allowed by law.

The move, according to EFCC, is to enable its operatives to conduct proper investigation into how he got the money, what it was used for and who the beneficiaries were.

A source at the EFCC said, “Yes, we have obtained a remand warrant to hold the former SGF for about 30 days. This will help us to conduct investigations properly and verify his claims.”

Apart from allegedly receiving funds from Dasuki, the former SGF was accused of false assets declaration and using proxies and companies in which he had interest to corner contracts from the ecological funds.

The source said Anyim allegedly awarded contracts to some companies linked to him through which ecological funds were diverted.

“From this fund, three of the companies linked to Anyim, Foundation Years, Obis Associate and Eldyke Engineering, received contracts worth over N13bn. Foundation Years alone received a net payment of N10,308,017,838.85 between 2014 and 2015.

“Curiously, on receiving the fund, Foundation Years and another Anyim company, Br-Kthru made several transfers to 37 entities. Some of the organisations and individuals have no nexus at all with ecological issues. Investigators are probing the reasons behind the wild disbursement.”

A House of Representatives panel had in March asked the EFCC and the Code of Conduct Bureau to investigate Anyim and a former FCT Minister, Bala Mohammed, over the Centenary City project. According to Punch.