Operatives of the Nigerian Police have busted a 7-man criminal syndicate that specializes in the manufacturing and supply of locally fabricated AK-47 rifles and ammunition.

This was disclosed in a press release issued by the Force Public Relations Officer at Force Headquarters in Abuja, CP Frank Mba.

The suspects, it was gathered, supply rifles and ammunition to bandits in forests along the Kaduna-Abuja expressway and funtua – kankara expressway in Katisina State.

Some suspects believed to be behind the ammunition factory were paraded by police. 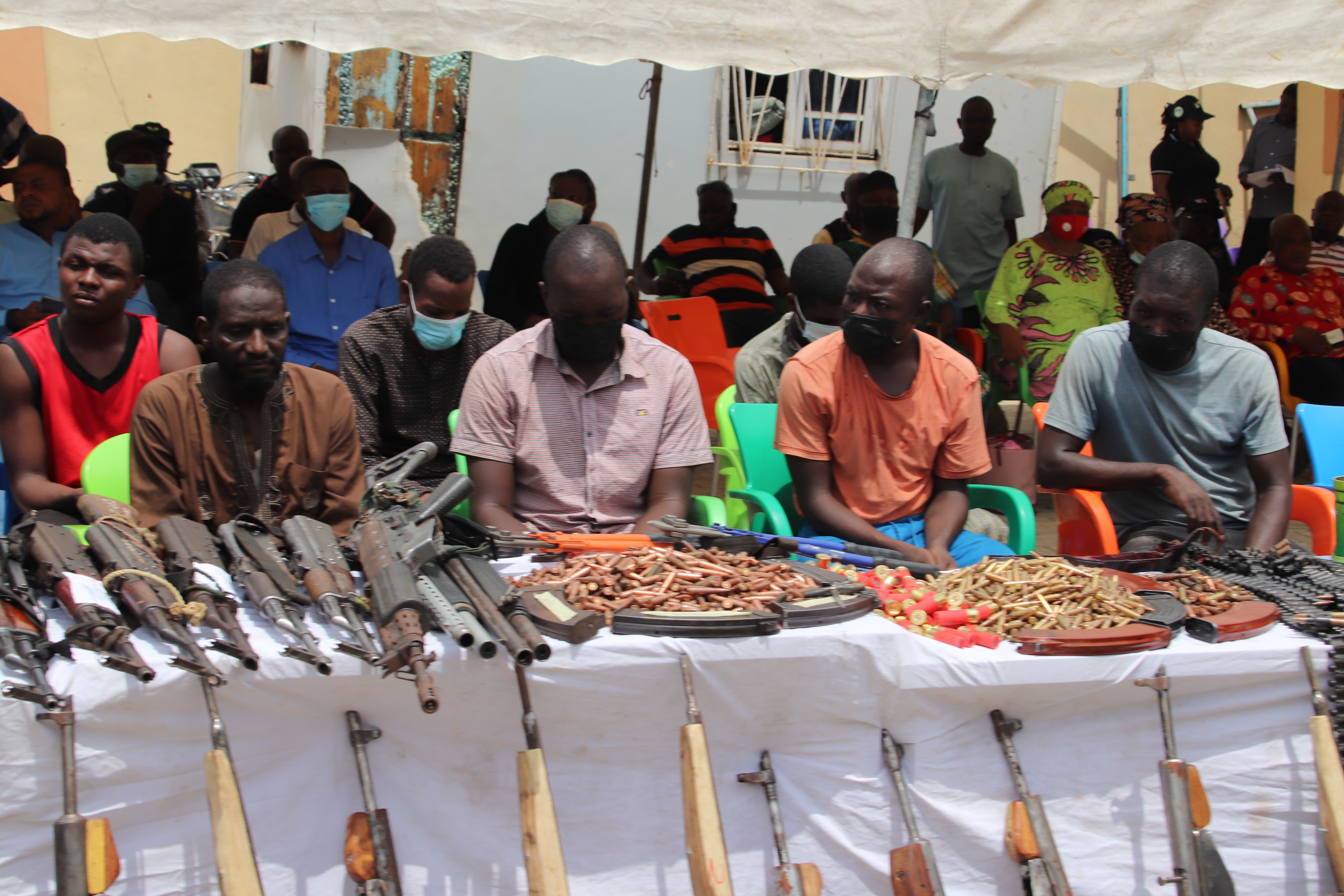 “Following the ongoing implementation of a robust security action plan to protect citizens and critical national infrastructure across the country, operatives of the Nigeria Police Force, have arrested a total of eighty-four (84) notorious criminal suspects within the past one month.

“The suspects were arrested for their involvement in series of violent crimes including terrorism, banditry, kidnap for ransom, possession and proliferation of illegal weapons, armed robbery, unlawful production of vehicle number plates etc.

“While many of the suspects were arrested in follow-up on cases of violent crimes under investigations, many others were arrested after being subdued following gun duel with the police who took the battle to the doorsteps of the criminals.

“Notably amongst the cases is the arrest of four (4) members of a notorious criminal gang responsible for carrying out some of the high-profile kidnap for ransom operations in the Federal Capital Territory (FCT), Kaduna, Niger, Katsina, Bauchi, and Plateau States.

“Investigations revealed that the gang are linked to series of kidnap for ransom crimes including the kidnapping of some senior staff of the Ahmadu Bello University, Zaria, family members of notable political appointees and business entrepreneurs in Kaduna State and other contiguous State.

“Investigations revealed that the suspects were at an advanced stage of operationalizing their plans to kidnap a Catholic Bishop in Zaria, when they were apprehended.

“Investigations further revealed that the gang, in addition to their kidnapping enterprise, also supply arms and ammunition to Bandits at Birnin Gwarri, kaduna State, Niger, Katsina and Zamfara States.

“Similarly, the Police team arrested a 7-man criminal syndicate that specializes in the manufacturing and supplies of locally fabricated AK-47 rifles and ammunition to bandits in forests along the Kaduna-Abuja expressway and funtua – kankara expressway in Katisina State.

“In a similar vein, one Abubakar Mohammed a.k.a Mallam Buzu from Mali who is a transnational gun-runner was arrested by the Police team in Tsamiya, a border town between Benin Republic and Nigeria.

“He was arrested with a GPMG ammunition chain drive with holding capacity of 1,600 rounds of ammunition. 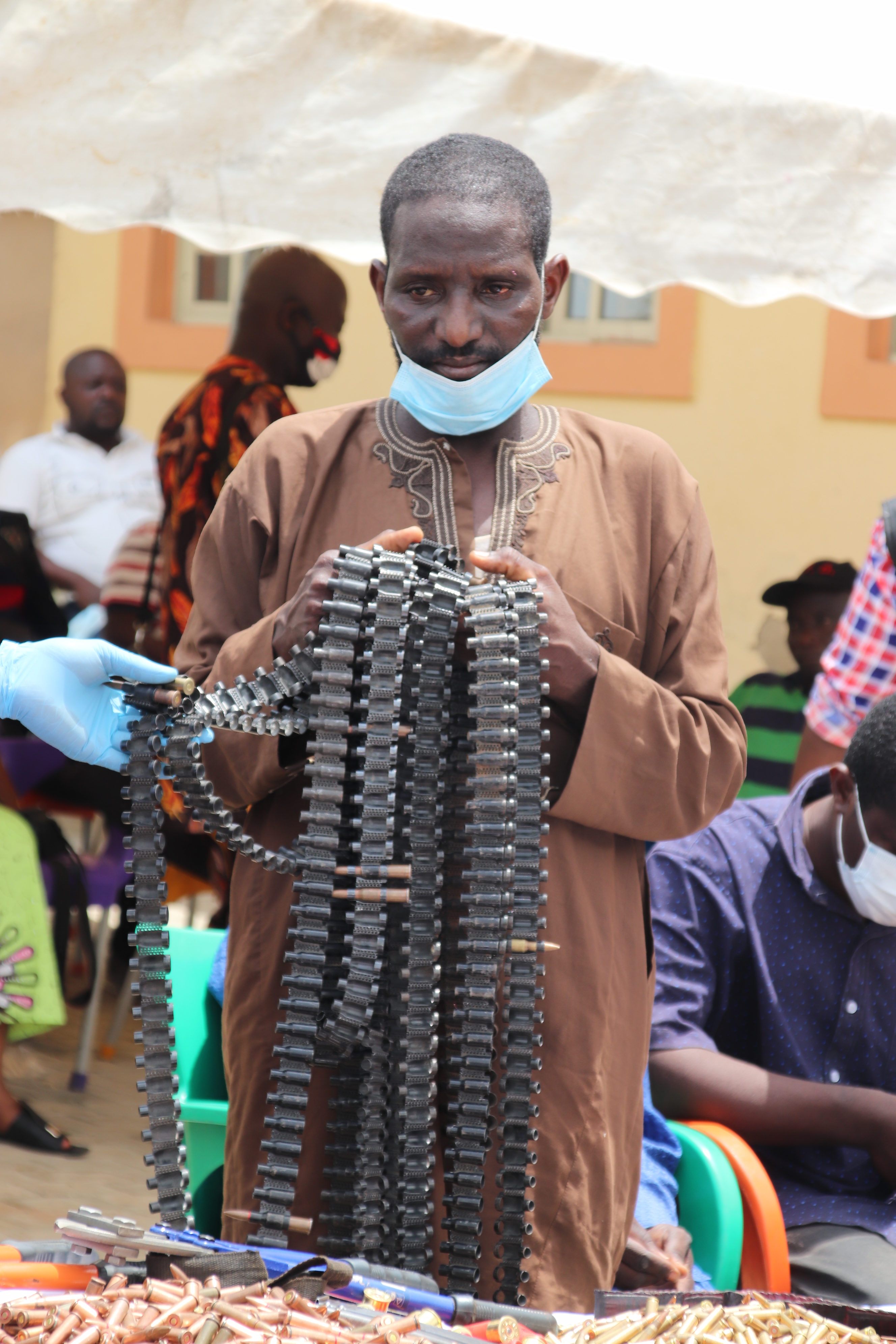 “In addition, three (3) suspects responsible for production of fake vehicle number plates including replica of number plates of government, diplomatic and security agencies were arrested.

“Investigations revealed that the suspects supply the number plates to criminal elements who use same to beat security checks during their operations.

“A total of eighty (80) fake number plates were recovered from the gang.

“The Inspector General of Police, Ag. IGP Usman Alkali Baba, psc (+), NPM, fdc, while affirming that the kinetic and non-kinetic approaches targeted at re-ordering security in the country are already yielding positive results, reassures citizens of the renewed commitment of the Force to the fight against crimes and criminality.

“He calls for sustained support for the Police and the security community as efforts are intensified to enhance public safety, peace and security.

“All the suspects will be charged to court on completion of investigations.”

FRSC commander says use of bicycles can reduce road crashes