The police have paraded suspected members of the Indigenous People of Biafra ( IPOB) in connection with the killing of a police inspector in Nnewi, Anambra state.

The IPOB members were said to have been involved in an attack on police patrol teams, which led to the death of the inspector.

A divisional police officer (DPO) and some other personnel were also wounded while a patrol van was set ablaze during the incident on Friday.

The suspects were paraded on Sunday. 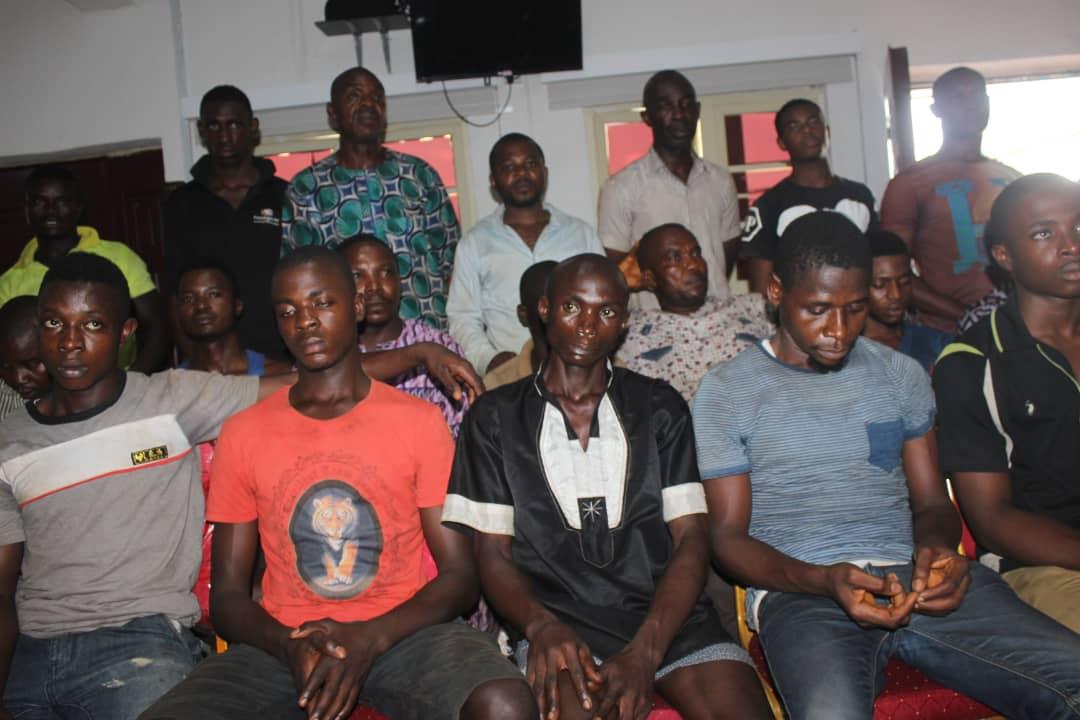 The Inspector General of Police, Ibrahim Idris has paraded no fewer than thirty-three(33) suspects accused of being members of the proscribed Indigenous People’s of Biafra (IPOB)

They were accused of masterminding the killing of a police Inspector, setting ablaze a police patrol vehicle and the loss of two AK47 riffles and a Berretta service pistol at Nnewi at the weekend.

said the 33 persons would soon be arraigned in court under the Terrorism Prevention Amendment Act 2013 and other capital offences like Murder, Attempted Murder, Rioting Looting, Stealing and Malicious Damage of Government Property/Police Vehicle.

This was coming amid protestations by traders within the commercial town of Nnewi that these so-called suspects were nothing but traders who were bundled away from their shops by the police when the officers arrived to disperse a peaceful procession by the IPOB at the weekend.

The traders accused the police of being “afraid to confront a much -organized and seeming disciplined IPOB, instead they chose to whisk traders away from the confines of their shops and some passers-bye.

That this was why every shop in the commercial city closed abruptly.

The arrested persons were aged between 17 and 65 years, including students, visitors and passers-by who were simply at the wrong place at the wrong time.

According to Mr Moshood, “The Inspector General of Police has directed the Commissioner of Police, Anambra State to carryout intense search operations for the recovery of the two (2) AK47 rifles and one Beretta Pistol with the ammunition snatched from the slain Police Inspector and other Police Officers wounded by the proscribed IPOB members, and should also immediately carryout an operation to rout-out and arrest other fleeing suspects (proscribed IPOB members) who participated in the ambush of the Police personnel and bring them to justice.”

The FPRO noted that “…on 23rd November, 2018, there was intelligence report that  members of the proscribed Indigenous People of Biafra (IPOB) an unlawful Terrorist organization were sighted gathering in their hundreds with dangerous weapons near Teaching Hospital, Owerri Road, Nnewi about to cause disturbance of Public Peace and public safety in the Nnewi and Environs.

“Consequently, Police Patrol teams led by the Area Commander, Nnewi, ACP Nnanna Oji Ama mobilized to the scene to prevent them from causing breakdown of law and order and mayhem, and destruction of lives and property.

“The Police Team, while proceeding to the scene came under ambush from the IPOB members, in the process, a Police Inspector was killed, two (2) other Police Officers were seriously injured and one Police Patrol vehicle was set ablaze, and the proscribed IPOB members snatched and carted away two (2) AK47 Rifles and one Beretta Pistol with ammunition.

“The IPOB members subsequently attacked other innocent people on sight with machete and other dangerous weapons as they marched towards the Agboedo Market shouting “NO ELECTIONS WITHOUT REFERENDUM.

“The injured Police personnel were rushed to the Hospital for medical attention where the Inspector later died, while the other Police personnel are currently under intensive care in the hospital.

“The Thirty Three (33) suspects (IPOB members) arrested for the killing of the Police Inspector, inflicting injury on others and setting ablaze a Police patrol vehicle are now in police custody and undergoing investigation.

“The Joint Police Intervention Force deployed are carrying out confidence building patrols and crime prevention operations to sustain the peace and normalcy that have been restored and prevent any breakdown of law and order in the affected area and other parts of the State”.

It was dramatic as the suspects kept protesting in the presence of the police officers that the accusations of killing a police inspector and snatching of arms as read out to journalists by Moshood was completely false.

They said there was nothing of such that occurred and that eyewitnesses said the police inspector was knocked down by one of their patrol vehicles when the officers were using the vehicles to knockdown the IPOB people that were running away from them.

They also wondered how police see it that people with bare hands would confront and “kill” fully armed team police officers.

“That the arrested and paraded persons were mostly traders in Nnewi market who had finished their business for the day and were about to close shop before they were arrested long after the protesting members of IPOB had left.

One Evangelist Sunday Ilonze said he and his servant were arrested in his shop while packing up for the day.

He said, “I came back from a burial and didn’t even know what had happened during the day and was ordered by some gun-wielding police officers to go into the vehicle, but I refused because I am a law abiding citizen, but they brought me here,” he said.

Most of the suspects cried all through the parade, insisting that they were innocent and should not be allowed to suffer for a crime they did not commit.

But when journalists confronted Mr Moshood with these findings assured that a thorough investigation would be launched into the matter, and those found culpable would be charged to court for terrorism.

Half the battle is lost