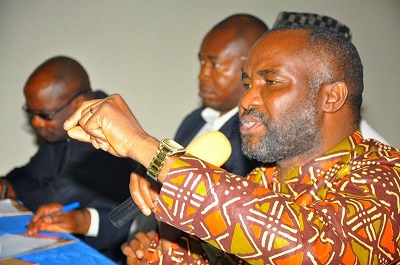 The Rights group has also likened to a North Korean model, the current operational styles of the Department for State Security (DSS) and the failure of the Federal Government to introduce comprehensive measures to check police involvement in mass extra-legal executions of suspects in underground and decrepit detention cells.

The Rights group has therefore called on genuine and credible civil society leaders with non-partisan bent to speak out before the basic Freedoms recognised by the constitution are thrown over- board by overzealous and politically biased top officials of Federal Security agencies.

HURIWA fears that the outrageous politically tainted operational mode of Nigeria’s secret police if not checked by the National Assembly through effective oversight supervisions then Nigeria may unfortunately kiss good bye to real democracy and respect for fundamental human rights.

“Nigerians of all walks of life have a collective national duty to ensure that the growing forms of oppression of independent voices and the clamping into detention  of peaceful protesters in the guise of prosecuting them for treasonable felony by security forces are brought to rapid halt but the only way to achieve that if for the citizenry to embrace such civil rights actions such as mounting g democratic pressures through peaceful forms of protests and civil disobedience mechanisms to force government to continue to act in conformity with the requirements and revered principles of constitutional democracy as clearly and unambiguously enshrined in the Constitution of the Federal Republic of Nigeria of 1999 (as amended )”.

HURIWA also for the umpteenth time has demanded the release unconditionally of the Director of the Europe Based Radio Biafra and leader of the Free People of Biafra (IPOB) Mr Nnamdi Kanu who has been detained in oppressive and inhumane conditions in clear breach of the ruling of the court of law.

HURIWA warned government at the center to allow the civil populace in all parts of Nigeria exercises their constitutional freedoms of Right to Freedom of Association and Speech without let or hindrance as a way of arresting the speedy degeneration of Nigeria into a North Korean type police State under a totalitarian President.

In a statement signed jointly by the National Coordinator Comrade Emmanuel Onwubiko and the National Media affairs Director Miss Zainab Yusuf, HURIWA said millions of Nigerians are going through unpardonable harsh economic situations made worst by the failure of the current Muhammadu Buhari’s government to strategically map out measures and implement the economic blueprints that would promote greater economic empowerment of millions of Nigerians and liberalise the economy by ensuring the implementation of policies that enables small and medium scale enterprises to blossom.

HURIWA said since President Muhammadu Buhari has delayed the composition of the Federal Executive Council for five months and thereby derailing Nigeria’s economic progress, there was need for the cabinet to be sworn in as early as Monday to swing into action without further procrastination since the 36 ministerial nominees have now successfully been confirmed by the Upper Chamber of the National legislature.

On how Nigeria under President Buhari is transforming into a North Korean type of dictatorship in all ramifications, the group said.

The emerging fact is that some ‘fat cats’ with close proximity to the powers-that-be were instrumental to the hasty implementation in September 2015 of the Treasury Single Account just so they can fleece Nigeria of over N50 Billion as one percent commission for private ‘consultancy services’ for the transfer of over 5 trillion Naira from commercial banks into the so called TSA with the Nigerian Central Bank.

This shows that sooner rather than later Nigeria may look like North Korea right under the nose of President Muhammadu Buhari if Nigerians fail to speak out.

HURIWA queried the propriety of hiring private consultants to rip us off just for transferring funds from commercial banks to the so-called TSA and urged that government should scrap the above offices since it always have recourse to private consultancy firms to provide services for which government agencies are heavily maintained with tax payers money.