Politicians, treachery is thy name; the story of Boris Johnson

“Brexecuted”, “Tory Day of Treachery” and “The Real Game of Thrones” – a dramatic twist in the Conservative Party leadership contest demands headlines and front pages to match – and Friday’s newspapers duly deliver.

The Daily Mail describes Thursday’s events – during which Michael Gove surprisingly announced he was standing for the Tory leadership, rather than supporting Boris Johnson’s campaign – as the party’s “most savage blood-letting since the fall of Thatcher”.

“On a day of extraordinary bitterness, Michael Gove knifed Boris Johnson in the back – ending the former London mayor’s dream of becoming prime minister,” it says.

“Mr Gove was accused of treachery and of presiding over an ‘orchestrated plot’ to destroy his fellow Brexiteer.”

The events were summed up by Metro as a “dramatic plot twist” straight out of popular TV drama “Game of Thrones”.

“The blond Brexiteer had spent the week at the Palace of Westminster readying his troops to go into battle with rival Theresa May.

“But just hours before he was due to stake his claim to the Conservative crown, he was knifed in the back by his trusted friend and ally in the Leave campaign, Michael Gove.”

The Daily Telegraph says Mr Johnson learned shortly after 9am that he was the “victim of the most spectacular political assassination in a generation” when the justice secretary publicly announced his intention to stand.

The paper’s Gordon Rayner writes: “With two hours to go until the launch of Mr Johnson’s leadership bid, Mr Gove, the man who was supposed to be making up the ‘dream ticket’ with him, had not so much stabbed him in the back as run through him with a pikestaff.

“Having been comprehensively stitched up by his running mate and several other ‘supporters’, [Mr Johnson] threw in the towel, his ambitions in ruins.” 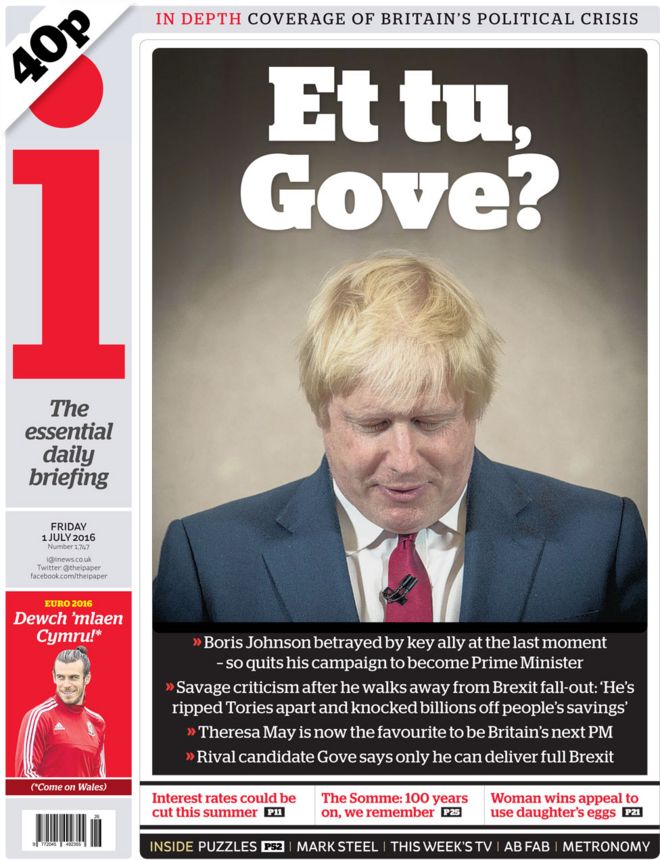 The Guardian says Mr Gove “ambushed” Mr Johnson with his surprise entry into the leadership race, complete with a statement in which he “brutally cast Johnson as lacking the qualities and character to lead”.

“From Brexit hero to zero in a week,” declares the Sun’s front page, followed by its main headline “Brexecuted”.

“Seething Boris Johnson supporters blasted Michael Gove over his ‘disgraceful betrayal’ – with one tweeting: ‘There is a very deep pit reserved in Hell for such as he’,” it adds.

ABOVE: The i draws on a line made famous by Shakespeare’s Julius Caesar with its headline “Et tu, Gove?”.

It says that despite suffering an “extraordinary act of political assassination”, Mr Johnson has not escaped criticism.

“Tory grandee” Michael Heseltine likened him to a general abandoning the battlefield at the first sign of trouble after “ripping the party apart”, the paper says.

This theme is picked up in the Daily Mirror, which headlines its coverage “Justice! The shaming of Boris, the man who betrayed Britain”.

Philip Collins, in the Times: “Yesterday was one of the great days in politics. Brutal, tragic, farcical and dizzying.

“If you didn’t find it fascinating and invigorating, then you don’t like politics.”

The Daily Mirror’s Kevin Maguire:”Boris Johnson waited years for the ball to come loose from the Tory scrum then was too cowardly to pick it up.

“The burly loudmouth bottled the biggest game of his life after a tackle by Gove the Geek… the truth is when push came to shove, the blond ambition chickened out, fearing defeat.”

Has Boris Johnson waved goodbye to his lifelong dream?

The i’s Andrew Grice: “The maxim that the front-runner never wins the Tory leadership election still stands; remarkably the favourite hasn’t won since the 1950s.

“Boris made a huge miscalculation: by heading up the Leave campaign, he drew a target on his own back.

“Incredibly, his enemies have scored a quick and unexpected bullseye instead of overtaking him in the leadership race.”

“Shambolic, heroic, flawed, magnificent…. a crowd-pleaser, a campaigner who electrified the public, had been seen off by the forces of greyness.

“The way he seduced the voters and made them laugh had secured him the envy of parliamentary colleagues. How they resent panache.” 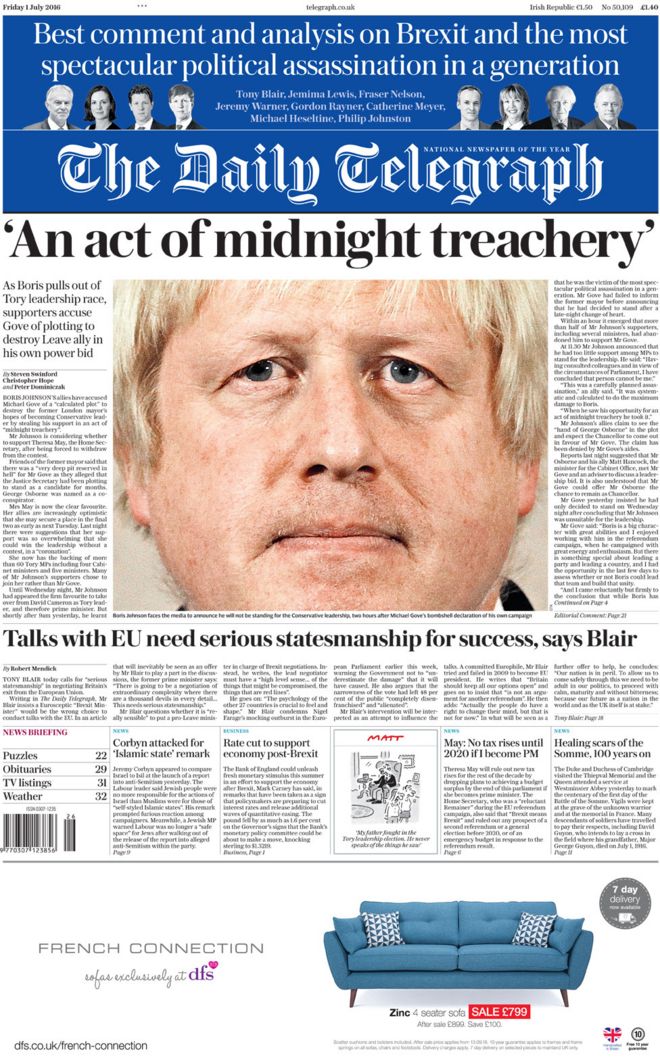 Sun editorial column: “Boris Johnson’s lifelong dream is over. But history will remember him – and the country will one day thank him – for leading Britain out of the EU.

Trevor Kavanagh, in the Sun: “Thank goodness Boris Johnson is not going to be our next prime minister after all.

“It might have been a thrilling ride, but Britain risked ending up like our hero, dangling foolishly on a political zip-wire.”

Macer Hall, of the Daily Express: “Crikey, jeepers and gadzooks, as the blond bombshell himself might say.

“Boris Johnson snuffed out his blazing ambitions with a moment of quite astounding political theatre.

“The master of the zip wire and the Boris bike may have just pulled off his most gob-smacking stunt yet.”

Theresa May entered the leadership race on Thursday, along with Liam Fox and Andrea Leadsom, with Stephen Crabb having already announced his bid.

The “extraordinary act of political assassination” of Boris Johnson has cleared Theresa May’s path to Downing Street, the i believes.

The Sun says she “stormed into pole position” in the race to be PM “after vowing to end Tory squabbles and pledging ‘Brexit means Brexit'”.

WITH excerpts from By Martin Tooth, BBC News

Who will be the next UK prime minister