President Buhari has commiserated with family of victims of attacks in Maiduguri, Borno State, assuring them that his administration will continually frustrate the devilish operations of Boko Haram, and bring it to an end.

President Buhari further condemned the “murderous and cowardly attack on innocent passengers by the Boko Haram terrorists near Maiduguri’’, adding: “this administration is ever determined to frustrate their goal to hold Nigeria to ransom’’. 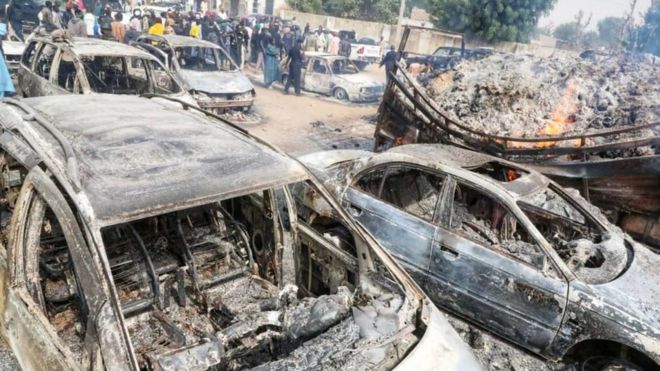 Suspected militant Islamists have killed at least 30 people and abducted women and children in a raid in north-eastern Nigeria, officials say.

Most of the victims were travellers who were burnt to death while sleeping in their vehicles during an overnight stop, officials added

The attack took place in Auno town on a major highway in Borno State.

Militant Islamist group Boko Haram and its offshoots have waged a brutal insurgency in Nigeria since 2009.

About 35,000 people have been killed, more than two million have been left homeless and hundreds have been abducted in the conflict.

Nigeria’s government has repeatedly said that the militants have been defeated, but attacks continue.

The assailants “killed not less than 30 people who are mostly motorists and destroyed 18 vehicles,” the governor’s office said in a statement.

It also confirmed the abduction of women and children, but did not give a number.

Residents said most of the victims were travelling to the state capital, Maiduguri, but were forced to sleep in Auno, about 25km (16 miles) away, because the military had shut the road leading into the city.

The military has not yet commented.

Maiduguri was once the headquarters of Boko Haram, but government forces eventually drove the group out of the city.

It is unclear whether the assault was carried out by Boko Haram or a breakaway faction linked to the Islamic State (IS) group.

President Buhari commiserates with family of victims of attacks in Maiduguri, Borno State, assuring them that his administration will continually frustrate the devilish operations of Boko Haram, and bring it to an end.
President Buhari condemns the “murderous and cowardly attack on innocent passengers by the Boko Haram terrorists near Maiduguri’’, adding: “this administration is ever determined to frustrate their goal to hold Nigeria to ransom’’.

“The commitment of this administration to protect the lives of Nigerians will not be derailed by the cowardly and indiscriminate violence against innocent people by Boko Haram terrorists,’’ he said, while reacting to recent attacks in Maiduguri.

The President Buhari, who also condoled with the government of the state, warns “that terrorists are clearly on a back foot and their days are numbered’’.

“As our armed forces continue to receive more hardware and intelligence to counter our current security challenges, the remnants of Boko Haram will ultimately be crushed. The peculiar challenges of asymmetric warfare notwithstanding, our armed forces are ever determined to defeat these enemies of humanity,’’ President Buhari said.

The attack in Auno is a reminder of the threat posed by militants, and the vulnerability of communities.

When President Muhammadu Buhari came to power in 2015, he pledged to defeat the insurgents.

Although his troops have made significant progress in weakening the militants, the recent spate of attacks on both military and civilian targets threatens the initial gains.

Many Nigerians have therefore been calling for an overhaul of the security forces and the replacement of military chiefs.

They hope that new generals at the helm of the security forces will reinvigorate the fight against the militants and make sure that the decade-long insurgency does not get any worse.