2015, with its many violent encounters of the terrorist kind, is behind us. President Muhammadu Buhari has declared that Boko Haram has been driven into hiding and is a shadow of its former self.

We are told by the Nigerian president that his army has “technically” defeated the Islamist militant group, that they have now been reduced to fighting with improvised “explosive devices and indoctrinating young guys to carry out suicide missions in churches and mosques”.

To those on the receiving end of such attacks, this does not seem much of a reduction of the insurgents’ activities but rather examples of their usual modus operandi.

And President Buhari’s definition will come as scant comfort to the people of the north-east, with many thousands still displaced from their homes and the frequent suicide attacks on markets by a group that has sworn allegiance to the so-called Islamic State (IS).

The figures are concerning – a six-year insurgency is said to have killed 17,000 and displaced more than 1.5 million people.

The Islamist insurgency has also spilt over into neighbouring Chad, Niger and Cameroon – with the United Nations Children’s Fund saying this has meant the closure of more than 2,000 schools and the disruption of over a million children’s schooling.

Come April 2016, it will be two years since the Chibok girls were kidnapped by Boko Haram and the hash tag #BringBackOurGirls will have long acquired the dusty feel of failure. Can Mr Buhari bring them back in the coming year? Will the Chibok girls be rescued in 2016?

2015 is the year Nigerians have seen, for example, that the professional political elite can indeed over-promise, and that honesty is a scarce virtue in politics.

“This government will do all it can to rescue them alive”—  President @MBuhari on May 29, 2015

“We are still waiting for a credible Boko Haram leadership that will tell us that. The question of Chibok girls is on our minds all the time. But we do not have any information on where they are. The Honest truth: we do not have.” – Buhari, 30 Dec 2015 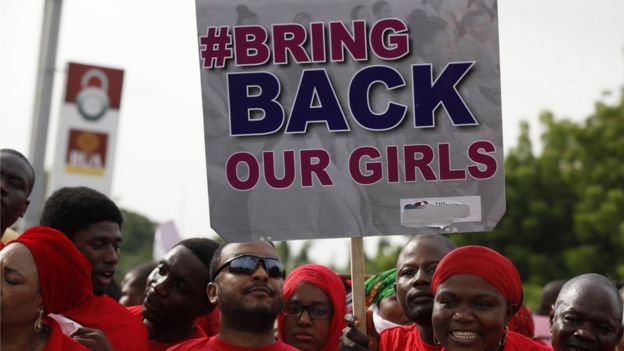 Oby Ezekwesili ‏@obyezeks  31 Dec 2015: Tragically, TODAY is 31st Dec. without OUR #ChibokGirls & shocking words by @MBuhari that FG has “NO CREDIBLE INTELLIGENCE.” Why, Nigeria??

Oby Ezekwesili ‏@obyezeks  30 Dec 2015: #AskBuhari @KayodeAkintemi  “No Intelligence on #ChibokGirls?” Did Ex-CDS Alex Badeh not leave a Handover Note on where they LAST SAW THEM??

Oby Ezekwesili ‏@obyezeks  30 Dec 2015: 625 DAYS. Still NO INTELLIGENCE on 219 Daughters of NIGERIA. Moms. Dads. Sisters. Brothers. WE who share a Bond of Humanity with them. How??

Oby Ezekwesili ‏@obyezeks : But we cannot claim to have defeated Boko Haram without rescuing Chibok girls & all other innocent persons held hostage by insurgents.

Reuben Abati @Abati 01 Jan 2016: In 2015, Nigerians confidently voted out a sitting government, and demonstrated that indeed, democracy is the triumph of the majority, right or wrong. It was the year when the political elite learnt a bitter lesson about humility.

What has prevailed is the power of the voter. The Nigerian voter ended the year 2015, fully aware of his or her power to determine the fate of politicians in office.

2015 was also in the year just ended that Nigerians witnessed for the first time, the rare spectacle of a sitting President organizing an election, which he and his party ended up losing in a jaw-dropping-to-the-floor-manner. President Goodluck Jonathan went a step further by conceding victory and pledging to support his successor. This may have been a positive development for democracy in Nigeria and Africa, but given the aftermath in the last seven months, this may never happen in Nigeria again or rather, for a very long time. President Jonathan chose to respect the people’s will and show leadership, statesmanship and patriotism, but today, some other students of power are working hard to revise the story, and the facts. The transition from a ruling party to the opposition is in theory, good for our democracy, but the cost to the former ruling party and its agents teach a different lesson. The use of such phrases as “stupid”, “naïve,” “inexperienced” to describe what ordinarily should be a positive development has shown a posteriori that the model that is likely to endure in the Nigerian political space, may not be that of sportsmanship, but the model, sadly, of “do or die” political opportunism. When this concept was introduced afresh into Nigeria’s political lexicon around 2003, we all raised our pens and mouths in protest.

But in retrospect, many Nigerians may consider that commonsensical aphorism, a nugget of political wisdom and pragmatism, and this may be the attitude that will govern future political behavior at the centre in Nigeria. When you hold power, control the institutions and you are in charge, it is better to avoid any jaw-breaking outcomes. I don’t for example, imagine the ruling APC, handing over power to an opposition party in 2019! The APC in seven months has demonstrated such pragmatism that has elevated the do or die principle to a guiding compass. Even the most apolitical among us, has learnt that even in a democracy, especially in Africa, you can only allow power to slip away at your own peril. You can moralize about this as much as you wish, but by 2015, Nigerians have seen clearly that politics is not always about good intentions.

They have seen, for example, that the professional political elite can indeed over-promise, and that honesty is a scarce virtue in politics. Above all, democracy is not a deus ex machina, a kind of magical process that resolves all problems; it certainly does not work like that in a developing country still grappling with issues of being and becoming. And so in the year 2015, Nigerians went from voting out a sitting government, to months of expectation, and ended the year on a note of disbelief: how there is so much difference between promise and delivery, governance and accountability, power and service, truth and falsehood and all the contradictions that the use and abuse of power by those we have elected to lead us, can possibly throw up. The effect is that the gap of distrust between the people and the political elite is further widened. In the year 2015, Nigerians experienced massive change in the political terrain, but by December 31, they were neither more confident nor better reassured about the future or their circumstances.

In 2015, Nigerians further saw on display, how change can be brought about in a multi-party democracy through alliances and coalitions. To dislodge the People’s Democratic Party, a determined opposition elite had to sink their differences, and unite under one mission, one vision and one umbrella. This multi-party coalition achieved its objective, and whereas the differences among the key players may have become evident, the strategic visioning that brought about change in 2015 is remarkable. The only caveat can be traced to the political vulnerability of the minority groups in Nigeria: with the coalition dominated and supported by the two major ethnic groups in Nigeria, with key politicians drawn from the third major ethnic group, the battle was obviously won and lost. The potency of a majorities-conspiracy in Nigeria reinforces politics as a game of numbers, but it further erodes whatever may have been achieved with the emergence of a President of South-South extraction, and has only further deepened feelings of alienation and marginalization. In securing victory in 2015, therefore, the majority may have sown the seeds of greater troubles to come.

Terrorists use beggars, hide IEDs in firewoods to cause mayhem