President Buhari Set To Return, Probably On His Way Back 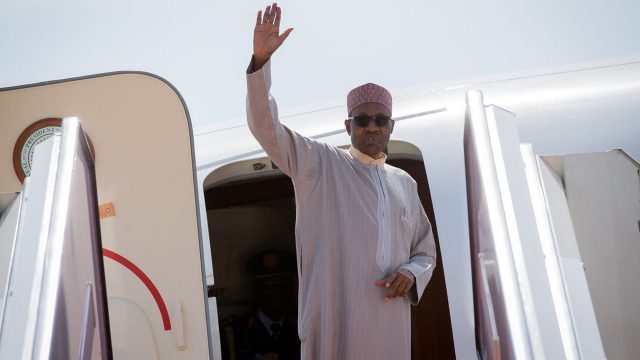 There are indications that ailing President Muhammadu Buhari might already be on his way back to Nigeria after a three-month sojourn to London.

Elombah.com learnt that the president might arrive Nigeria mid or late hours of Wednesday, August 2, 2017

According to a source, the president’s aircraft was initially billed to take off today barring any further changes in his itinerary.

Also, according to Daily Trust, some of the Aso Rock Staff have been put on alert for the President’s return.

President Buhari has spent almost three months outside the country on medical trip during which it was severally rumored that he has been highly incapacitated, or even dead, to lead the country anymore.

Presidential spokesman, Femi Adesina, had last Tuesday quoted Buhari to have told the president of Guinea, Alpha Conde that he would soon return to his duties.

The governor of Ekiti State, Mr Ayodele Fayose, however, has dispersed any story about Buhari’s return few weeks ago.

He claimed that he has 11 photographs of Buhari on life support and a vegetable, not any longer fit to steer the country of 180 million population.

Another unconfirmed source even claimed that he was secretly flown into the country in the late of Tuesday night.

It remains to be seen if the president will finally put to rest all insinuations as he returns to resume his office and duty.

George Moghalu: What Distinguishes Him From Other Actors

Wife: My Husband Wants To Kill Me With Sex, Uses Sex-Enhancing Drugs