For the CBN to refuse to devalue at this point in time is enough reason for most foreign investors to stay away from the market. “It seems like Emefiele’s just left it to Buhari,” Bloomberg Intelligence analyst Mark Bohlund said on Friday. “In the near term, monetary policy decisions look likely to be steered by the president, and according to policy prescriptions from another era.” – BLOOMBERG

“For Nigeria Buhari will not be a good economic manager. I know him well enough that he would inflexible, courageous and firm leader. If Nigeria would avoid a stubborn mismanagement of the economy…” – Former President Olusegun Obasanjo, 2011, My Watch

BLOOMBERG – Nigeria’s President Muhammadu Buhari erased any doubt about who is in charge of currency policy in Africa’s biggest economy — to the detriment of the central bank’s independence.

Buhari said that he won’t “kill the naira” by allowing it to be devalued and that a weaker currency will only result in higher inflation and hardship for the country’s poor- and middle-class. His comments to Nigerians living in Kenya on Wednesday came only a day after Governor Godwin Emefiele resisted pressure to depreciate the naira despite a plunge in oil prices that’s slashed revenue in Africa’s biggest crude producer.

“Definitely the independence of the Central Bank of Nigeria at the moment is undermined,” Robert Omotunde, an analyst at Afrinvest West Africa Ltd., which manages the equivalent of $500 million, said by phone from Lagos. “It further dampens confidence in the Nigerian market. The argument for devaluation is so overwhelming on all fronts.”

Emefiele this week stuck to foreign-exchange restrictions that have caused capital flight, curbed output and led to the naira dropping to a record low on the black market. The central bank has pegged the currency at 197-199 per dollar since March to stem its slide amid a rout in oil prices. 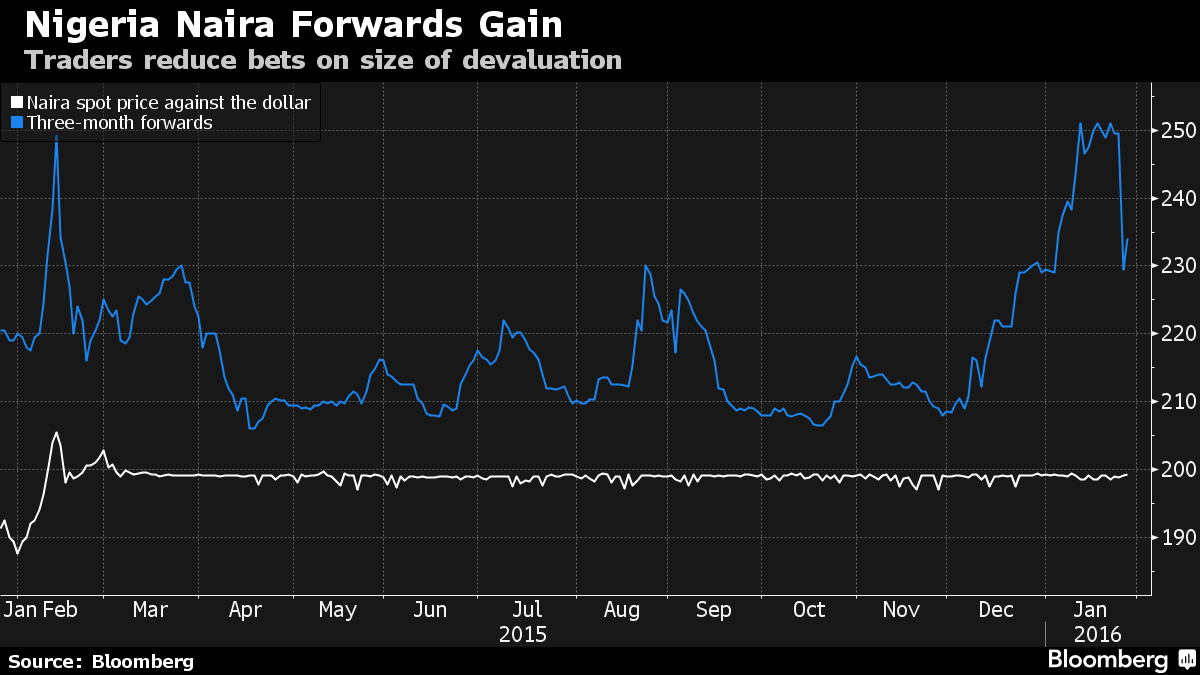 While Buhari’s “mind is open and he’s prepared to listen to other arguments,” the central bank “is not a sovereign entity” and accounts to the presidency and Parliament, Garba Shehu, a spokesman for the president, said by phone.

“The thinking of the president is informed by advice from the central bank,” Shehu said. “He meets with the governor at least once a week, sometimes more than once. The president is in the loop.”

The central bank will hold a meeting with foreign-exchange officers from commercial lenders on Feb. 4 at 9 a.m. in Lagos. The aim is to discuss developments in the currency market and “offer contributions in charting the direction for 2016,” it said in a statement dated Jan. 27 and published on its website on Friday.

Ibrahim Mu’azu, a spokesman in Abuja for the central bank, didn’t answer two calls to his mobile phone or immediately respond to a text message requesting comment. Finance Minister Kemi Adeosun said in an interview last week that the central bank was “completely independent.”

Buhari’s critics will have to work much harder to convince him that “ordinary Nigerians will gain anything” from a devaluation, Shehu said separately in a statement on Thursday. That’s despite the policy causing a shortage of foreign-exchange and being criticized by investors and businesses for exacerbating the economic slump.

The International Monetary Fund said growth was 3 percent in 2015, the slowest pace since 1999. A recession this year cannot be ruled out “should the status quo remain,” Andrea Masia, a Johannesburg-based analyst at Morgan Stanley, said in a research note on Friday.

“It seems like Emefiele’s just left it to Buhari,” Bloomberg Intelligence analyst Mark Bohlund said on Friday. “In the near term, monetary policy decisions look likely to be steered by the president, and according to policy prescriptions from another era.”

Three-month naira forwards weakened 0.2 percent to 227 per dollar as of 3:12 p.m. in Lagos. That’s pared the best weekly advance on record, with the contracts rallying about 10 percent as traders scaled back the size of a potential currency devaluation following Emefiele’s decision on Tuesday. The black market rate has plunged, falling to a record 307 this week.

The governor called for coordination of fiscal and monetary policies to help steer the economy away from oil dependence, while offering few hints on whether he is ready to ease controls to compensate for a decline in crude prices, which have almost halved since June to about $35 a barrel. Nigeria relies on oil for most exports and two-thirds of government revenue.

“One would have expected the CBN to take decisions that are in the interest of the country, not whether the president likes the decision or not,” Afrinvest’s Omotunde said. “For the CBN to refuse to devalue at this point in time is enough reason for most foreign investors to stay away from the market.’

Anambra: the status  of PDP Senators and House of Reps members