The militants say they want a more equal distribution of the oil wealth.

We understand their feelings. We are studying the instruments. We have to secure the environment, otherwise investment will not come. We will do our best for the country.”

This contrasts with a statement he was reported to have made in April when he was quoted as saying: “We will deal with the [oil militants] the way we dealt with Boko Haram.”

But one of the militant groups, the Niger Delta Avengers, has denied that there are talks.

On its website it says: “We are not aware of any peace talk.”

The vast wetlands of the Niger Delta region are home to Nigeria’s vast oil resources, but are once again at the centre of a security crisis.

The militants or the “boys” are back in the creeks, destroying pipelines, attacking oil installations, and kidnapping workers.

The violence has slashed Nigeria’s oil production by a third.

As we snake our way through the mangrove swamps in a speedboat we are entering a world where outsiders are no longer welcome.

With pipelines and a huge oil export terminal on the horizon, every so often we flash by a fishing community with its wooden huts clustered close to rickety, wooden pier.

The chaos here is dealing a serious blow to the Nigerian government who are dependent upon oil sales for most of its revenues. It has also helped push up the global oil price to almost $50 (£38) a barrel.

The renewed militancy was triggered late last year by the cash-strapped government’s decision to cancel lucrative security contracts and reduce the budget to pay former militants by 70% .

ABOVE PHOTO: Niger delta militants….Several militant groups in the Niger Delta have attacked oil facilities in the past

The payments were part of an amnesty programme agreed upon in 2009 that largely ended the previous bout of militancy, which had crippled the oil industry a decade ago.

As part of the agreement, tens of thousands of militants gave up their arms in return for a monthly stipend worth around $400 at the time and the opportunity to retrain as divers, welders and boat builders at colleges overseas.

Critics regarded the deal as little more than a “bribe for peace”.

Now with the payments drying up, many fighters with a grievance and a gun feel they have little to lose.

A group called the Niger Delta Avengers (NDA) says it is behind a series of attacks including one attack on a pipeline that shut down one of Nigeria’s main oil export terminals.

One militant leader, who says he fights alongside the NDA, agreed to meet us.

Commander Johnson Biboye, his pseudonym, told me his group were responsible for several recent attacks. He refused to give more details citing operational security.

He said his men had little choice but to return to militancy. 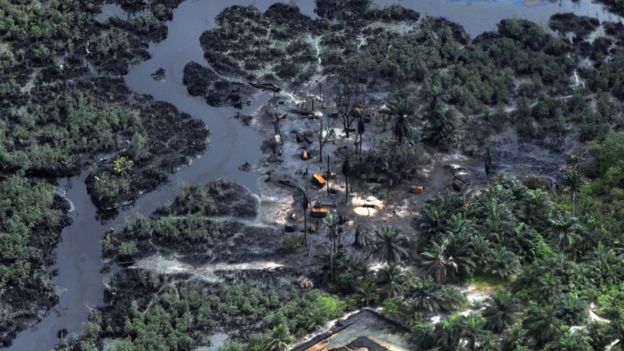 “You cannot sleep in the creeks and have the mosquitoes sucking your blood and say you’re happy,” he told me.

“But the government needs to know we’ve been taken for granted for several years, enough is enough.”

Mr Biboye says he has 300 fighters under his command. He denies he is holding the government “hostage” or that he leads a “terrorist” organisation.

“We’ve are demanding our rights,” he said.

“We have been slaves for many years. We are doing this so our communities get developed. We want to control the oil resources”.

He called on the government to negotiate sincerely with the militant groups and warned that if they did not the situation would only get “worse”.

Oil was first discovered in the Niger Delta in the 1950s. It should have been a blessing but many locals see it as a curse.

There have been widespread allegations of corruption, with accusations that politicians and local leaders siphon off cash that should be spent on building schools, hospitals and providing electricity.

Locals also complain that the jobs in the oil industry are frequently given to outsiders.

It is hard to ignore the painful irony that communities lying on top of some of the world’s richest oil deposits are mostly living in abject poverty. 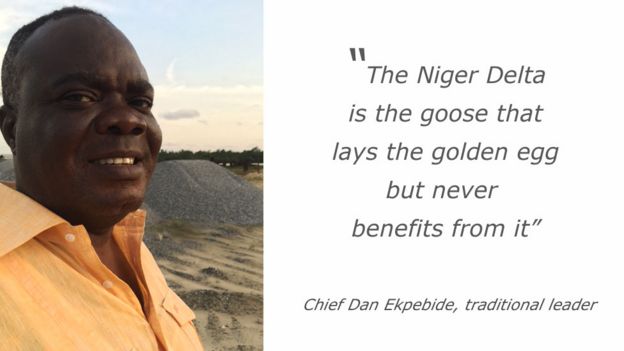 “The Niger Delta is the goose that lays the golden egg but never benefits from it,” Chief Dan Ekpebide told me as we wandered through the village of Kurutie.

We were there to see the temporary site of the Nigerian Maritime University – the first of its kind in the area.

There were a dozen buildings including a large lecture hall, student dormitories, and an enormous 12m diving tank to be used to train divers how to weld under water.

It was designed to give young people an opportunity and an alternative to a life of militancy.

But there are no staff or students and for Mr Ekpebide it is a symbol of broken government promises.

Temporary campus of the Maritime University 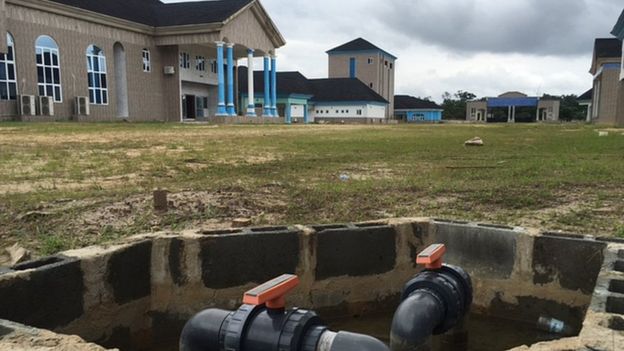 “We feel seriously neglected. It speaks volumes about how the federal government thinks about the people in Delta,” he said.

Like many in this part of the country he expresses anger towards the current administration of President Muhammadu Buhari.

The largely Christian south of Nigeria warned there could be trouble if President Buhari who is from the predominantly Muslim north of the country, beat Goodluck Jonathan during last year’s presidential elections. 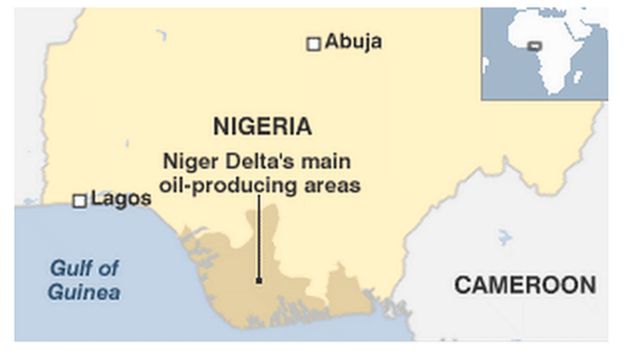 The former President was from the Niger Delta and spread his largesse around the region.

But now Mr Ekpemupolo also known by the alias “Tompolo” is on the run from the authorities accused of massive corruption.

Some Nigerians believe Tompolo is the mastermind behind the recent spate of attacks in the Delta. His supporters deny the accusation.

A short boat ride up the creek, Mr Ekpebide took me to the seat of the traditional Gbaramatu Kingdom, a prominent Ijaw group in the region.

The palace was bombarded during deadly clashes between the army and militants in 2009. 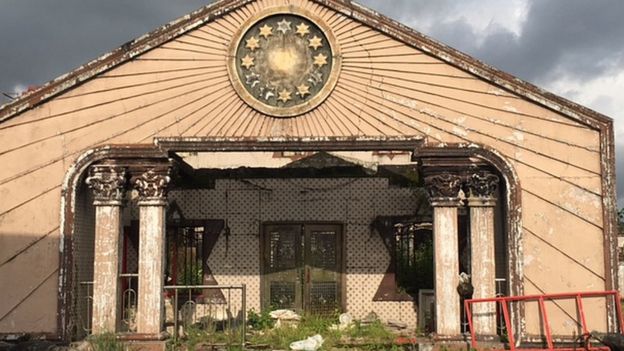 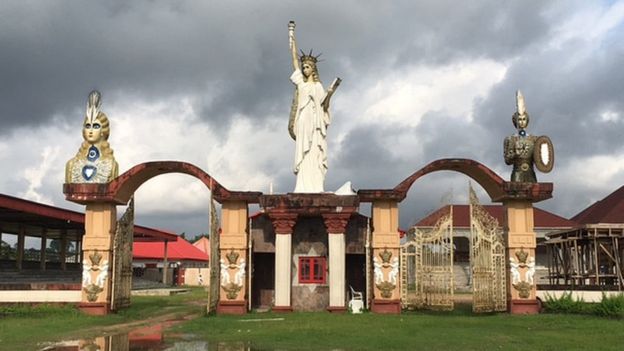 It now lies in ruins: The roofs were ripped off, windows smashed and statues toppled.

Shortly afterwards the amnesty was signed that has largely held until this year.

But Mr Ekpebide told me the palace will not be repaired.

“It is a reminder of what the government did to the people,” he said.

Few here are willing to forget the past and the anger felt in the Niger Delta will only divide the country further.

Nigeria: The incarnation of tyranny – by Arthur Nwankwo