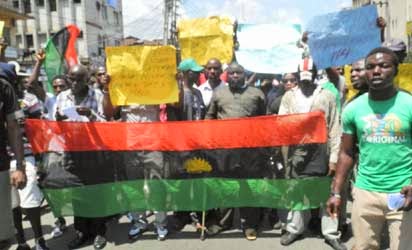 The August 30, killing of unarmed Pro-Biafra group, in Onitsha Head Bridge, by combined team of Navy and Police officials, recounted to TNIN by a Police officer

who insisted on anonymity for fear of reprisal, said that this killing is one of hundreds of similar cases.

[Photo: Members of the Movement of the Actualisation of the Sovereign State of Biafra (MASSOB) in procession]

According to him, too many government security officials have enjoyed impunity against Pro-Biafra groups for too long, including extortion, intimidation, killing of innocent people, and have become outlaws themselves.

And the evidence suggests that the killers are rarely punished, he said.

Some Media accounts cited the Flag Officer Commanding, Central Naval Command, Rear Admiral Stanley Ogoigbe, denying the alleged killing of members of the Indigenous People of Biafra (IPOB) by operatives of the command in Anambra State.

Ogoigbe, who spoke to reporters at the command’s headquarters on Saturday, said that the naval personnel only shot into the air to scare a large number of Pro-Biafra members, who were on a protest towards the Onitsha head bridge.

Reacting to Ogoigbe’s statement, one Kingsley Meadow said Mr. Ogoigbe statement does not add up, and he queried:

“The question is why will the Navy even bring out a gun on harmless civilian who were protesting peaceful and demonstrating their right on Biafra and you said your boys didn’t kill anybody so the people that died they killed themselves right?…”

Observers acknowledge that the country faces a real threat from extrajudicial executions by the Nigerian security officials.

But they warn the killings could end up exacerbating the very problem Nigerian Government is trying to stamp out by pushing disillusioned Nigerians into a countrywide revolt against Nigerian government.