Pull Down Fashola (PDF): The godfather is watching! 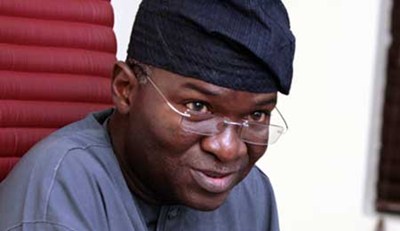 If Eko oni baje was a coinage of the Ahmed Bola Tinubu-led government in Lagos state, the saying was institutionalised and made popular when his successor,

Raji Babatunde Fashola [image above] took over. In essence the Fashola administration gave real meaning to Eko oni baje. Then, each time people shouted Eko oni baje, the message they sought to pass was that Lagos was in safe hands. There was always the wish that Lagosians will always vote right for Lagos remained in safe hands!

It is hardly surprising that, during the Fashola years, opposition politicians joined the Lagos is working chorus while some openly confessed that Fashola gave real meaning to Eko oni baje. Problem, however, is that Fashola’s problem started that day in 2008 when , to the eternal chagrin of Asiwaju Tinubu, he won the governorship ticket of the ACN or Action Congress of Nigeria party. If he felt slighted, Asiwaju never showed it and, in his naivety, Fashola thought he had been forgiven. Fashola’s first mistake: failing to realize that godfathers do not forgive political sins!

Whoever ordered incumbent Lagos state governor, Akinwumi Ambode, to go after Fashola must have spoken in unmistaken even if guttural voice of godfathers. And, in just about one hundred days in office, Ambode must have succeeded beyond the imagination of whoever prepared the script he is acting out by shredding, even if momentarily, whatever reputation Fashola built for himself. Ambode has been so dexterous in his pdf (pull down Fashola) assignment to the amusement of opposition politicians who sneer that his most visible achievement thus far has been to discredit Fashola!

All Ambode had to do was to flash a controversial contract awarded by Fashola for the upgrade of a website. Misapplication of public funds, for whatever reasons, is unacceptable and, had Ambode turned the blind eye to the act, chances are very few people would have believed Fashola was capable of spending public funds to the tune of N78million to upgrade a private website. Under normal circumstances, Ambode would have turned the blind eye. But, these are abnormal times which Fashola imposed the moment he defied the godfather to pick the governorship ticket.

A second mark of Fashola’s naivety was his determination to shine like the moon among stars when he executed the office of governor of Lagos state. Politicians, especially the godfathers, cringe at the idea of being outshone by whoever succeeded them. It was in pursuit of this unwritten political rule that former president, Olusegun Obasanjo, paired a dour and patently incompetent Goodluck Jonathan with a terminally ill Umar Musa Yar’adua in 2007. If Fashola was not a political novice, he needed not have prayed publicly for a successor who will exceed his own performance.

What ‘finished’ Fashola was the unease he caused when Nigerians mounted a campaign for him to be called for national duty. He had spent every minute of the eight years he ruled to drive Lagos and Nigerians felt he will not fail to perform on the national stage. In fact, Fashola’s profile rose to the extent that many were prepared to endorse a Muslim-Muslim ticket had he been picked to run with then candidate Buhari. This should be an enduring tribute to a man whose name remains high on the fast-receding list of upright Nigerians and who many thought the Buhari/Osinbajo administration could do business with.

But no two godfathers operate in one place at one time. After performing excellently as governor, there is the tendency that Fashola will replicate his Eko oni baje magic in Lagos and eventually excel as federal cabinet member. This had the potential of automatically conferring the status of godfather, the second in the south west, on Fashola. Even Fashola, despite his legendary modesty and humility, would not subscribe to such inconvenient arrangement if he was the subsisting political godfather.

Fashola should not even try to convince anybody that playing godfather is not be on his shopping list because no one will believe him. This is because the people behind his travails are the same people who feel uncomfortable with his rising profile. He simply eased the job of those who want to cut him to size by his controversial N78 million contract. As things stand, it is almost certain Fashola will not serve in the incoming cabinet and may not play any visible role in the government at the centre. Should that bog him?

No! After all, he has contributed greatly to make Lagos work, a fact residents and visitors to the state readily attest to. Under Fashola, the chaos which was one of the reasons cited for the relocation of the seat of government to Abuja, ebbed. He started a revolution to ease traffic gridlock on Lagos roads that should yield dividends if followed through by successive governments. In most part of today’s Lagos, people now use footbridges without having to sidetrack wares displayed by street hawkers or have their dress pulled by desperate beggars. Gradually, reefer-reeking Area Boys and Girls are being taken off the streets.

What Fashola did in Lagos is an attestation of what a determined and focused leadership is capable of doing. One great lesson democracy teaches, but unfortunately lost on politicians, is that peaceful change comes through the ballot. The alternative, when the ballot is banished, is chaos. The main reason Lagos is working is that residents are clearheaded enough to differentiate between serious leaders and pretenders. It was in the spirit of voting for clearheaded leaders that Lagosians lined behind Ambode last April.

Governor Ambode may feel compelled to do the unthinkable in his quest to satisfy some big masquerades. He may continue to hunt and haunt his predecessor instead of improving on what he inherited. Of course, he has done enough to be in the good book of the godfather and should continue to do everything and anything to remain there. Let him derive joy in frustrating Fashola by constantly placing him under the telescope. But, he will do well to remember why Lagosians chose him ahead of other.

Of course, Governor Ambode should ask questions and there should be no cover-ups. He should not waste time in retrieving every kobo Fashola cornered. But, in doing this, His Excellency should realize that he was not elected to fight the battle of a vindictive godfather!