Putin heads for UN showdown with Obama over Syria 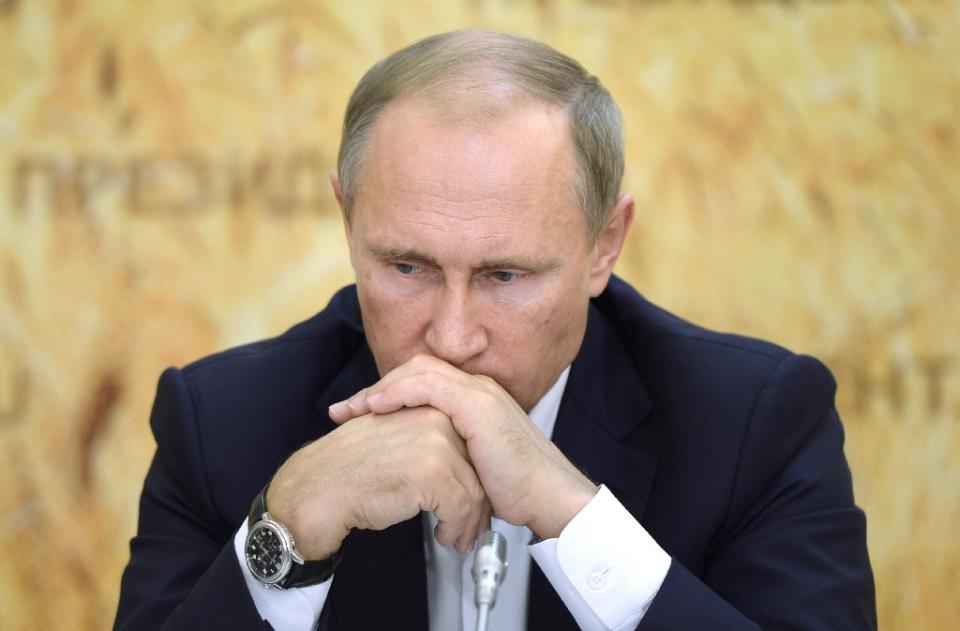 counterpart Barack Obama at the United Nations as the Kremlin leader pushes for a new coalition against the Islamic State group.

Putin [pictured above] and Obama are due to make competing speeches before the UN General Assembly in New York, and will come face-to-face for their first official meeting in over two years at a time of high tension.

In the run-up to the showdown, Putin — isolated by the West over the crisis in Ukraine — has dramatically thrust himself back into the spotlight with a lightning push on the 4.5-year conflict in Syria.

Moscow has put Washington on the back foot by dispatching troops and aircraft to the war-torn country and pushing reluctant world leaders to admit its long-standing ally Bashar al-Assad could cling to power.

The Kremlin strongman called in an interview ahead of the UN summit for “a common platform for collective action” against Islamic State jihadists that would supersede a US-led coalition and involve Assad’s forces.

On the ground, Russia seems to have already started putting the pieces together by agreeing with Iraq, Syria and Iran that their officers will work together in Baghdad to share intelligence on IS.

Russian Foreign Minister Sergei Lavrov said that despite the sharp disagreements, he saw that Moscow and Washington shared a “desire to work together” on Syria after a meeting with his American counterpart John Kerry on Sunday.

But the US has expressed deep concern over Russia’s maneuvering in Syria and insists Obama will not let Putin off the hook over Ukraine after he shattered ties with the West by seizing the Crimea peninsula and allegedly fueling a separatist conflict.

“We’re just at the beginning of trying to understand what the Russians’ intentions are in Syria, in Iraq, and to try to see if there are mutually beneficial ways forward here,” a senior State Department official said.

“We’ve got a long way to go in that conversation.”

Washington has demanded that Syrian strongman Bashar al-Assad step down, but Putin’s rival alliance with Shiite-led states will instead shore up the beleaguered government in Damascus.

Western powers say Assad’s military is responsible for the vast majority of the 240,000 deaths in the war, but with their response to IS in disarray, they have let the Syrian president’s backers present him as the only option.

“I think today everyone has accepted that President Assad must remain so that we can combat the terrorists,” Iranian President Hassan Rouhani, another key ally of Assad, told CNN on Sunday.

While the duel between Putin and Obama looks set to hog the limelight, there are a string of other eye-catching subplots on what will be a frantic day of diplomacy in New York.

Rouhani will take to the podium for the first time since Tehran edged in from the cold with the signing of a key deal with world powers over its nuclear program in July that will see sanctions eased.

In an olive branch to his US hosts ahead of the address, Rouhani said that Iran was ready to free three Americans from its prisons in a prisoner swap for its citizens held over sanction violations.

France’s Francois Hollande will also address world leaders a day after his fighter jets carried out their first strikes against IS jihadists in Syria.

In his first UN address, China’s Xi Jinping will talk after a tour of the US that saw Washington and Beijing struggle to shake off mutual suspicions by trying to curb fears of cyber spying.