Putin to UN: America is destroying the world, and only we can stop it 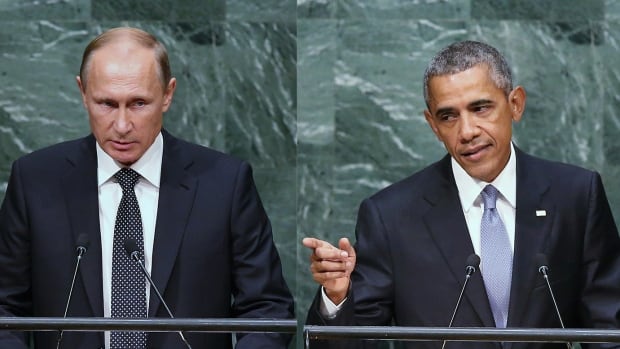 Both Barack Obama and Vladimir Putin frequently claim to reject outdated Cold War thinking, but it’s hard to avoid the comparison when both leaders devoted their addresses to the U.N. General Assembly on Monday morning to rejecting the other’s worldview.

Speaking shortly after Obama dismissed Russia’s view that Syria’s Bashar al-Assad can be a partner in fighting ISIS, Putin, making his first address to the General Assembly in a decade, blamed foreign—read: U.S.—interference for helping the spread of extremism in the Middle East.

“Rather than bringing about reforms, an aggressive foreign interference has resulted in the brazen destruction of institutions,” he said.

Addressing “those who’ve caused the situation,” Putin said he’s temped to ask, “Do you realize now what you’ve done?” (Putin never referred to the U.S. specifically, only to an unnamed Voldemort-like malevolent presence doing terrible things in the world.)

Attacking the policies of two U.S. presidents in one fell swoop, Putin noted that the ranks of ISIS include former Iraqi service members who were decommissioned after the 2003 invasion, as well as the “ranks of so-called moderate opposition. First they are armed and trained, and then they defect to the Islamic State.”

Saying “we cannot allow these criminals who have already tasted blood to return home and continue their evil doings,” Putin argued that ISIS’s growth poses a threat to all nations, including Russia, and called for the formation of an international partnership “similar to the anti-Hitler coalition” in order to fight them.

(That would be a coalition with several brutal dictators competing for the role of Stalin.)

This wasn’t the only historical analogy in Putin’s remarks. He also compared western attempts to spread democracy in the Middle East to Soviet-era experiments in spreading Communism around the globe, suggesting they were destined for similar failure. “No one has to conform to a single development model that someone has recognized as the only right one,” he said.

Moments after Obama rejected the notion of a “conspiracy of U.S.-controlled NGOs” to overthrow governments around the world, Putin described the 2014 overthrow of Ukraine’s government as a “military coup” that was “orchestrated from outside.”

Putin also defended Russia’s use of its veto at the U.N. Security Council, which U.S. officials say undermines the authority of the body by shielding violators of international law from criticism and sanctions.

Russia’s response is that the U.S. is simply irritated by a check on its unrestrained power in international affairs.

Putin rejected criticism of Russia’s veto as “a dangerous attempt to “undermine the legitimacy of the United Nations” by a power who “thought they knew better and didn’t have to reckon with the UN.”

Wonder who he could be talking about.

Joshua Keating writes via THE SLATE