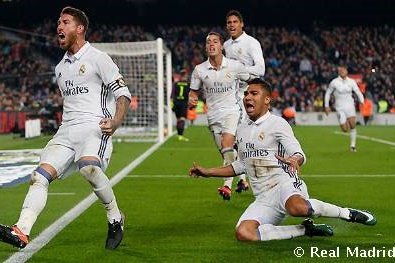 Sergio Ramos has done it again for Real Madrid, being a true captain and the saviour of his team.

With Barcelona seconds from a hard-fought Clasico win he rose to head in a Luka Modric free-kick on 90 minutes, earning Madrid a crucial point at Camp Nou.

He evoked memories of the way he brought Madrid back from the brink in the Champions League final against Atletico Madrid.

The draw  in the bad tempered El-Clasico was good enough for the Spanish league leaders as they stay six points clear at the top with an unbeaten run that now stretches 33 games.

Barca were moments away from reducing the gap to three points when Real captain Ramos pounced to make it 33 games without defeat for his side.

Real are approaching the winter break in the driving seat, Barca having gone three matches without a league win.

The hosts started slowly and managed only one attempt on goal — a Lionel Messi free-kick was comfortably gathered by Keylor Navis — in a scrappy first half.

In contrast, Ronaldo had three attempts in the opening 45 minutes as Luka Modric dominated for Real in midfield.

While far from being at their fluid best, Barca were better after the break.

They went in front when Raphael Varane conceded a free-kick just outside his area and Neymar nodded home from close range.

Messi missed a great chance to double the lead after a lovely pass from substitute Andres Iniesta, on his return from injury, before Ramos had the final say.

After the game Real Madrid’s hero Sergio Ramos dedicated his goal to the families of those who died in the Chapecoense plane crash.

“This point and this gol are for the families of Chapecoense.#ForcaChape”, he tweeted.

Barcelona striker Luis Suarez: “I think we were the better side and we did everything possible. Now we have to be strong and keep on.”