Recession is a by-product of corruption – EFCC boss Magu 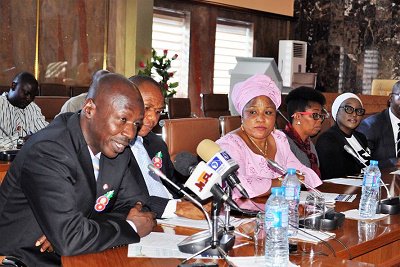 Acting Chairman of the Economic and Financial Crimes Commission, EFCC, Ibrahim Magu has said that there is a nexus between corruption and economic recession.

Magu who was speaking on Thursday, December 1, 2016, when he visited the Naval Headquarters in Abuja on a courtesy call said the recession prevalent in Nigeria today was as a fall out of the corruptive tendencies of our leaders.

According to him, except Nigerians resolve collectively to abhor corruption in all forms, there will be no future for the youths.

He also said that it is disturbing that federal, State and Local Government allocations are persistently being misappropriated.

“If 50 percent of the allocations at the three tiers of governments are judiciously put to use, we would not be where we are in terms of underdevelopment and infrastructural decay”, he explained.

The EFCC Boss said that his visit to the Naval headquarters was in furtherance of the inter-agency collaboration between the EFCC and other government agencies.

“EFCC alone cannot fight corruption; we need all hands to be on deck.

“We have come to appreciate you for the robust relationship that exists between the EFCC and the Nigerian Navy, and we want to leverage on that to stem corruption in Nigeria”, Magu said.

He appealed to the Chief of Naval Staff, Vice Admiral Ibok-Ete Ekwe Ibas to help mobilize women in Uniform, especially in the Nigerian Navy, to come out on December 7, 2016, to be part of the flag off of the Women Against Corruption programme by the wife of the President, Aisha Buhari.

The Chief of Naval Staff, in his response agreed with the EFCC Chairman when he said “corruption fuels insecurity and responsible for lack of development.

He however advised the EFCC chairman that more attention should also be paid to corruption in the private sector.

He also said that after the flag off of the Women Against Corruption programme, “efforts should be made to look seriously in the direction of the children as there is the need to catch them young”.

“In whatever you are doing, be rest assured that we would be there to support you in kill corruption in Nigeria.

“Because like the President said, if we don’t kill corruption, corruption will kill us”.

Oliver Fejiro, a journalist of many lies against Delta Govt