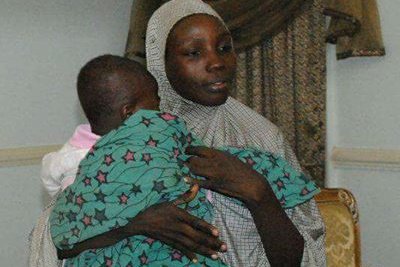 The Chibok school girl rescued on Saturday has revealed that her Boko Haram “husband” has been killed while in battle with Nigerian military forces.

The girl was rescued by troops of 121 Battalion of the Nigerian Army, deployed at Pulka, Gwoza Local Government Area, Borno State, for Operation LAFIYA DOLE on Saturday.

The BringBackOurGirls campaign group identified the latest Chibok girl, Maryam Ali Maiyanga, found by the military as a school prefect.

“She is from Askira Uba and was abducted along with her twin, Halima Ali (Number 197), who is yet to return,” a statement on Saturday by the spokesperson of the group, Sesugh Akume, read.

The group welcomed the news of the return of the abducted girl taken with some other girls from their schools’ dormitory in Chibok community in Borno State on April 14, 2014.

It said that preliminary investigations on their part, showed that Maryam was the number 198 on their list of the over 200 abducted girls.

“We applaud the Federal Government under President Muhammadu Buhari, the military and other security formations working day and night to rout the terrorists and rescue all Nigerians in captivity.

“The news of the death of the Commanding Officer of the 272 Task Force Tank Battalion, Lieutenant Colonel Muhammed Abu Ali, a highly-rated, young officer and four other members of his team, in a separate incident at Mallam Fatori, is unfortunate and saddening.

“We send our heartfelt condolences especially to their families, and the Nigerian military,” the statement further read.

The group also said it would update the public with more details in relation to the girl as necessary.

The Army, in statement, had said that the girl was identified while screening some escapees from Boko Haram terrorists’ hideout in Sambisa forest.

According to the statement, the escapee is one of the abducted Government Secondary School Chibok girls, named Maryam Ali Maiyanga among them.

The Army said, “She was discovered to be carrying a 10-month-old son, named Ali. He has been taken to the unit’s medical facility for proper medical checkup.

When asked about the whereabouts of the father of her 10-month-old baby, she said that he was killed in gun duel with military men.

Buhari’s anti-corruption war: Who is afraid of Magu?

Call To Sack Amaechi, Onu By PDP Is Mischievous – APC