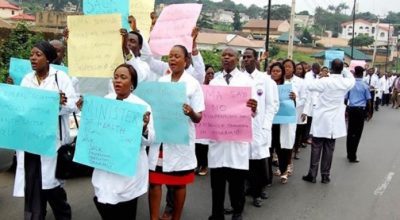 National President of the association, Dr. John Onyebueze who announced the suspension in a statement in the early hours of Thursday said doctors decided to suspend the strike after considering efforts made by government in addressing their demands.

He therefore directed all doctors to go back to work with effect from 8.00am on Friday. The one paragraph statement reads:

“After due consideration of the efforts by Government and progress made in addressing the items on the notice of our ultimatum, and strike, as well as implementing the contents of the re-negotiated MTS, NARD resolved to suspend her 10 days strike, and to reassess situation in two weeks at our AGM in Abuja.

The government and the doctors had signed a memorandum of terms of settlement which they were supposed to have been reviewed last Friday and suspend the strike after receiving alert for the payment of their salary shortfall.

The doctors however failed to call off their strike in line with terms of settlement signed with the Federal Government.

Days after the supposed meeting to call off the strike, the doctors continued to keep silent about the industrial action, fueling speculations that they may have rejected the terms of settlement.

The strike was called to force government to meet doctors demands and pay their salary short fall. Medical services in government hospitals had been disrupted nationwide with patients not attended to.

DEMANDS Among other demands, the doctors are protesting the sack of some of their colleagues, non-payment of “skipping’’ entitlement, non-inclusion in the IPPIS platform and non-payment of their salary arrears.

The federal government at the meeting had agreed to terms of settlement with the association, assuring that it will pay the arrears and commence the inclusion of NARD members in the IPPIS platform.

In an earlier interview with NAN, Dr Arikawe Adeolu, a member of the National Executive Council of NARD, said the association was waiting on the federal government to redeem its pledge before the strike could be called off.

Adeolu said that more than half of members of the association were yet to receive their arrears, claiming that government is also yet to meet its other demands in the terms of settlement.

He said that the association would therefore hold a meeting to assess the response of government to its demands.

“We were supposed to hold a meeting on Sept. 8 but it didn’t hold because the essence of the meeting was defeated.

“We thought that government would have paid by then but we got nothing so the meeting has been postponed to September 12; it will be a closed door meeting to carry out an appraisal of events so far,’’ he said.