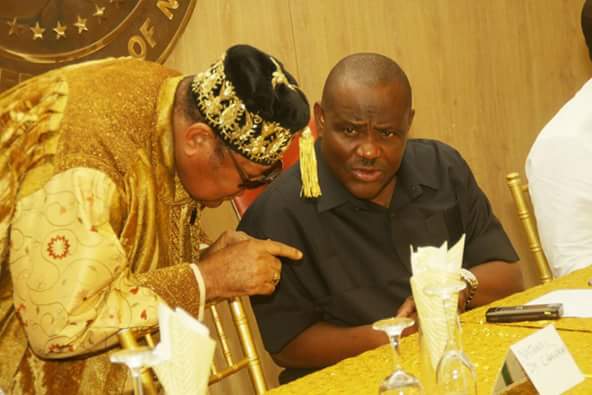 With Governor Nyesom Wike becoming increasingly restless and desperate to investigate, try and jail alleged printers of fake INEC documents all by himself, the Rivers state governor has been told to resign and join the ongoing recruitment of policemen by the Police Service Commission (PSC) where he can put his ‘expertise’ into use.

One of the All Progressives Congress (APC) leaders in the state and its 2015 governorship candidate, Dr Dakuku Peterside gave the admonition following fresh allegations by Wike against the Nigeria Police, where the governor is claiming that the AIG in charge of Zone 6 was allegedly planning to bury the matter by asking that it be transferred to him.

He wondered how the Rivers state governor has suddenly turned to Commissioner of Police, complainant, prosecutor, judge and controller of prisons, who determines how a supposedly criminal matter should be dealt with.

“Wike should be reminded that Rivers people and Nigerians are no fools to be treated to a circus show where a state governor is the complainant, arresting officer and prosecutor and wanting to assume the responsibility of police commissioner.

“He will do well to resign as governor and join the ongoing recruitment into police force. Enough is enough with the antics of an irresponsible governor. We have never had it so bad in the state,” he stressed.

He reminded Nigerians of the antics of the PDP in the build-up to the 2015 general elections, where the APC was accused of cloning PVCs and plotting to hack into INEC database. However, it eventually proved to be baseless.

He berated Governor Wike for shopping for all manner of pictures over the internet, all in an attempt to rope him into their evil plot and drag his hard-earned reputation into the mud.

Dakuku, who is also the Director General of NIMASA, accused the state governor of running a government of deceit where everything, including the state budget is shrouded in secrecy.

“Never have we had such a deceitful government in the history of the state. As at today, nobody has a copy of the state budget for 2016, not even members of the House of Assembly. Not too long ago, two of his commissioners appeared on a live radio programme and were asked by Rivers people where the state budget is, they admitted not knowing the budget of their respective ministries. Is that not a shame?

“Teachers, pensioners, civil servants, doctors, nurses among others are being owed several months salary, yet the deceitful government continues to claim no worker is being owed. Nobody in Rivers state knows the value of projects awarded by Wike. He just wakes up and awards projects the way he likes.’

Dakuku stated that Rivers people were increasingly getting tired of the antics of the governor, who he says cries the most whenever elections are around the corner, while also threatening the lives of INEC officials, ad hoc staff and security agents.

He assured that the APC will win any free, fair and credible election in the state, as according to him, the party is well grounded and has the candidates who are widely accepted and responsible.

The former Reps member called on APC faithful in the state not to be deterred by the latest antics of the PDP, saying in the end, the will of people will triumph in favour of his party.

Are Nigerians Over-Relying On The Government?