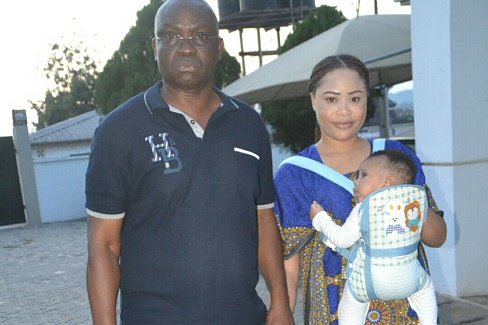 Governor Fayose scuttled the move by EFCC against the wife of Mr. Fani Kayode

It was gathered that ‎ Mr. Fani-Kayode’s wife attempted to withdraw money in Access Bank from an account which had been flagged by the commission long ago.

As with any such flagged account, anyone who tries to withdraw money from such account will be invited for questioning by the commission.

Upon arrival of Fani-Kayode’s wife to withdraw money from the flagged account, the bank quickly informed the commission.‎

However, in ‎ a message circulated by Mr. Fani-Kayode, he claimed that his wife travelled to Ado-Ekiti to see Governor Ayodele Fayose.

“They were on their way out of town when they went to Access Bank in Ado Ekiti to get some money.

“When they got there, my 8 month old son Aragorn and wife Precious Chikwendu were illegally detained, brutalised and put under arrest on the orders of the EFCC at a bank in Ado Ekiti.”

He said his wife did no wrong and had never been invited by the anti-corruption agency.

“Had it not been for the intervention of Governor Ayo Fayose they would have been taken them away and subjected them to all manner of harm and indignities simply because she is married to me,” he said.