Taking to his Twitter handle @ChidiOdinkalu, Prof. Odinkalu posted a document showing a post by Empero Gabriel Ogbonna narrating how Governor Ikpeazu “mortgaged himself to his predecessor in ritual oathing”.

This is the reason Abia State Gov, @OkezieIkpeazu wants to have lawyer, @EmperorOgbonna wasted – the allegation that the governor mortgaged himself to his predecessor in ritual oathing. If he succeeds in wasting the young man, then he can avoid the facts?

The document supposedly written by Empero Gabriel Ogbonna on March 20, indicated that Okezie Ikpeazu signed a document imposed by a “Igbo governor” who is reportedly his predecessor.

In the document, he, Governor Ikpeazu, undertook to surrender his state to his sponsor, a former governor of the state, and his son.

In case of failure to do just that, he was compelled to take an oath that the spirits they worship should deal with him.

According to Ogbonna, the document, which was signed by the current governor, fell into the hand of security operatives when the home of the former governor and his son was raided.

Since, according to Ogbonna, he saw the document on a news forum, he has been under arrest and detention pending when he divulges all he knows about the document.

See contents of the post by Empero Gabriel Ogbonna as captured in a document:

Since yesterday, a document has been circulating online. I even saw the document on a news forum.

The document purports to be a document signed by an Igbo governor wherein he undertook to surrender his state to his sponsor, a former governor of the state, and his son. The document was signed by the current governor.

He took an oath that the spirits they worship should deal with him if he fails in his undertaking. 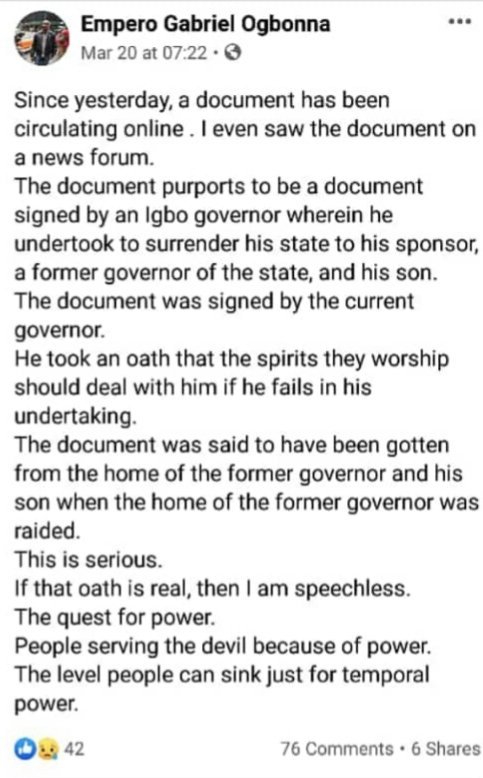 If that oath Is real, then I am speechless. The quest for power.

People serving the devil because of power. The level people can sink just for temporal power.