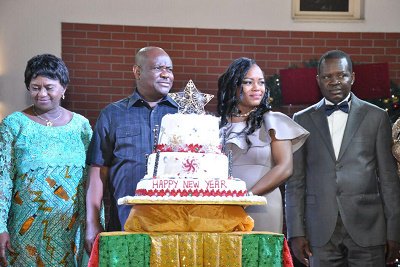 Rivers State Governor, Nyesom Ezenwo Wike has assured the people of the  state that his administration will embark on extensive  empowerment programmes in 2017.

This was contained in government house press release by the Special Assistant to the Rivers State Governor, Electronic Media, Simeon Nwakaudu.

Governor Wike also stated that the state ‘s share of the Paris and London Clubs Deduction Refund would  be applied to aggressive projects execution  in 2017 since the state government has already  settled  salaries and pensions.

He said: “This year will be a year of the  empowerment of our people.  While we are doing projects, we will be doing stomach infrastructure.

“Our  stomach infrastructure  this year  will go round the people. We will transform  the state in all ratifications “.

The governor said: “We will increase the tempo of projects execution  in January  to the level that our people  will be  amazed.

“Work starts on January 3, 2017 . We will release  more funds for the  execution  of the Ogoni Andoni-Opobo-Nkoro Unity Road. Sakpenwa-Bori road, Buguma Internal Roads and several  road projects  will be executed.

“Between this year and early 2018 we will deliver on all our road projects.  Within this period, Rivers State  will witness  total  transformation “.

While commending  the  leaders of Rivers State for their support and loyalty , he assured that his administration will continue to invest in the maintenance of security.

The governor  reiterated  that Rivers people  deserve an award from INEC  for standing  up in defence of democracy  during  the rerun legislative elections.

He said that the state government will stand by the families  of  those who died  while defending  the integrity of Rivers State.

“Nobody will intimidate or blackmail  me. No one person can own Rivers State “, he said.

He noted that Rivers State will roll out the drums in 2017 to celebrate  the  State Golden Jubilee.

In his remarks, Former Transport Minister, Dr Abiye Sekibo said that Governor Wike’s style of governance  must be  applauded  as it has brought development and stability  to the state.

He said: “This government  has brought  an inclusiveness that has never been  seen for a long time  in the state. “

In a welcome address, Head of Service of Rivers State, Rufus Godwins said the leader of the state has revived the  state’s economy  when the entire  country  is in a recess.

Also speaking, Solicitor General of the State, Mrs Florence Fiberesima and Mr Ken Chikere, Member of the House of Representatives  noted that the state has witnessed tremendous  growth under the leadership of Governor Wike.

Members  of the National and State Assemblies also  attended the event.

The New Year Cake was cut by the State Governor, supported  by his wife, Justice Eberechi Suzzette Nyesom-Wike and leaders of the state.