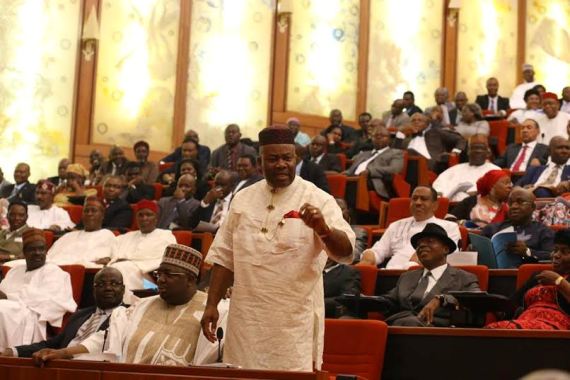 Some Senators are vehemently opposing the suggestions, for the sale of the nation’s assets as a means of surviving the current economic recession.

The Senators, who spoke on the floor of the Red Chamber during the debate on the state of the economy, said it would be very wrong to sell any assets.

This follows the suggestion by the business mogul Aliko Dangote that national assets be sold.

The Senate President also towed the same line of suggestion, on his welcome address to the Senate.

Other senators, however, have warned against the recommendation, calling for a constitutional amendment to stop the complete sharing of revenues accruable to the Federation Account.

Deputy President of the Senate Senator Ike Ekweremadu cautioned that the sale of assets was not the way out of the recession, maintaining that no country resorts to selling its national assets while in crisis.

“UAE does not even allow you close to the oil wells, let alone selling them.

“A country like Saudi Arabia their budget each year is run by investments from their oil revenue.

“Other countries are investing and with all the investments we have, I am sure it will not be fair to the next generation if we sell off our assets.

“If we must sell we have to sell the non-performing assets so that people can turn them around and create employment,” he said.

He said that the recession had buttressed the importance of saving, adding that there was a need to amend the sharing formula between federal and states to encourage saving.

“We need to amend section 162 especially from 3, 4, 5, 6 where money in the federation account is enjoined to be shared among the other levels of government,” he said.

Senator George Akume in his contribution, stressed on the need to refrain from the call for the sale of the nation’s assets, but said the focus should be on recovering stolen funds.

He said a lot of money had been reported to have been stolen from the nation, recalling that former Central Bank of Nigeria (CBN) Governor Charles Soludo had pointed to a stolen $60 billion.

Igboho not under any immigration-related investigation in Benin…

Akume added that another former Governor of the CBN Sanusi Lamido Sanusi also pointed to another $20 billion that was stolen and could be recovered.

“From these and from monies going through other sources, we should at least be able to recoup over $50 billion.

If we succeed in doing this, do we still have to sell our assets as is being canvassed?

“There is a buyer’s market and there is a seller’s market, if we want to dispose of our oil assets at this time when the prices of oil had crashed, precisely how much are we going to realize?

“We are making a mistake here.

“What we are intending to do is to very unpatriotically ensure that those who are within the bracket of the stolen dollars will still come to buy.

“I believe that this is not the time to strip these assets.

“Fortunately the CBN governor made a very powerful statement that the worst days of the recession are over and therefore we have to look elsewhere and not sell our assets. scaune chisinau

“We should rather focus on industrialisation through agriculture and try to revamp this economy. I am worried because people who are telling us to sell these assets are people who have huge pockets.

“Our assets must remain for us. Even Saudi Arabia didn’t sell part of their national assets as alleged: there are other areas that we can tackle,” he said.

The Senator also called for the review of the sharing formula to encourage savings, stressing that states should not insist on sharing everything rather than saving.

He recalled the tough decisions President Olusegun Obasanjo had to take to save over $60 billion in foreign reserves against the wishes of many state governors.

He reiterated that selling the national assets in times of crises is not the only solution in solving economic crises.