Sanusi and the First Law of Holes – By Olusegun Adeniyi 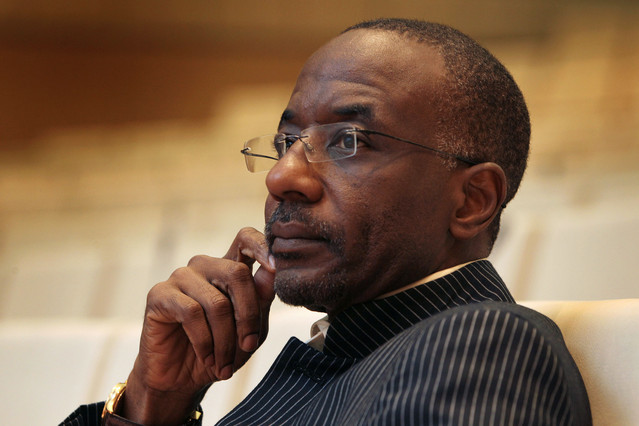 If you encounter one of Nigeria’s numerous street economists and you want to discuss the state of the nation, you are likely to be told that our country is so rich that it can afford free education, free health services and free housing for every citizen, if only we can eradicate corruption. While corruption is indeed a serious issue, the bottom-line is that Nigeria is not a rich country and has never been one. Yes, we had (and still have) the potentials to be a prosperous nation but that will not happen until we stop squandering our opportunities.

The challenge of the moment is that we don’t seem to have learnt useful lessons from our past as we continue to make the same choices that have led us to where we are today. And as conventional wisdom teaches, you don’t continue to do the same thing while expecting different results. That essentially was the kernel of the recent intervention by the Emir of Kano and a former Central Bank of Nigeria (CBN) Governor, Mallam Muhammad Sanusi II [image above]. The message from him is simple: In the unfortunate economic situation Nigeria is in today, the administration of President Muhammadu Buhari should apply the first law of holes which says that when you find yourself in one, you stop digging.

Speaking at a ceremony in Lagos last Thursday night, Emir Sanusi asked: “Does it make sense at this time for the government to continue paying petroleum subsidies? It does not! When you are not earning because oil prices are down, you have to shut down those expense lines that had been known historically to be the site of rent-seeking. Fuel subsidy has to go, our tax base has to expand, value added tax (VAT) has to go up. We can’t continue having an economy in which we collect tax from oil, collect tax from telecoms companies, and then 60-70 per cent of the Gross Domestic Product (GDP) does not pay taxes. This is something that has to be looked at.”

The Emir continued: “I know that the government has announced its position on exchange rate, subsidy and as you all know, I am a very strong supporter of this administration. I would like this administration to succeed. But a friend does not tell the government what it wants to hear. A friend tells the government when he feels it is wrong. So, it is wrong to continue with the fuel subsidy. It is wrong to continue to pretend that you can keep the naira at a certain level, when the price of oil is falling, without depleting your reserves. You have to make a choice.”

And then the warning: “If we continue along this trajectory, with the weak balance sheet of government and a tight monetary policy, in the face of falling oil prices, we are setting the economy up for a long period of very low growth and we cannot afford that given our population and given our growth rate…The president needs help on the economy and it is extremely important to understand that even if you have security, even if you fight corruption, you still need to have jobs, power, you still need to build agriculture, attract investments and that cannot be done if we continue dismissing the view of investors and foreigners who want to bring money into this country.”

Quite naturally, Emir Sanusi’s intervention has become a subject of an interesting national debate from which four broad schools of thought have emerged. The first one belongs to those who believe that the Emir is taking a dig at the CBN and his successor, Mr. Godwin Emefiele. That for me is a wrong reading of his thesis. I happen to belong to an exclusive online forum comprising a few Nigerians to which Emir Sanusi also belongs so I am aware of how defensive he is about the CBN and the sympathy he has for his successor whom he believes is managing a very difficult situation all by himself and practically alone in the absence of any economic team from the administration’s side.

While the Emir’s position on devaluation of Naira is open to debate, the point that should also not be missed is that if things continue the way they are (oil price slumps, dwindling tax returns, subsidy payments, unsustainable state interventions etc.), the matter of the proper value of the Naira could soon be taken out of the hands of the CBN and the administration. If that happens, the consequences would be very severe for everyone.

The second school of thought belongs to the opponents of President Buhari who are gloating that the Emir has merely validated their own assumption that Nigerians have at the helm a man who has no understanding of the challenges at hand and so not in a position to offer practical solutions. Members of this school have been celebrating, interpreting, interpolating and extrapolating Emir Sanusi’s statement to justify their own position. For this crowd, the only thing they can see in the intervention is that “Buhari is already coming under fire from his own people.”

The third school belongs to supporters of President Buhari who share the position of the Emir on the looming economic danger but believe that to whom you can whisper, you don’t have to shout. For them, since the Emir presumably has access to Aso Rock, he should have gone for a quiet discussion with the president to explain to him the implications of some of the choices he is making. So to this school, the pain for them is that the Emir’s intervention, however well-intentioned, has only strengthened the hands of the president’s opponents.

Finally, the fourth school belongs to those who believe–and I am a member of this school–that what Emir Sanusi did is purely a public service by helping to start a conversation on the choices we have to make at a very critical time in the life of our nation. And I believe that in so doing, the Emir has actually been of much help to President Buhari and his administration. What the Emir is saying in essence is that we can no longer afford wasteful spending but it would seem that this administration, based on the philosophy of President Buhari on state intervention, does not share this view. There is no area of our national life where this much is evident than in the oil and gas sector that is in dire need of critical reforms.

I am quite aware, as the Emir of Kano is, that the position being canvassed on the mismanaged downstream sector of our petroleum industry is not one that would earn him public acclamation. But we have reached a stage where those who love our country and believe in its future must be able to come out and make their positions clear on critical issues, however unpopular such may seem.

Subsidy, according to the NNPC Group Managing Director, Dr Emmanuel Kachikwu, “creates distortion in government revenue distribution as a result of round-tripping and unnecessary carryover of expenditures every year in a way that is difficult for government to control or sustain.” Yet Kachikwu sustains the subsidy regime because that is what the president wants despite the fact that you cannot even begin to fight corruption in Nigeria if you retain the number one rent enabler in the economy. And recording a loss of N38 billion within six months on three obsolete refineries whose total output does not even give us 20 percent of national fuel need makes no sense.

On the value of the Naira, common sense dictates even for laymen in economics like me that something is going wrong somewhere. Against the background that the difference between the black market rate of the Naira and the official rate is very wide, it stands to reason that there is indeed a serious distortion in the value of our national currency that is open to much abuse and does not lend itself to good economics. But as is typical in Nigeria where people leave the ball to kick the leg, all manner of ridiculous insinuations is now being given to Emir Sanusi’s well-meaning intervention on the precarious state of our economy.

It is exactly five months today that President Buhari was sworn-in yet if you speak to many business people, including the most ardent supporters of the president, what you hear are concerns about some of his policy choices even if they don’t say so publicly like the Emir of Kano has done. It will therefore serve President Buhari well to understand that we are at a very critical moment where the choices he makes (or refuses to make) would have consequences that could last several decades.

The point here is that Emir Sanusi is not fundamentally opposed to President Buhari. He in fact seeks to strengthen the president by reminding him that he cannot hope to appease his populist base with policies that do not in reality help the poor and may ultimately hurt the economy in the long run. In other words, I understand Emir Sanusi to be saying to the President: social welfare can only be funded by a free market that is freed of subsidies and unrealistic concessions.

What makes his intervention more significant is the indication that Emir Sanusi is one of the few people the president would listen to.

The Verdict by Olusegun Adeniyi email;olusegun.adeniyi@thisdaylive.com