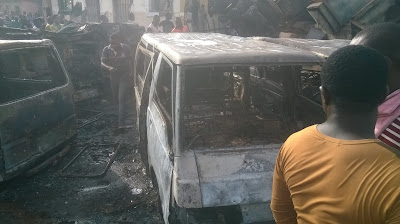 The scavengers were said to have set a refuse dump in a gulley ablaze ostensibly to easily detect metals, irons and other needed waste when the inferno suddenly extended and touched a nearby mechanic workshop where 17 vehicles were gutted by the fire.

Speaking on the incident, the chairman of the Mgbuka market, Chief Emmanuel Obiagwu, accused scavengers of causing the disaster.

He added that the dumping site was earmarked by the state Government for refuse dumping.

Exonerating the traders and himself from causing the fire incident, he said the motor mechanic is not part of the market.

“The owner of the mechanic workshop is not our member; he does not pay for security levy and other payments we make.

“He should not point accusing finger at me or my members.

“To show sympathy I mobilized some traders, and called on the fire service men who stormed the scene and quenched the fire if not it would have escalated to the market which would have caused more tragedy”

“I also informed the Awada Divisional Police Officer, (DPO) Mr Josiah Bakyu who immediately sent his men to the scene.”

“A victim who pleaded anonymity said, “the car engine I procured for N 1million and the car have been burnt.”

Another victim who simply gave his name as James, said “the devil has continued to tempt me”

Move by some organized youths who were mobilized to cause mayhem was thwarted by the Mgbuka chairman who sent his vigilance security men.