Schweinsteiger to get only as far as Jose Mourinho’s bench 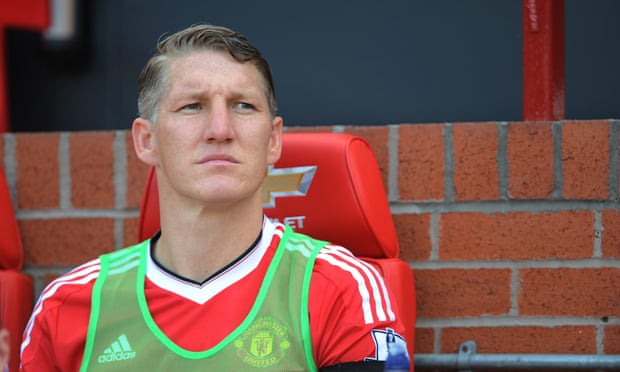 Bastian Schweinsteiger on Wednesday vowed to stay and fight for a place at Old Trafford.

His decision to stay follows despite having been banished to the reserves by Manchester United’s new manager Jose Mourinho.

Mourinho had indicated to out-of-favour midfielder Schweinsteiger on Friday that there will be no place for him at Old Trafford this season.

Yet, , he has been frozen out by United’s new manager.

Schweinsteiger, 32, has declared he will not join another European club.

Mourinho, however, suggested that if he stays, he may not even play in the Europa League or the English Football League Cup.

Asked if Schweinsteiger might play this season, Mourinho said: “I think it’s very difficult to happen.

“That’s five players for two positions. It’s difficult that a chance will arise.”

Mourinho admitted he is surprised Schweinsteiger is willing to see out his deal.

“He has a contract with Manchester United and has decided to stay. That’s not a problem for us.

“Football is about decisions. I’ve done that throughout my career. Not just me, everyone does.

“Some players react in a different way.

“Bastian is not speaking a lot, apart from the one statement he has made.

“He is free to do that in an objective and polite way like he did.”

Mourinho hinted that even the players in the club’s academy have more chance of getting a game than Schweinsteiger this season.

“I have 23 players in the squad and in principle nobody is leaving because I don’t want anyone to leave and no-one is coming, and 23 players is more than enough,” he said.

“If we have any kind of problem or opportunity, I have a few young players in the academy.

“And I will be more than happy to accelerate their development by bringing them up.

“I think we are going to have a very quiet week in the transfer window, not surrounded by helicopters waiting for people to arrive and leave.”

“I thought after I read some quotes from people at Bayern Munich that they would run to Manchester to bring him back.

“But no, it did not happen,” Mourinho said. I am quite surprised that Mr Rummennigge is not here.”

The United manager, who takes his team to Hull City in the Premier League on today, revealed that midfielder Andreas Pereira will be joining La Liga club Granada on loan.

The draw pitted his team against Dutch side Feyenoord, Turkish giants Fenerbahce and Ukrainian side Zorya Luhansk.

“It’s good for us because it feels as if we are in the Champions League,” he said.

“There are groups of a similar quality in the Champions League. We know it will be a difficult group.

“I think it’s good for the competition, which doesn’t have the same glamour in the Champions League.

“To have Manchester United in the competition playing against clubs such as Fenerbahce and Feyenoord is good for us.”

Troost-Ekong: I achieved my Olympic dream with Nigeria