The Nigeria Army has slammed former Governor of Ekiti State, Mr. Peter Ayodele Fayose, over his statement about a seized Army base in Mart, Borno State, calling him a “purveyor of fake news”.

The name-calling was contained in a banner posted by the Army on its social media platforms.

“Less than 4 days after President Buhari gleefully told Nigerians that security situation in the North-East under him is better than what it used to be, terrorists attacked and captured a Military Base in Borno State!

“A whole Military Base captured by terrorists!”

“Isn’t this a “job well done” by the President and his obsolete Service Chiefs? They are indeed “doing well for keeping the country safer than the President met it.”

“Now Nigerians can appreciate why I insisted in 2015 that Buhari lacked the needed capacity to rule Nigeria.

“As for Nigerians, we are all on our own waiting for God’s deliverance from these taskmasters.”

Less than 4 days after President Buhari gleefully told Nigerians that security situation in the North-East under him is better than what it used to be, terrorists attacked and captured a Military Base in Borno State!
A whole Military Base captured by terrorists!!!

Reacting, the Army, on its social media handles said it is “fake news”. See the banner: 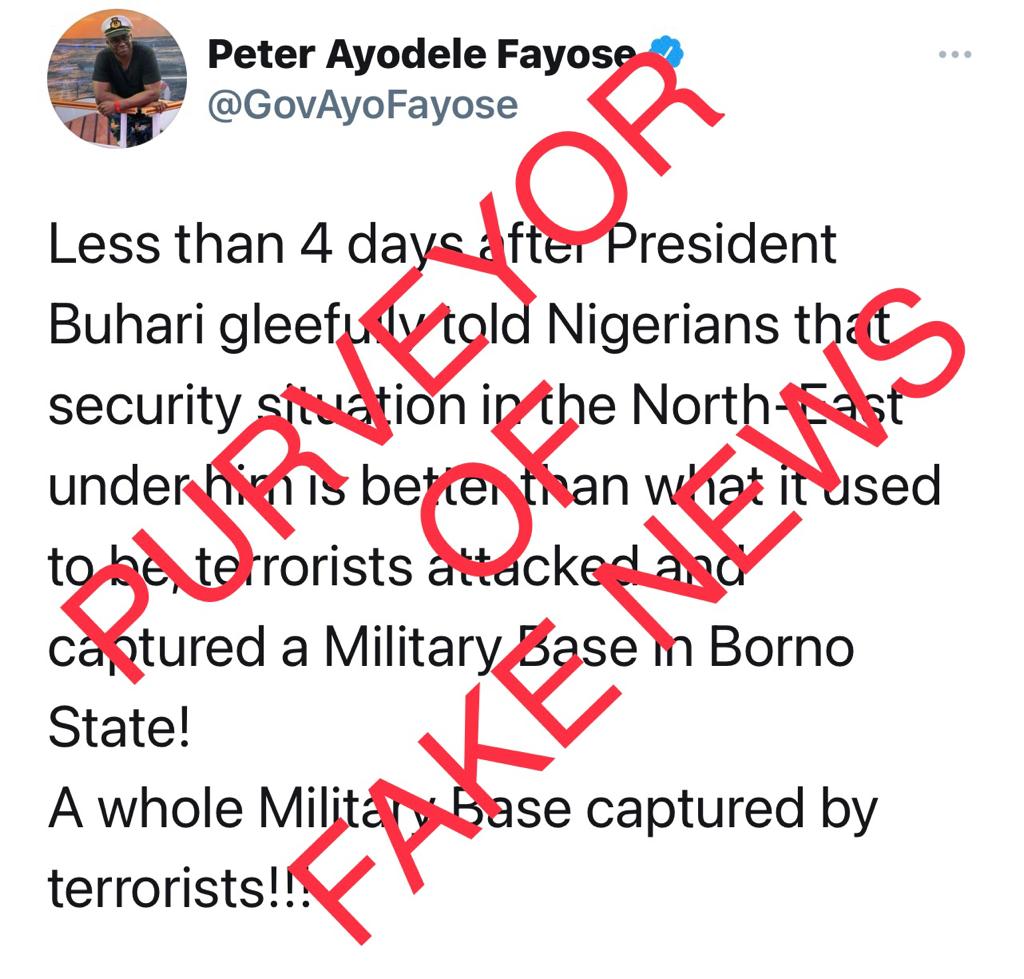 Group seeks actions to end all forms of stigma, discrimination

The Army rather posted pictured and videos of destruction of terrorists vehicles and facilities in Marte. It wrote:

“Following an encounter/ambush by troops of Operation TURA TAKAIBANGO against Boko Haram terrorists when they attempted to attack troops’ location at the outskirts of Marte, in Borno State, during which the Air Task Force Operation LAFIYA DOLE played a decisive/commendable role in the destruction of 7 terrorists’ gun trucks and decimation of unconfirmed number of the insurgents.

“The Chief of Army Staff Lt Gen TY Buratai, hereby appreciates and commends the troops, especially the Air Task Force Operation LAFIYA DOLE for their heroic and patriotic actions which resulted in the successes recorded.

“He urged them to maintain the momentum and expedite actions to ensure speedy final defeat of Boko Haram/ISWAP terrorists in Nigeria.”

Credible sources, however, revealed that ISWAP and Boko Haram actually seized the military base, forcing the troops to abandon the base and flee to safety.

The terrorists, however, met their waterloo when ground troops, backed by aerial support, ambushed their reinforcement team and dislodged them.

Read the full story below:

Sales rep in court for allegedly stealing wristwatches worth N33.8m

Group seeks actions to end all forms of stigma, discrimination