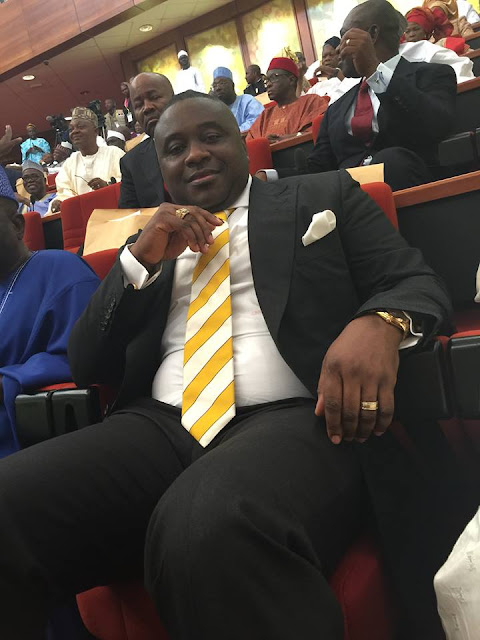 The Senate Committee on Gas Resources chaired by Senator Obong Bassey Albert Akpan has attributed the continued gas flaring in the country to flouting of  laws by oil companies on gas flaring and excessive ministerial permissions.

Senator Albert, who disclosed this at the inaugural meeting of the committee held on Tuesday, 24th November, 2015 at the National Assembly in Abuja accused international oil companies of deliberately flouting various rules regulating the sector because the country was not enforcing its law guiding the gas sector of the economy.

Senator Albert regretted that the mechanisms available to government to curb irregularities in the gas sector were not being fully utilized. “Despite the various policy regulating the sector, routine gas flaring still continues; companies are even satisfied paying penalties and the mechanisms available to government to curb these irregularities are not fully utilized due to excessive ministerial permissions, limited regulation and the incontrovertible position of NNPC in the Joint Ventures, “he said.

Senator Akpan assured that his committee would critically look into the economic, health and environmental degradation of the oil bearing communities caused by the continuous gas flaring in the country.

“Strong and effective legal framework must be put in place and sanction enforced against erring multinational companies to act deterrence. The time to act is now, ” Senator Akpan added.

While noting that a recent report showed that there was an increase of about 36.8 percent of cooking gas usage in Nigeria in the last three years, while over 80 percent of Nigeria household still relied on kerosene, firewood and other dangerous energy sources, the senator insisted that the committee would ensure that the federal government agenda of encouraging more Nigerians to embrace the usage of liquefied petroleum gas, seen to be clean, safe and affordable, was achieved.

He added that the committee would explore legal and institutional frameworks for oil and gas operations in Nigeria towards devising a strategic document that will complement the existing gas policies and dynamic implementation of the gas master plan.

Responding to questions from reporters , Senator Akpan said: “For me, I think there’s an act of the National Assembly that was enacted in 2008 which is called the Nigerian Gas Supply and Pricing Act, 2008.

‘That act actually stipulates what the domestic gas supply obligation of every single international oil company operating on the soil of Nigeria is, and that also stipulates the penalty on the issue of gas flaring.

“By the special grace of God, we will be engaging the various stakeholders from next week, Tuesday.

“Let us first of all come to term with the fact that there is a law guiding the gas sector and then begin to look at the areas where we can enforce the law, because what we have found out here is that the law is not being enforced.

“One thing is to have a law, another thing is for you to ensure that every stakeholder, every operator adheres strictly to the conditions of the law. So, we will be looking at the law because this is an era of the rule of law.

“We are going to carry out a very robust oversight and we will not compromise in terms of international best practices”, he said.

He also promised to make the passage of the Petroleum Industry Bill (PIB) a top agenda of the committee. According to Senator Albert, PIB will help President Buhari on the fight against corruption. “We will consult widely; my take on PIB is, let those non-contentious clauses in the bill be passed immediately”, he told reporters after the inauguration of some committees by the Senate President.

Senator Bassey Albert’s appointment as the Chairman, Senate Committee on Gas Resources was contained in the list of Chairmen and Vice Chairmen of 65 committees announced by the Senate President during the plenary on Wednesday, 4th  November, 2015. The Senate Minority Leader, Senator Godswill Akpabio was named Vice Chairman on Judiciary, Human Rights and Legal matters while Senator Nelson Effiong representing Akwa Ibom South Senatorial District was appointed Vice Chairman, Committee on Primary Health Care and Communicable Diseases. In all, APC got 41 chairmanship seats while PDP got 24.