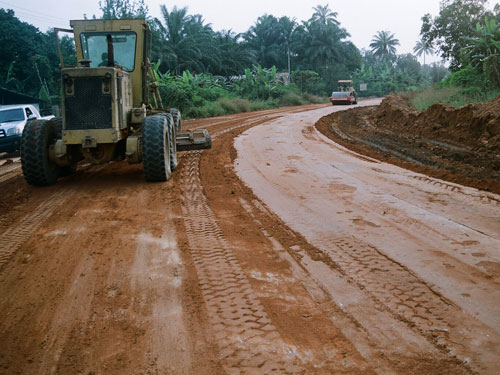 According to the petition submitted by Senator Ighoyota Amori on behalf of Agbarho (Urhobo) Improvement Union dated November 17, revealed the contract for the 23 Kilometer road was awarded in 2009 to Messers Serena Rocks Limited at the cost of the N2.4 billion.

Senator Amori explained ‎that the contractor has received N360 million for mobilisation fees in 2011 and another N360 million in 2012 from federal government to execute the contract but nothing to show on ground in the site.

He lamented that all efforts to by the community leaders to get the contractor met brick wall and NDDC is not forthcoming with information.

The petition which was co-signed by the community leaders reads,” we formally write to bring to your notice a clear case of massive corruption going on in NNDC relating to several development projects in the Niger Delta using our great kingdom Agbarho as a case study.

“After several years of neglect, in 2009, NDDC awarded the contract for the contraction of Agbarho Township Roads (23Km) to Messers Serena Rock Limited at a cost of Two Billion, Four Hundred Million Naira (N2.4b) only.

“After a long process of securing Presidential Approval for funding of the aforesaid project, in 2011 the contractor (Serena Rocks Limited) was paid N360.7m being 15 percent mobilization to commence on the project. In 2012 the contractor received another N360 million payment for the same project with nothing on ground.

Jamaica sent their athletes to Tokyo to wash Gold, we sent ours to…

“We were later told that the project design did not include stone base and drainage although in NDDC’s approved budget for 2011 and 2012 the project was captioned as “construction of Agbarho Township road with comprehensive Drainage”.

“All efforts by our community leaders to get the contractor (Serena Rock Limited) to execute the project has met brick wall and NDDC is not forthcoming with information.

“NDDC officials also confirmed to us that over N668 million is in custody of the contractor for over 5 year now without any job done on the project.

“We are not unaware of the Federal Auditor General’s findings of over N183 billion fraud in the Commission and we are persuaded that this is one of such case.

“NDDC official in the last eight years awarded several contracts to their cronies and made advance payments and sometimes full payment with little or no job done in the affected communities.”

The petition was referred to Senate Committee on Ethics, Privileges and Public Petition by Deputy Senate President, Ike Ekweremadu and to submit its report with four weeks.

Jamaica sent their athletes to Tokyo to wash Gold, we sent ours to wash jerseys —…