Senator Dino Melaye to be turbaned as Jarman of Okuta 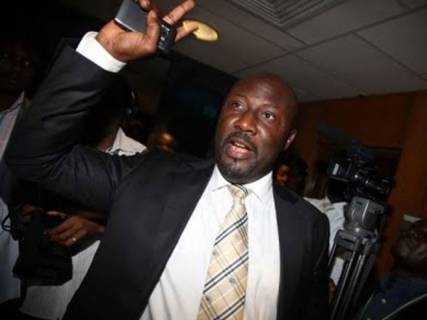 Flamboyant Senator and civil rights activist representing Kogi West, Dino Melaye [above], has added another feather to his cap with his planned conferment as Jarman (Chief Warrior/Defender) of Okuta in Okuta-Baruten Local Government Area of Kwara State.

The Senate President who read the letter on the floor of the Senate on Thursday in Abuja, said the turbaning would be done by His Royal Majesty, the Emir of Okuta, Alhaji Hon. (Dr) Idris Sero Abubakar FNISM, FHNR on January 9 2016 in his palace.

Already about 15 governors were said to have agreed to attend the turbaning ceremony.

Melaye who is the chairman, Senate Committee on the Federal Capital Territory (FCT), would be turbaned “for his contribution towards anti-corruption crusade, development of Nigeria and being voice of the voiceless.”

Speaking with journalists in Abuja, he said the latest conferment will make it the 16th Chieftaincy titled being conferred on him.

Among his Chieftaincy titles include Otunba of Bunu Kingdom, Kogi State; Balogun of Odo-Ape; Asiwaju of Oke Ofin and Arogundade of Okagi-Amuro.

“I thank the Emir for the deeming it fit to recognise me and this honour will further encourage and spur me to continue to champion public interest above personal interests”, Melaye said.

President Muhammadu Buhari and Vice Resident Yemi Osinbajo (SAN) will be at the occasion.

Apart from Saraki, other guests expected at the event include, Kwara State Governor, Alhaji Abdulfatah Ahmed; Emir of Ilorin, Alhaji Sulu Gambari and other distinguished Senators.

The governors of Sokoto, Borno and Zamfara States will be there while Ministers of Transportation, Rotimi Amaechi; Power, Babatunde Raji Fashola (SAN); Solid Minerals, Kayode Fayemi; Communications, Adebayo Shittu; Information and Culture (Lai Mohammed) and Aisha Abubakar are expected at the occasion.

The Inspector-General of Police, Solomon Arase; Minister of State (Interior), Khadijhat Bukar Abba; Speaker/Deputy Speakers, House of Representatives, Clerk of both Senate and House of Reps will also be there.