Dino Melaye is the controversial Senator representing Kogi West Senatorial district.
Melaye was a member In the House of Representatives, where he openly opposed President Jonathan Goodluck, calling his government the most corrupt one in Nigeria.

Melaye’s political career has not been spared of scandals and accusations.
As a senator, it was alleged that Melaye continued to operate a checking and savings account with a US bank, in violation of Nigeria law, a report he has not denied. Nigeria’s Code of Conduct Bureau strongly and clearly prohibits the use of foreign accounts by elected and public officials.
Melaye had threatened to beat up Senator Oluremi Tinubu and ‘impregnate’ her on the floor of the Senate.
In June 2017, an unsuccessful process to recall Senator Melaye from the National Assembly was kickstarted. The Senator characteristically accused the governor of “shooting the moon and boxing the air.”
He was arrested 23 April 2018 on the international wing of Nnamdi azikiwe Airport by NIS as they claim his name was on the watch list of the interpol after the Nigeria police declared him wanted.”
In May 2, 2018, Senator Melaye was arraigned in court by the Police on Wednesday at Chief Magistrate Court in Wuse Abuja. He was granted bail in the sum of N90million by the court, having met the bail condition but was rearrested by the police shortly after his release.
On July 24 2018, Melaye alongside 13 other Senators of the All Progressives Congress, APC, defected to the Peoples Democratic Party, PDP in Abuja.

The Nigeria Police laid siege at his residence for several days over a case of alleged attempted culpable homicide preferred against him by the force.

The police, in a statement by its spokesperson, Jimoh Moshood, while speaking on the reason for laying siege to Mr Melaye’s residence, said the senator, alongside his ‘armed thugs’, shot one Danjuma Saliu, a sergeant, in July 2018.
On the 5th of January after hide and seek game with the police officers, Dino surrendered himself at his residence in Abuja and few minutes later he slumped. 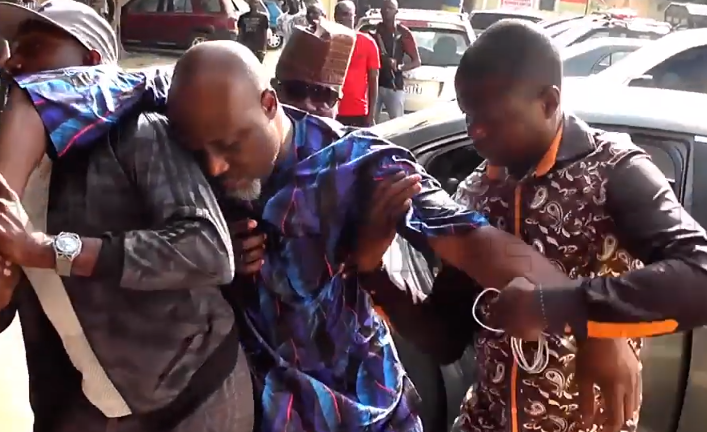 He was driven to the police headquarters but on arrival he was found weak and could not walk himself. It was discovered that he had acute asthmatic attack.
Yesterday The Nigeria Police Force gave update on the health condition of the lawmaker.
The Assistant Inspector General of Police, Medical, Mr Kaomi Ahmadu, speaking to reporters at the Police Hospital, Garki in Abuja, said Melaye was medically fit to stand trial.
Although, Senator Melaye claimed he needed further and better care, the AIG said the police would continue to provide good and quality medical assistance for the lawmaker.

Melaye was involved in various certificates scandals in 2017 including his claim to have obtained a Bachelor of Science degree in Geography from Ahmadu Bello University and a degree from the Boston-based Ivy League Harvard University in the United States. he claimed to have obtained the degree but not yet verified
Melaye who might face severe criminal charges that might undermine his political career if such scandals should prevail denies these claims.However, his colleague and former majority leader of his party (APC) Sen. Ali Ndume calls for the house to probe Melaye’s claims. Melaye claims not only did he graduate legitimately from ABU Zaria, but also, he has successfully earned seven degrees from various other institutions around the world, among them are Harvard’s University, Kennedy School for Educational Leadership and London School of Economics and Political Science; a claim that was since refuted by both institutions, with Harvard claiming Mr. Melaye only presented himself for a week long professional development course in late 2016. While LSE claimed there’s no evidence on its database that Mr. Melaye ever obtained any degree there.
Melaye was eventually cleared by the Vice Chancellor of Ahmadu Bello University, Ibrahim Garba who appeared before the Senate Committee to confirm that Senator Dino Melaye graduated from the school, although under a different name.

Melaye is currently unmarried. He was previously married to Tokunbo Melaye for ten years. She filed for divorce after a domestic violence dispute where she claimed that he beat her up and pointed a gun to her head. Shortly after, Alero Falope moved in with Melaye. Falope moved out six months later. Tokunbo had three children with Dino, and Mr. Melaye had another child with an unnamed woman in July 2016.
In May, 2016, Dino Melaye launched a book titled “Antidotes For Corruption: The Nigerian Story” which received backlash, given the perceived reputation of author.

The backlashes increased at the event as it was headed by the Senate President, Bukola Saraki, and former First Lady of Nigeria, Dame Patience Jonathan, who were both entangled in different corruption cases.
The book was also berated for its poor syntax, as ‘antidotes’ was expected to take the preposition ‘to’ against the ‘for’ that was used in title. Some quarters also described the book to be a mere “cut and paste” of newspapers articles, suggesting that the book has little or no original intellectual inputs from the author.

We must find these kids and flog them 😂😂#DinoMelaye pic.twitter.com/2ziOA0gi9j

Dino Melaye spoke from his hideout on the reasons why he will not surrender himself to the Nigeria Police Force.
Rather than debunk or admit the allegations made by the police, the lawmaker simply said in his last week tweet that he is being wise and not scared by hiding.
He compared his situation to the Bible records of Prophet Elijah knows as one of the strongest prophets that lived, but he went to Mount Carmel to hide when King Ahab sought him to kill him because of the way he boldly declared the truth.
“There is a difference with being scared and being wise,” Dino Melaye wrote on Twitter.
I WILL advise Senator Dino Melaye to end the current dilemma that he is in currently.
I will also urge the Police to adhere to the compliance with the relevant provisions of the penal statutes and the Constitution in the investigation and prosecution of his case.
Rather than laying siege at his house, the Police ought to have implemented Dino Melaye’s arrest according to the provisions within the Administration of Criminal Justice Act 2015.
I blame the Police for the sensationalizing the planned arrest of the Senator.
The fundamental right of every citizen to personal liberty is guaranteed by section 35 of the Constitution of Nigeria and article 6 of the African Charter on Human and Peoples Rights.
The right may however be violated by the State if there is reasonable suspicion that any citizen has committed a criminal offence.
The Nigeria Police Force recently announced its plan to arrest Senator Dino on the allegation that he has committed the offences of criminal conspiracy and attempted culpable homicide.
The Senator did not respond to the invitation of the Police on the grounds that the permission of the Senate President, Dr. Bukola Saraki was not sought and obtained.
Convinced that the Senator has decided not to submit himself for investigation, a team of police personnel have surrounded his residence with a view to affecting his arrest.
The siege to the house by the Police needlessly lasted for 6 days. It was reported that the supply of electricity and water to the house was disconnected by the Police.
Such action cannot be justified in law. There is no doubt that the Nigeria Police Force has itself to blame for the sensational planned arrest of the Senator.
The Police ought to have affected the arrest of the Senator under the relevant provisions of the Administration of Criminal Justice Act 2015 which empower the Police and other law enforcement to break into any house to arrest if there is evidence that any criminal suspect against whom a warrant of arrest has been issued by any court has absconded or is concealing himself or herself so that the warrant cannot be executed.
Now that Melaye has turned himself in, the Police should expedite his trial, lest prosecution turn to persecution.