Serena Williams shocked out of Olympics by Svitolina 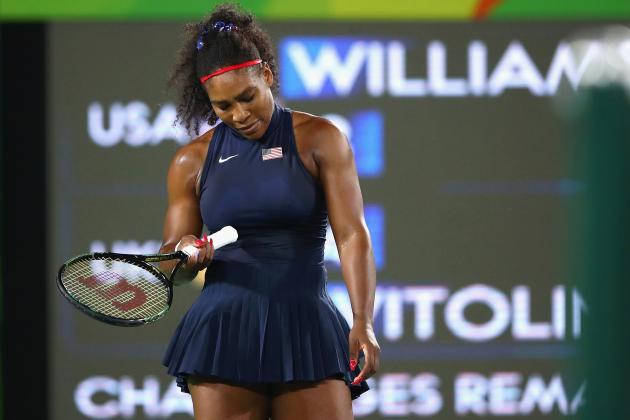 Serena Williams has lost her bid to retain her Olympics Singles title at Rio de Janeiro.

The World number one was beaten in two straight sets by Ukrainian Elina Svitolina 4-6 3-6 in the round three of the tournament.

Svitolina, ranked world number 20,  even broke her when she was serving 3-5 to seal the second set.

Serena, who played out of sort,  has now joined her sister, Venus who lost in the first round.

Both sisters also lost out in the doubles to complete a very disappointing Rio Olympics.

“The feeling is unreal, and I still can’t believe this match ended with a win for me,” Svitolina said after the match.

“I was trying to be focused because she’s a great player with great experience coming back in many amazing matches.

“In the end, it was just point by point.”

She peaked at No.14 in the world following a title run at the BMW Malaysian Open in Kuala Lumpur.

Her recent escapades can be attributed to her working with coaching consultant Justine Henin, a former World No.1 and recent International Tennis Hall of Fame Inductee.

Joshua set to defend heavyweight titles against Usyk in Tottenham…

But Svitolina had taken just one set from Serena in their previous four meetings, and was by all accounts the underdog against the four-time Olympic gold medalist.

Navigating through tense opening exchanges, Svitolina recovered from losing her early break advantage to reclaim the initiative and serve out the opening set in 34 minutes.

The second set saw a struggling Serena roar back from a break down to level the contest at three games apiece, but it wasn’t enough on Tuesday night.

However, she appeared to aggravate a right shoulder injury that forced her out of the Rogers Cup last week.

“In that moment, I was just trying to stay in the moment and focus on every point.

“She was struggling a bit, and I could see that if I pushed a little more, I could be on top. This was the key.”

Serena had given kudos to her opponent following her second round win, something which made the win all the sweeter for Svitolina, who grew up idolizing the World No.1.

“It’s amazing, and one of my dreams to play against her. I don’t think I ever dreamed of beating her.

“I think I’ll enjoy this moment so much, especially at the Olympics; I’ve always wanted to play here.”

Up next for the Ukrainian is No.11 seed Petra Kvitova, who is hoping to better her quarterfinal finish from the London Olympics in 2012.

Kvitova won a titanic three-setter over Ekaterina Makarova earlier in the day.

Among the players who made the fourth round are American Madison Keys, Johanna Konta of Britain and the German left-hander Angelique Kerber.

Others are Monica Puig from Puerto Rico, Laura Siegemund from Germany, who knocked out the Belgian Kirsten Flipkens, who had shocked Venus Williams in the first round.

Petra Kvitova from Czech Republic is still in the race for singles gold, just like Daria Kastkina from Russia, who knocked out Sara Errani, the Italian.