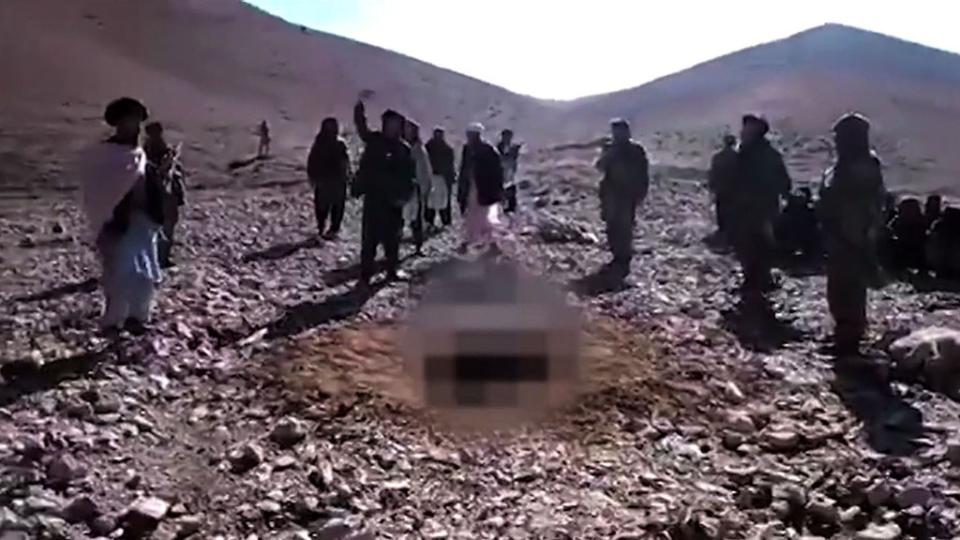 Image: Afghan officials said Rokhsahana (her image pixelated) was stoned to death about a week ago in a Taliban-controlled area just outside Firozkoh

A young Afghan woman was stoned to death after being accused of adultery, officials said Tuesday, a medieval punishment apparently recorded in a video that harks back to the dark days of Taliban rule.

The 30-second clip run in Afghan media shows a woman in a hole in the ground as turbaned men gather around and hurl stones at her with chilling nonchalance.

The woman, named by officials as Rokhsahana and aged between 19 and 21, is heard repeating the shahada, or Muslim profession of faith, her voice growing increasingly high-pitched as stones strike her with sickening thuds.

The killing took place about a week ago in a Taliban-controlled area just outside Firozkoh, the capital of central Ghor province, officials said, confirming the video which was sourced and released by international broadcaster Radio Free Europe/Radio Liberty.

“Yes, the footage shown in the media is related to Rokhsahana, who was stoned to death,” a spokesman for Ghor’s Governor Seema Joyenda told AFP.

Rokhsahana was stoned by a gathering of “Taliban, local religious leaders and armed warlords”, Joyenda said.

Joyenda, one of only two female governors in Afghanistan, said Rokhsahana’s family had married her off against her will and that she was caught while eloping with another man her age — seen as tantamount to adultery.

The man was let off with a lashing, Joyenda’s spokesman said.

Independent Afghan civil society activist women carry the coffin of Farkhunda, 27, who was lynched b …

The brutal punishment meted out to Rokhsahana highlighted the endemic violence against women in Afghan society, despite reforms since the hardline Taliban regime fell in 2001. 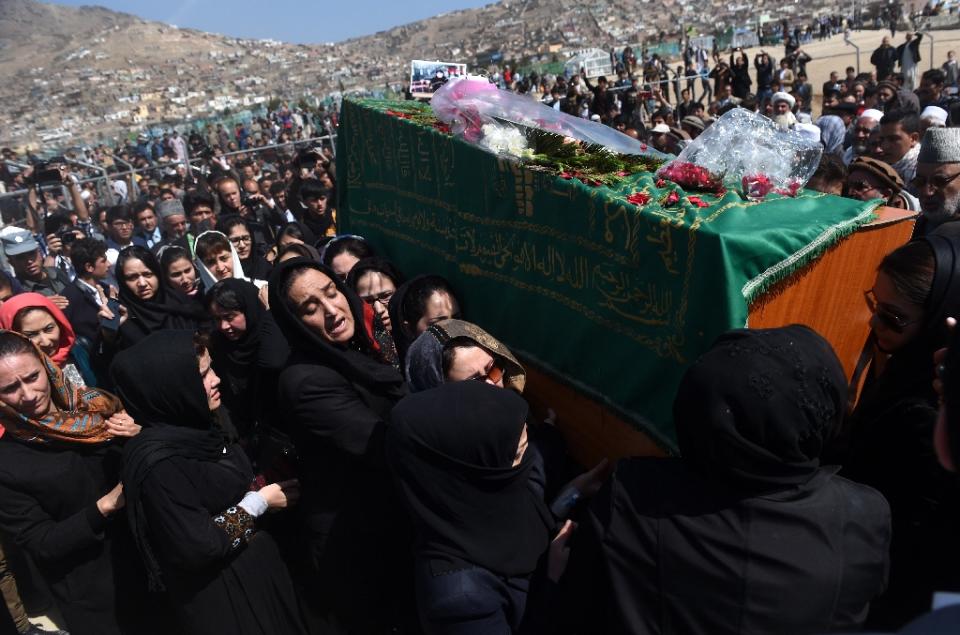 Independent Afghan civil society activist women carry the coffin of Farkhunda, 27, who was lynched by an angry mob in central Kabul on March 22, 2015. Hundreds of people on March 22, attended the burial of an Afghan woman who was beaten to death and set on fire by a mob for allegedly burning a copy of the Koran. The body of Farkhunda, 27, who was lynched on March 19 by an angry mob in central Kabul, was carried to the graveyard by women amid crowds of men, an AFP reporter said, a rare act of protest in a male-dominated society. AFP PHOTO / Wakil Kohsar (AFP Photo/Wakil Kohsar)

In March a woman named Farkhunda was savagely beaten and set ablaze in central Kabul after being falsely accused of burning a Koran.

The mob killing triggered protests around the country and drew global attention to the treatment of Afghan women.

Joyenda condemned the stoning in Ghor, calling on Kabul to launch a military operation to rid the area of insurgents and other armed groups.

“This is the first incident in this area (this year) but will not be the last,” she said.

“Women in general have problems all over the country, but in Ghor even more conservative attitudes prevail.”

In September a video from Ghor appeared to show a woman — covered head to toe in a veil and huddled on the ground — receiving lashes from a turbaned elder in front of a crowd of male spectators.

The flogging came after a local court found her guilty of having sex outside marriage with a man, who was similarly punished.

Shariah law decrees stoning as the punishment for men and women convicted of having sex outside marriage, but the penalty is very rarely applied in Muslim countries.

Public lashings and executions were common under the Taliban’s 1996-2001 rule, when a strict interpretation of Sharia law was enforced, but such incidents have been less common in recent years.

The Taliban have so far not commented on the stoning in Ghor.

Long condemned as misogynistic zealots, the militants have recently sought to project a softened stance on female rights.

But the insurgents’ recent three-day occupation of the northern provincial capital of Kunduz offers an ominous blueprint of what could happen should they ever return to power.

Harrowing testimonies have emerged of Taliban death squads methodically targeting a host of female rights workers and journalists just hours after the city fell on September 28.