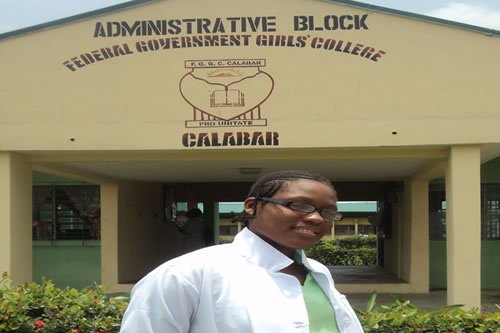 Elombah.com is in possession of a mail written by the lawyer representing Federal Government Girls College, Calabar [anonymous].

It detailed how the Department of State Security [DSS] attacked the college, molested teachers and destroyed properties belonging to both the teachers and the school authority.

The mail titled “DSS Invasion Of Federal Government Girls College, Calabar, And Why We Should All Lift Up Our Voices And Wail”, reads:

I got a call in the morning of Thursday, February 2 from Architect Njor Ntangha Tabi, a staff of Federal Government Girls College, Calabar.

He sounded agitated, frightened and incoherent. He was trying to say something about DSS, students, teachers, beatings, bullets and gunshots.

I tried calming him down but it wasn’t working. Incidentally I was in Calabar for another assignment.

I told him I will head out to the school once I was done with my assignment. That didn’t happen until hours later.

When I got to the school, it was late in the evening. I met a rattled bunch of teachers, all trying to tell me what happened at the same time.

A trained lawyer should know he won’t get the gist of what happened in such an excited babble.

I just gleaned what I could and scheduled a visit to the scene the following day and a series of interview in a temporary office they agreed to arrange for me.

Friday. 3rd February. I went to the scene and held a series of interview and came face to face with the grandfather of all impunity and the most bizarre thing that ever happened in an academic institution since man started learning how to read and write.

Mr Owai was able to fish out about 10 seniors who asked the juniors to sweep their class during school period contrary to school regulations.

He punished the seniors by flogging them on their palms, 2 strokes of the cane each.

One of the seniors, Grace Loveth Asuquo, grabbed the teacher by the collar of his shirt, protesting her flogging. The teacher was shocked and gave her more strokes for her action.

She told the teacher in front of the students that her parents will burn down the school today and stormed out of the class.

Mr Owai continued teaching, unknown to him that Grace has called her mum, who called her sister, is a DSS operative.

Half way through the class, the student’s mum, her aunt who is a DSS operative and another man, stormed the class, Gestapo-style, took the teacher’s canes and flogged him mercilessly before his alarmed students.

When the canes broke from the trashing of hapless Mr Owai, they descended on his frail frame and rained torrents of blows and kicks on him.

The screams of the students alerted the teachers who came to the rescue.

Grace’s DSS operative aunt called for reinforcement and before you can say “poor education funding”, 3 Hilux load of DSS operatives stormed the school.

The operatives went berserk and started shooting sporadically and hitting teachers with anything they could find: blows, kicks, stones, gun butts!

Several teachers sustained injuries from the assault and battery.

Some ran into adjoining bushes and farms to save their lives. Some of the teachers started taking pictures and videoing.

When the DSS operatives found out, they went after them, forcefully collecting their phones and further brutalising them.

Phones, monies, glasses and other valuables were taken away by the operatives.

When they were driving out, they found the gate locked. They beat up the security men and shut the padlock open!

They abducted the student, Grace Loveth Asuquo and left the school premises.

The entire staff and students of Federal Government Girls College community are traumatized and frightened. Classes didn’t hold on Friday, February 3rd because of this.

When did we get here and how?

The DSS, trained, armed and paid with tax payers money; using the arms we bought for them to harass our teachers before our children. What is this?

The management and staff of the school has instructed me to demand the following:

2. An oral apology given at the Assembly Ground before staff and students

3. Outright dismissal and prosecution of the operatives involved in this barbaric act.

4. To foot the hospital bills of all staff who sustained injuries during the assault.

5. To return/pay for all lost or damaged items like phones, monies, glasses, etc

I have the further instruction of the staff to file a suit in a court of competent jurisdiction to seek for redress and damages.

We must all wail against the excesses of our law enforcement agents. Their duty is to protect us and not to intimidate us.

A formal petition has been lodged with the appropriate authorities. But there is something we can do here:

Let’s stand up and shout against this barbaric intimidation by the DSS, if we don’t stand up now, there might be no one left to stand tomorrow.