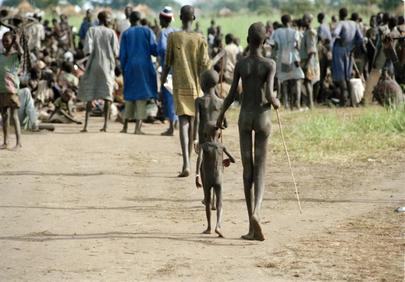 The leadership of Southern Sudan has been blamed for the lingering famine in their country.

The U.S. Department of State Spokesperson, Mr Mark Toner, in a statement described the famine as “man-made”. He blamed the leadership of South Sudan for the famine currently plaquing the conflict-torn country.

Toner expressed grave concerns by Monday’s declaration of famine in parts of South Sudan and lamented over the significant scale of humanitarian need throughout the country.

“This crisis is man-made, the direct consequence of a conflict prolonged by South Sudanese leaders who are unwilling to put aside political ambitions for the good of their people.

“We call on President (Salva) Kiir to expeditiously make good on his promise that humanitarian and developmental organisations will have unimpeded access to populations in need across the country.

“An estimated 5.5 million people – nearly half of South Sudan’s population, will face life-threatening hunger this year,” he said.

According to him, humanitarian actors are working tirelessly to reach those in need.

“All parties to the conflict must stop impeding relief efforts and allow food and other essential assistance to reach those who need it the most.

“The United States remains the single largest donor of humanitarian assistance to South Sudan, having provided more than 2.1 billion dollars since 2014.

“Our assistance, including more than 600,000 metric tonnes of urgently needed food assistance, has saved lives and helped avert famine for three consecutive years,” he said.

The U.S. called on donors and other members of the international community to provide timely additional humanitarian assistance to save lives and support the people of South Sudan. According to NAN.

Tanzania keeps foreigners on their toes

Weird! Boy, 17, Wakes Up On The Way To His Own Funeral