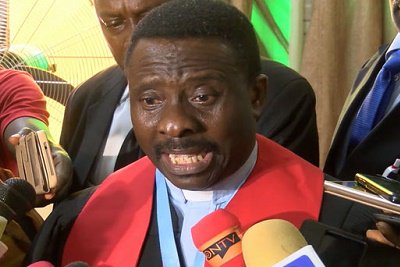 The Christian Association of Nigeria (CAN) has said the failure of the security agencies to arrest and bring to book those responsible for the killings in the Southern Kaduna is the reason why the crisis remains endless and charges them to wake up to their responsibilities.

This was contained in a statement issued by Pastor Bayo Oladeji, the Special Assistant (Media and Communications) to CAN President, Samson Ayokunle.

Despite the curfew and the presence of the Police and other security agencies in the volatile zone, the killings remain unabated and CAN called on its members to continue praying for the permanent restoration of peace in the area.

Speaking at the just concluded meeting of the National Executive Committee (NEC) of the Christian umbrella body held in Abuja, the CAN President, his eminence, Rev Dr Samson Olasupo Ayokunle, could not hide his disappointment in the unending killings and the treatment of those responsible with kid gloves.

“All of us should organize prayers again and if possible with fasting to seek the intervention of God so that this senseless destruction of human beings might stop.

“I think what has encouraged this type of carnage in Southern Kaduna is the inability of the law enforcement agents to apprehend the criminals responsible for these killings and if they were apprehended at all, they were not conclusively prosecuted.

“We have had these days more often than not, the law enforcement agents saying that the criminals are ‘unknown gun men.’

“Whose duty is it to know them? It is not the law enforcement agents?”

Speaking further, Ayokunle disclosed the plan being made by the National Secretariat of CAN to provide relief materials for the victims of the carnage in both Southern Kaduna and the Agatu community in Benue State.

“We are planning to visit Southern Kaduna to distribute relief materials to the victims of the massacre there.

“We planned to do this earlier and chose date but we couldn’t go because we received security report that it was not safe to do so.

“We would equally visit the Agatu community in Benue State to distribute relief materials.”

The CAN President also charged its members not to cease praying for President Muhammadu Buhari, the Acting President, Prof Yemi Osinbajo and a quick recovery of the economy from the recession to relief the populace who are under its consequences.

Said he, “I urge all of us to be praying for the President of our country, President Muhammadu Buhari who is sick and is out of the country for treatment; we had twice released our pleas for prayers for him. It is our spiritual and legitimate duty as people of God. We should also pray for the Acting President, Professor Yemi Osinbajo that God might guide him aright this time when he acts for his principal.

“We should organize prayers, if possible vigil at every state secretariat of CAN to pray for our country at a chosen date and that the FCT CAN should come to the national secretariat for their own. In each centre, the governor of the state or his representative should be invited to such prayer meeting”.

On the economic recession, Ayokunle noted, “With the way our economy is going and violence is increasing without much answer from the law enforcement agents, we need divine intervention.”

CAN also notes with dismay the destruction of church building in some parts of the country while the law enforcement agents seemed powerless.

“Churches were destroyed in states like Jigawa on the excuse that they did not get building permit whereas they had applied for many years without being given the permit.

“ Recently, a Redeemed Christian Church of God was burnt down in Dei- Dei, here in Abuja very early in the morning.

“What shall we do to these continuous provocations without any visible action by the law enforcement agents?”

CAN calls on all and sundry to support CAN TRUST FUND because “it is the answer to the paucity of funds for operation in CAN” reminding them that without sufficient fund, the CAN leadership might not be able to discharge all the constitutional responsibilities including the Save Our Souls cry from its members.

The well attended meeting by all the principal officers, national officers, zonal and state leaders prayed for the unity of the body of Christ and the country including President Buhari and the government at all levels.

Deal for repatriation of victims of Boko Haram