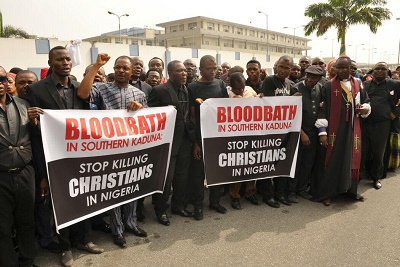 Hundreds of Christian clerics under the auspices of Christian Association of Nigeria (CAN) staged a peaceful protest to the gate of Government House, Port Harcourt, demanding an end to the Southern Kaduna killings.

The protesters were  received at the Government House, Port Harcourt gate  by the Representative of Governor Nyesom Ezenwo Wike and Chief of Staff, Engineer Chukwuemeka Woke . The Christian leaders  presented a letter for President Buhari  to the representative  of the governor, asking him to transmit same to the President.

In an address on behalf  of the Rivers State Christian Association of Nigeria  (CAN), Primate ICT Anyanasikike called on President Muhammadu Buhari to end the genocide in Southern Kaduna. 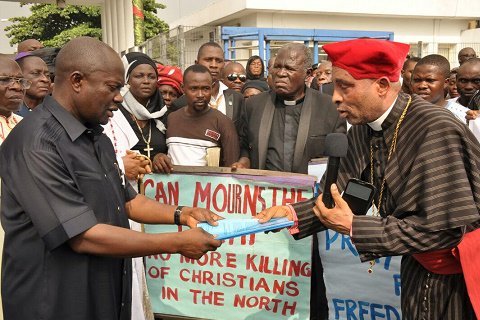 The Rivers CAN called on President Muhammadu Buhari to rise and confront the hydra headed monster of Islamic Jihadists.

They further urged the Federal  Government  to  declare  a national day of mourning in the nation.

The Rivers CAN Chairman declared: “Let Mr President allay the fears of the people in the current imbalance which clearly exists in the appointments of security personnel, agencies and managers of national security”.

They called on the Federal Government to begin the process of  reconciliation, reconstruction and rehabilitation of  affected communities  in Southern Kaduna. The Rivers CAN called for the restoration of all the villages occupied by the Islamic fundamentalists and compensation  paid to victims.

In his response, Rivers State Governor, Nyesom Ezenwo Wike assured the Rivers CAN leaders that  their letter would get to the President.

He urged them  to remain  peaceful, pointing out that development can only take place in an atmosphere of peace.

The governor  said  that his administration  will continue to  promote  religious  harmony through its programmes.

He said: ” I thank  you  for your peaceful  disposition  in the course of  your procession. I have  received  this  message  on behalf of the governor and the message  will be passed to the President.

“Let me  also assure you that Governor Wike  believes in one indivisible  Nigeria.He believes in the rule of law and the freedom  of association that is why in Rivers State, there is no disharmony  in terms of religion.

“Our Government  suports religion, our government  supports God. We believe  that  except  God builds  a city, the builder builds in vain.  We are recording  success in the security  of the state because God is involved “